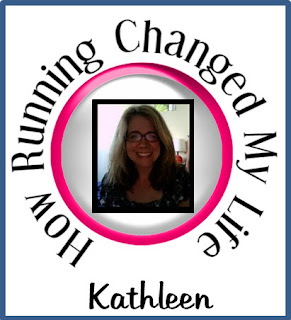 Kathleen, like many runners, had a previous life when running much less runner would not have even been in her vocabulary. Me run? Ha! Ha! Ha! But like many, Kathleen decided to turn her life around by losing weight. This lead to many more things for Kathleen. In her own words, here's Kathleen's story.
How has running changed my life? I always hated to run. I hated the side stitch. I hated the panting. Most of all I hated the pain (and embarrassment and street harassment) from bouncing without adequate support. So I didn't run unless I had to. Like when the gym coach was yelling at me or (much later, of course) needed to chase after my children.
The natural consequences of not running—aging, childbearing and about 20 years of eating (not so well)—were that I managed to go from being an unathletic, but generally healthy young person, into an obese 40-something.
I didn't plan on running; I did decide I was going to lose weight. After about 50 pounds of weight loss, during which I was walking (uphill, on the treadmill) for my exercise, I went to the doctor for a physical. He asked about my exercise, and I told him about my walking. He said, "Do you think you could speed it up a bit? Maybe run?" I'm thinking, "No frickin' way!" But the seed had been planted. I knew people who were runners. A few of them were just moms like me.
Around this same time, my weight loss stalled a bit. So, I figured—what the heck. I'll run. It might help. The first thing I did was experiment until I found a chest-binding system that actually worked (two bras, two T-shirts). Then I just got out there. At first, I couldn't run for even a quarter of a mile without stopping. So I jogged as long as I could. Then walked. Then jogged again. Instead of going fast and getting winded and then discouraged as I had done in the past, I started off slowly. I concentrated on time spent running, not worrying about the fact that I was going really slowly. 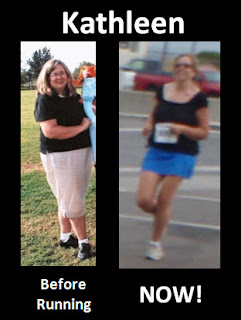 Within two months of starting running, I was able to run for 30 minutes straight. A few months after that, I could do long runs of more than two hours. I learned by reading books by John Bingham, Suzy Favor Hamilton and Jeff Galloway. And I'd read the running blogs, of course, even though most people who blog about running actually have some talent (or at least speed) at it. I, on the other hand, do not. I'm definitely a middle- to back-of-the-pack runner. But I love it.
-
I love feeling my muscles ache and then strengthen. I love the layer of salt that covers me after a long run. I love the better sleep, the energy boost, the little endorphin rush that comes afterwards. Through running, I've also made peace with my body. Losing the amount of weight that I have (90 pounds) has shaken up my life in some ways, as I look dramatically better than I did before and that affects my interactions with others. But running lets me focus on the more important things about my body—what it can do.—Kathleen

90 lbs! That's amazing Kathleen! Kudos to you! And look at you now, running 2-hour long runs! That's awesome! Every time I have a salt-encrusted run, I'll be thinking of your determination and drive! Thanks for sharing your story! Be sure to check out Kathleen's blog!
Posted by RunnerDude at Monday, November 16, 2009

90 pounds? THAT'S FANTASTIC! Congrats Kathleen! (You look terrific, by the way). Way to take running at your own pace and excel...speed just comes with experience and training--it's not something that should make you feel less of a runner. You run two hours at a time (that's a heck of a lot more than I have run!). Again, congrats! :)
Great post, as usual, RunnerDude.

Yay for Kathleen!!! From a fellow 'middle to back-of-the-pack runner,' I applaud your efforts and determination.

(I also like Runner Dude's blog.. haven't read any 'guy perspectives' yet - you'll be my first, RD!)

As a self-proclaimed 'turtle runner' and diabetic late bloomer, I understand the importance of getting healthy, so kudos to Kathleen for doing such an amazing job!!

Great story! I can really relate. I use to scoff at the idea of running too, but now I love it.