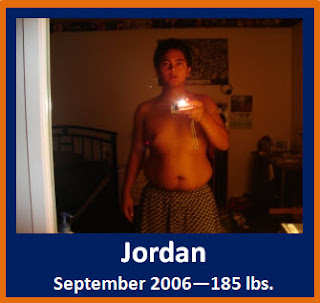 Jordan, unlike many, realized at an early age he needed to change to a healthier lifestyle. But like so many, he also found that sticking to a healthy lifestyle is a life commitment. In his own words, here's Jordan's story.

Born and raised in Michigan, I was the “class clown” in high school, and my figure was Farley-esque. I even imitated the old Saturday Night Live Chippendales sketch during a high school talent show! In college, I never taught myself how to eat right, skipping breakfast every day, and stuffing myself silly at lunch and dinner. At one point during college, I had over 200 pounds packed onto my 5′6″ frame.


The extent of my cooking skills boiled down to… boiling pasta. Not knowing portion control, I used to eat an entire BOX in a sitting! Preparing for a summer vacation, I rode a bike and started running. Out of shape, all I could do was jog the straightaway on a track, then I would lose my breath and walk the curve.


During and after the vacation, I ate and drank all the weight back on. Once I got out of college, I worked a job as a door to door salesman, and had cheap fast food for lunch EVERY. SINGLE. DAY.


In a job I hated, gaining more and more weight, things were not going well. I remember standing in my room after a shower one day, holding my enormous gut, thinking, “This is not good, and has to change.”


I realized I was wasting my life and would die prematurely if I kept up my ways. I began a new job, and during my lunch breaks I would jog around the office.


In October 2006, I ran my first 5k. I got hooked on the excitement and energy of a race, the feeling of accomplishment. I made it my 2007 New Year’s Resolution to run the Detroit Marathon. I stopped devouring huge meals, and instead devoured material on fitness. 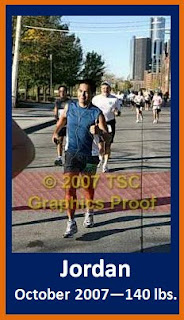 of cardio with free weights, along with bikram yoga and trying to learn to swim, the weight flew off. I learned how to cook, control my portions, and listen to my body.
By October 2007, I’d lost 45 pounds, and completed the Detroit Marathon, a crowning achievement for me.

Content with my accomplishment, I eased up on running. I partied hard, eating a “pre-game” meal (to “soak up” the alcohol), having my booze, and of course, the post-drinking meal (affectionately known as “late nite” or “4th meal”).


My performance began to slip at work, worse and worse each month, and at the end of January 2009 I was fired. I fell into a tailspin, deciding on a whim to move to Chicago, without any job prospects, direction, or motivation. For months I would go out, living off my unemployment and savings, trying to drink and eat my problems away. I considered myself the modern day Peter Pan.


The number in my bank account reached $0.00, the number on the scale reached 170, and I turned 25. I realized I didn’t have any control over that last number, but was fully responsible for the first two. I accepted the reality of my situation, and worked to change it. I began running again in earnest, and spent more time applying for jobs.


Slowly but surely, I am removing the nasty unhealthy habits that have snuck into my life, and replacing them with healthy ones. I have learned that it is often harder to keep lost weight off than it is to lose it in the first place. It is a challenge I fully accept. I have armed myself with a new list of goals to accomplish and races to run.


Settled into Chicago and beginning a new job in October 2009, it’s full steam ahead. I hope you follow along my trials, tribulations, miles and smiles from here to the Chicago 2010 Marathon!


Thanks for sharing your story Jordan! Health is a life-long commitment. It's tough at times, but you're well on your way to a long, healthy, and happy life. Kudos to you for your stick-to-it-ness!
Posted by RunnerDude at Monday, November 23, 2009

What a great inspiring story about how running can turn someone's life around! Congrats, Jordan! Definitely want to hear how your next marathon goes.

Wow! Great job, Jordan. Most people don't recognize when "something needs to change." Looking forward to seein how your next marathon goes!

Keep it up, Jordan.
I hope the new job is going well.
You have completed one marathon and you can do it again!!
Sometimes we all slip up and some of those pounds we lost find their way back. Good news-we can lose them again and we are more committed to keeping them off for good!!

This is really great. Jordan...you rock!