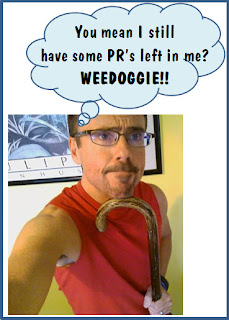 Guess what?! In a blink of an eye, I'm no longer the youngest. Quite a twist of fate. I'm one of the oldest students in my personal trainer/nutrition consultant certification class. My young whipper-snapper of a workout partner the other day, asked me when I started running. I had to tell him, "Before you were born." That hurt.
It's funny hearing the 18-, 19-, and 20-something-year-olds in the class talk as if when you reach your 40s you're basically washed up. I and the students older than me in the class (in their 50s) quickly correct this thinking. But, it is funny how so many young folk and even some seniors think you're doomed after 40, 50, or 60. These doomsdayers need to meet a group of senior ladies from my church that are some serious walkers. These ladies can book! I dare say they could teach those youngsters a few things.
Well, one thing I've noticed as a runner, is that the competition doesn't get easier as you age. Matter of fact it intensifies! In my 30s, I often placed in my age group. Now that I'm in my 40s it's getting harder and harder to place. And, not because I'm getting slower. Oh contraire...my competition is getting faster! 50+ year-olds running sub 20-minute 5Ks! I'm having to find more and more small-town races with fewer people in order to place. Ha!
My original thinking was that, if you're still running in your 40s and 50s, the fair-weather runners have been weeded out and the ones left are hard-core. That may be a factor, but I ran across some interesting research that says older runners actually pick up speed quicker than younger runners. So, instead of getting slower, in many cases, they're getting faster!
Peter Jokl, M.D., professor of orthopedics, and his co-authors, Paul Sethi, M.D., and Andrew Cooper, all of Yale School of Medicine did a study that showed marathon runners 50 and older, and female athletes in particular, are showing greater improvement in running times than younger runners.
Jokl and his colleagues looked at the running time, age, and gender of all of the runners in the New York City Marathon (415,000 runners total) from 1983 through 1999. In addition they evaluated the performances of the top 50 male and top 50 female finishers by age categories. They classified Master Athletes as those 50 and older.
The study showed that women marathon runners ages 50-59 improved their average race time by 2.08 minutes per year. This was a lot greater than male runners of the same age whose running time improved on average about eight seconds per year. However, older male runners increased their running time at a much greater rate than younger male runners (ages 20-30). The younger runners (male and female) did not significantly improve their running times.
Who had the most significant trends in improved running times? Surprisingly enough, the study showed that the most significant time improvement occurred in the male category age 60-69 and 70-79, and for women ages 50-59 and 60-69. Grandma and Grandpa, you rock!
-
[Click here] to check out a post from my blogger friend, Thomas, about how masters ultra runners are getting better with age too!
Posted by RunnerDude at Saturday, October 24, 2009

You are so right---older doesn't mean slower--the most competitive and fastest group is in my running club is the 50-60 yr old men! And the thing is at group has always been fast! crazy. I get passed by people old enough to my grandparents daily---and yes as I stare 30 in the face I like it when I pass by high school runners. Keep running, you're only as old as you let yourself feel!

Hi Kristin! Definitley agree. Age is realtive. Hopefully we'll both be running for a very long time. I too love passing high-schoolers. LOL!

Take that, younger me!

I'm right there with you. I always used to be the youngest at work, play, etc. The other day my 29-year-old chiropractor made some joking reference to "how freaking old" I was. I am SO stiffing him on payment.

Hey Dena! Just make sure you stiff him after he does your last adjustment! LOL! OUCH! You looked awesome running today so soon after Chicago! Super Dena!

Hey Runner Dude, I'm right there with you on being the oldest in the class! I am the oldest student in both of the classes I have this semester and I have the highest grades. In my Human Biology class I just got the highest grade of the whole class on the midterm!(98%)
Don't you just love it when you place 5th or 6th in your age group and look at the results and you beat the 25-29 or 30-34 winners!
Another thing is that when we get up here in our 40s and beyond the kids are grown up so we have more freedom to do what we want- if we want to do a speed workout every Wednesday after work we are free to once there aren't soccer practices or t-ball games anymore. For example, the other day somebody told me they just heard about a halloween themed 5K Saturday night (tonight) at 8pm, I didn't even have to think about it and said, I'm going! It feels sooooo good after all those years of everything revolving around kids!!! (don't get me wrong, raising kids was great)
There's a study from Stanford Univ Med school titled "running slows the aging clock". I wrote a paper about this for my english class. So not only are the older runners getting faster but also keeping the onset of disability away by an avg of 16 yrs. (yes-16) That's good to know!
Sooo, soon I'll be donning black running clothes with a big orange pumpkin tshirt over top so I can go look absolutely silly and run a 5K in the dark!!

You're awesome Lorenda! You blow out that Pumpkin 5K!!!!

I agree! As a 51-year old having improved my recent marathon time to 3:25 (a personal record without any age-adjust) I'm amazed by all the other runners who are able to do a marathon in significantly less than 3-hours. Frankly, this doesn't bother me, though. I'm truly not competing against anyone but myself, and having the benefit of begun serious running only in the last 5-years it's a truly moot point what my P.R. might have been had I seriously run in my twenties, and in that sense starting running at the mid-point of my life has proven a huge blessing. In any case, there are some factors which those of us in our 40's and beyond have to recognize (which I must admit I unfortunately ignore from time to time) - most importantly to *listen to our bodies* and to be aware of a potential developing injury *before* it strikes! In retrospect, had I been more attentive to such warning signs over the past year I would have avoided my first serious case of Achiles Tendonitis a minor stress fracture (though both healed quickly all-in-all I would have been happier to have entirely avoided these annoyances!) Message to everyone, regardless of our birth year - KEEP RUNNING! Doing so keeps us alive and well both physically AND mentally!

Hi Mark! True so true. Definitely have to be tuned-in to your body as a runner at any age, but particularly as an older runner. Have to be more proactive about aches and pains, but given that, it's good to know we have many more years of running ahead of us!

I remember reading in Cristopher McDougall's "Born to Run" that if a runner started running at 19 years of age they would peak at year 27 but would not decline back to the 19 year old level until their 60's... Basically seems that amount of training is almost always the limiting factor to a runners performance rather then inherent ability... i.e. as long as you consistently put in the work you should keep improving for quite a long time.

Thanks for this post! I've been up and down the past year and after a tough race about a month ago, my mom informed me that I was "getting older..." Nice, I know.

I think it wasn't age -- it was just where I was mentally on that day. I still expect PRs in the future!!!

Thank you, I love this post. I'm nearing my big 4-0, on Nov. 6th to be exact. I'll be celebrating by running my second marathon on Nov. 1st.

I've been having mixed feelings about this upcoming birthday, and mostly resenting it. But, then I get so inspired by runners who just keep it up and keep getting better.

There are great runners who achieve great things with prosthetic legs, so why should just a number stop anyone, right.

Damn, I hope you're right about getting faster as you get older. As someone who just started running in February at age 41 (now 42), this would bode well for me. Especially after that scathing NY Times article last week questioning the participation of "plodders" in marathons and Pearl Izumi's lovely ad campaign bashing "joggers".

I am taking a running class that is supposed to help with this.

I always find it amusing when I meet 25 year olds and the like; I was graduating HS when they were born. And like you, I used to be the baby in everything I did, no more.

Wow, 45!? I would have never guessed that. Kuddos to you!

That is interesting about the compitition as you get older. Here I was hoping on maintaining my current speed and totally cleaning AG house when I got older! No such luck :) Guess I'll have to stick with the speed work afterall.

Hi EZEthan! Great points! There was a great article in Runner's World a while back that featured some senior runners who started late in life running and it was amazing how far they progresss in such a short time and I'm talking about runners in there 70s and 80s! Cool!

The Happy Runner! Oh, you definitley have lots of great runs and PRs ahead of you. Nothing against your mother, but I think the easy way out for a lot of people is to just say, "oh well, you're getting older." I definitley am a believer in if you don't use it, you lose it. I think we're "users and keepers." LOL!

Hey Regina! A plus for starting running later in life too, is that you don't have all those year of pounding! So you'll probably stay injury-free a lot longer!

Hey Adam my man! You just made my day!!!

There's hope for me yet! 40 and getting faster, I love it!