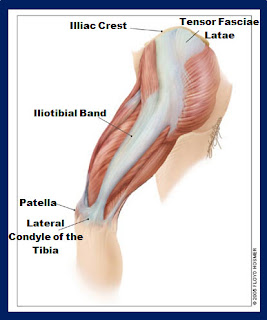 ITB (Iliotibial Band Syndrome) is one of the most common aliments of runners. ITB often presents itself as pain on the outside of the knee. Overpronation or underpronation can often be the cause of ITB, but more than not, it's due to inflexibility.

Runners often think ITB is a knee problem. That's because the pain along the outside of the knee is the end result. Actually, the Iliotibial Band is a part of a longer tract which includes the Tensor Fasciae Latae (TFL) that originates at the iliac crest continuing down to the Iliotibial tract and attaching to the tibia in the lower leg just below the knee. This muscle braces the knee when walking. Without the iliotibial band your leg would collapse. Handy muscle, huh?
The real culprit often causing Iliotibial Band Syndrome is the 9-to-5 job desk job. Think about it, if you sit at a desk for 8, 9, 10 hours, your hip flexors aren't living up to their name. They're not flexing. They're stuck in the same bent position, getting tighter and tighter. Then you hop up and go for a run most times without any stretching before or after. A combination that spells Iliotibial Band Syndrome over time for some.
Stretching is one of the best ways to help recover from Iliotibial Band Syndrome as well prevent it from happening in the first place. [Click here] for some great stretching and strengthening exercises for Iliotibial Band Syndrome from Running Times.
Stretching of course isn't the ITB "cure-all" for everyone, but it is worth talking to your sports doc about. Also, if you haven't experienced ITB problems, starting a regular stretching routine consisting of dynamic stretches before your run (i.e., stretches that are comprised of active movement specific to running such as butt kicks, knee lifts, jump squats, side shuffles, etc.) and static stretches after the run (more traditional stretch-and-hold type movements) will hopefully keep you ITB-problem-free. For more information on dynamic and static stretches [click here.]
Posted by RunnerDude at Tuesday, October 20, 2009

Thank you! This was really a help and just what I needed to read tonight!!!!

Hi Michelle! You're so welcome! Let me know how the stretches go! Great blog by the way!

Well you knew I would have to weigh in with my theoretical pontifications.

When I was in high school studying to be a famous actor, one of the prerequisites were ballet classes. I wore karate pants, usually. Just thought you'd appreciate the visual.

Anyway, I was stretching all the time (I wasn't in very good shape, but I did manage the classes alright, but I was a terrible dancer), but never got more flexible. Not even stretching through college did my flexibility improve. Do you think some people are just more naturally elastic than others?

Maybe the ITB issues that drove me to barefootery (I'm making that a word) may have largely been a result of a lack of flexibility, which for whatever reason I needed when wearing shoes? I tried mild stretching, no stretching, mega stretching; the only time I was able to handle the marathon distance I was doing the mega stretching, painful bouts with the ITB log.

Now the only time I stretch is the standard yawn stretch in the morning, maybe a little after a run if I think it will feel good. I don't even think about ITB anymore. I don't know why transitioning from a bouncing jogging form to a barefoot running form would have this effect, but it seems to.

I was having just the knee discomfort you speak of and a couple of very nice people pointed out it might be my ITB. I've been stretching and using a foam roller and it seems to be helping. Thanks for bringing this to light.

Hi Southofthecliff! Yep. Figured you'd weigh in. LOL! Like I said in the post, stretching may not be the "cure-all" but definitely worth a try. Obviously your ITB was not due to tight hip flexors causing youre ITB to be tight. However, there are numerous people (myself included) who have found emmense relief from doing simple exercices/stretches on a foam roller. The biggest point is for runners to realize that the pain they may be feeling outside the knee probably isn't knee-related and that stretching may be an effective way to relieve that pain or prevent it. Definitely worth exploring the stretching along with other options such as your barefootery.

Hi Regina! A foam roller hurts like the dickens, but it does a great job in stretching areas like your ITB. Hope it continues to work of you!

This is a timely post for me, as I'm feeling it in both legs as I recover from Triple Lakes and start tapering for Outer Banks. (Uh, what was I thinking?!)

WONDERFUL information! I had SO many issues with this back in April-and I had a lack of information on ITB! Thank you!!!! I will be testing some stretches out tonight!

I also tried out a bunch of stuff for ITBS and ended up creating a series of text modules and videos to help people recover, since stretching sometimes doesn't completely fix the problem. You can check it out at http://www.bulletproofknee.com

Had IT band problems my entire collegiate career...I lived and died by stretch #2 from that link you posted. Great post!

I've been dealing with horrendous IT band issues for 9 months- nothing seems to help! I'd recommend stretching and other exercise for prevention so you never have to deal with it!

Hi Heather! Yep, prehab stretching and exercises are the best route to go. These Hip abductor (glute medius) exercises are great for helping to prevent IT band issues.
http://www.youtube.com/watch?v=aVS0JWAkV1U&feature=player_embedded