If you've been running as long as I have, you'll remember a time when all there was to run in was 100% cotton—shorts, T-shirts, oh and lets not forget the tube socks! The term "moisture-wicking" had not yet been created. Oh the lovely memories of shirts that felt like they weighed 5lbs heavier and stretched down to your knees from all the water the shirt retained after a run on a hot summer day. Not to mention the chafed nipples! OUCH!!! Oh and don't forget that your shoes felt a few pounds heavier (each foot) from all the sweat your cotton socks had collected.

The dawn of synthetic performance apparel was a godsend. But, nothing's perfect. Ever had a running shirt that after a season of running could stand on it's own from the reeking odor? PEE-YEW! No matter how many times you wash it, that odor just doesn't go away. There are new detergents that help kill the sports-related odor, but that's just an additional purchase and not a cheap one at that.
I've always read never to buy sports/performance clothing that's not made of synthetic materials such as polyester. So, I was a little skeptical when I came upon thriv—a new line of non-synthetic performance clothing.
Driven by the negative experiences of wearing traditional polyester-based athletic apparel (skin irritation, odor), the Andrews family decided it was time for a new fabric. Al Andrews, former Tulane student–athlete (All SEC '65 & '66) and apparel industry veteran charged his son Todd with finding a solution. He wanted the fabric to include the following properties: moisture wicking, anti–microbial, thermal regulation, UV protection, and comfort—a pretty tall order.
- 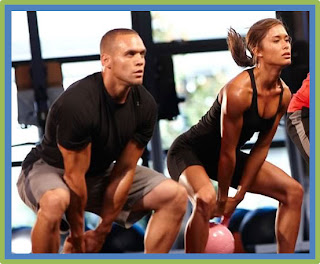 Ultimately, after two years of R&D and many trials, Todd learned that the only fiber that fit his dad's criteria for success was bamboo. Use of bamboo in apparel is not an entirely new concept; however its true potential had never been fully realized. With the help of textile engineers, a lot of passion, and a little luck they developed their own yarn process and fabric finishing on a unique blend of bamboo, organic cotton, and elastane.
Still skeptical, thriv sent me a shirt to submit to some RunnerDude testing. I wasn't sure what to expect and I had a lot of questions. Bamboo? Was it going to be stiff? Breathable? What would happened when RunnerDude (the Super-Sweater) wore it? Would it retain water?
-
Well, I'm happy to announce that it passed RunnerDude's testing. I wore the shirt during an intense workout at the gym one day and (then after a washing) I tested it out on a few rather sweaty runs. In all cases, the shirt worked amazingly well. During my gym workout, the shirt stretched with me and was not binding. It also was breathable and wore great. On the runs, I had similar results. The shirt did become damp (as expected), but it was not saturated. The material was breathable and did allow most of my perspiration to evaporate. The fabric is surprisingly soft. To avoid chafing, I usually either run shirtless or wear a fitted shirt so that the fabric doesn't rub my chest. This shirt was a looser fit so I was a little worried, but I didn't experience any chafing. YEAH!
To test the anti-microbial factors, I let the shirt sit out for 2 days after my last run. YIKES! Um...well, the word "RANK" comes to mind. I washed the shirt using regular laundry detergent and, voilà! The shirt came out smelling like a rose. Okay, it smelled like Tide, but you get the point.
Independent performance testing shows that thriv's unique fabric does equally well if not better in all testing categories—wicking, drying rate, UV-A, and UV-B radiation protection.
-

Thriv performance apparel gets 5 Dudes on RunnerDude's Rating scale. This is a great product and a wonderful, environment-friendly alternative to synthetic petroleum-base performance fabrics. Currently thriv apparel can be purchased at select Sports Authority stores as well as online at SportsAuthoritycom. Give it a try. You'll be pleasantly surprised!
Posted by RunnerDude at Thursday, October 22, 2009

I'll have to give the bamboo fabrics a try-sounds good! I recently went out on a short run in a cotton t shirt because that was all I had that was clean-huge mistake. I had forgotten how awful cotton feels when it gets soaked in sweat!

Interesting... it would be really nice to have a breathable shirt that doesn't stink!!!

Also, I really like the picture you included in this post... I'm thinking that if I could get my hands on one of those pink kettlebells maybe it would help encourage my wife to work out with me!!!

Hi EZEthan! Welcome to the blog! Let me know if you try out some thriv apparel. Really is good stuff! Yep, those kettle bells are killer, even if they're pink! Just did a 300 workout the other day and one of the exercises involved kettle bells. Tough, but good!

Awesome! My shirt is still in the mail. :(
But looking forward to wearing it!

Hey Zoë! Let me know what you think after you try it out!

Thriv sent me a sample as well, and I have to say I agree with you 100%. Awesome shirt and incredibly soft and comfortable material. Looks like they're not quite as pricey as I would have expected either. Good stuff!

Hi Pete! Good to hear you had a similar experience with Thriv. I was surprised too when I went to the Sports Authority site and saw that the prices were pretty reasonable. Definitely a good thing for my wallet.