Looking for a Pasta Alternative? 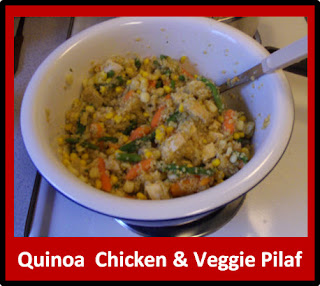 A few weeks ago a running buddy of mine was complaining about being tired of eating so much pasta for fueling her marathon training. She was getting plenty of carbs from other sources like fruits and veggies, but it seemed like every meal involved pasta. Bow tie, penne, macaroni, vermicelli, rotini—doesn't matter the shape, it pretty much all tastes the same. Swapping up sauces can help, but after a certain point, you get PASTA OVERLOAD!!

So, I went on a quest to find a good pasta substitute. The fruits of my labor? Quinoa. Never heard of it? I hadn't either. Actually, Quinoa (pronounced keen-wa) is technically not a true grain. It's the seed of the Chenopodium or Goosefoot plant. It's commonly referred to and used as a grain because of it's similar cooking characteristics. Quinoa grains come in a varitey of colors—ivory, pink, brown, red, black—depending on the variety. (I used an ivory variety for the recipe below.) I had never heard of Quinoa before, but evidently it's been around for thousands of years. The grain can be tracked back to the ancient Inca civilization of South America. They called it the "Mother grain."
-
The National Academy of Sciences says that Quinoa is "one of the best sources of protein in the vegetable kingdom." Why? Well, for starters, its a complete protein grain. It provides all the essential amino acids. Perfect for vegetarians! It also contains no gluten. Perfect for individuals following a wheat-free/gluten-free diet!
-
Sounds really good, but like many really "good-for-you-things" I was braced for something really bland. Wrong! It actually tastes pretty good! It has a nutty texture and flavor. It's filling, but it doesn't give you that stuffed feeling that pasta can leave you with. You can eat Quinoa as a breakfast cereal, add it to soups and/or salads, use it as a side dish, or combine it with other ingredients as a main course! What I like most about Quinoa is that unlike other whole grains, it doesn't take long to cook—only 10-15 minutes on the stovetop. You can even cook it in the microwave! Having a busy family of 5, that's wonderful!

So, I found this cool "new" grain. Now what. Well, I knew what my kids like to eat, so keeping that in mind and keeping time and ease-of-preparation in mind, I created the following recipe. End result? My family wiped it out! 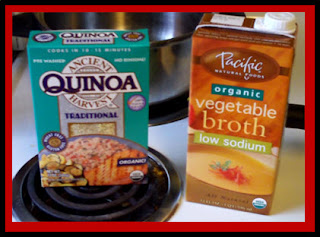 Looks great, thanks! I eat a lot of quinoa. It's a carb I can eat!

I LOVE quinoa! It's hard to find around here though, oddly enough...

Hi Kathleen! That's great! It was a new grain to me! Nice find!

Hi Heather! Luckily one of our mainstream grocery stores- Harris Teeter- carries it. I bet Whole Foods would carry it too.

I will be giving this a try, thanks!

Hi Believe! Awesome! Let me know what you think!

Quinoa is also Gluten Free, which is a huge bonus to us runners who need to carb but literally can't eat all the whole wheat pastas etc out there. Glad to see a "regular" eater like you has found quinoa, it's really pretty good and super versatile!

Hi Laura! Thanks! Yep, great option for people with celiac disease or who just want a gluten-free diet.

I have a feeling that friend was Dena, as we all had that same discussion one day.....Can't wait to try your receipe. Thanks for sharing.

Hi runrgrl2007(Amy)!
Yep! That's our Dena. She just had this look in her eye that said without any words...if I have to eat another piece of pasta, I'll scream! LOL!! Hope you like the recipe!

Looks yummy. I have been trying the gluten free thing, I have realized gluten doesn't work well for me. So having another alternative is great. Thanks. I will definitely try it.

Hey Stacey! Awesome! Let me know how you like it!

This sounds good, sometimes it's just to much pasta.

which section of the grocery store do you find quinoa? I did not find it with the pasta or anywhere else I looked.
If I find it I will be trying your recipe, it sounds delicious!

Hi Lorenda! I found it in the section with the rice in my grocery store. Check with customer service if you can't find it. A lot of times, they'll special order a product if you ask.