Don't Crunch It, Plank It!

When you say "core exercises", more than likely doing crunches comes to mind. Crunches are fine and they'll definitely help you get that "beach-buff" body with the nice six-pack, but beyond the aesthetic benefits there's not much more that crunches provides. When you do crunches, you actually workout your hip flexors more than your abs. If you're a runner, you're already giving your hip flexors plenty of attention and sometimes doing a ton of crunches on top of that can be overkill and even lead to injury.

So what's a runner to do? Well, there are plenty of core exercises to choose from that are much more functional and benefitial to runners. First of all, when you think of "core" try to think beyond your abs. There are a lot more muscles than just the abdominals that make up the core. Core muscles consist of the muscles that run along the trunk and torso and generally include the following:
Rectus Abdominis—the "six-pack" muscles that everyone strives for
Erector Spinae—three muscles that run from your neck to your lower back
Multifidus—found beneath the erector spinae
External Obliques—positioned on the side and front of the abdomen
Internal Obliques—found beneath the external obliques, running in the opposite direction
Transverse Abdominis—muscles that protect your spine and provide stability; found beneath the obliques
Hip Flexors—a group of muscles (psoas major, illiacus, rectus femoris, pectineus, and sartorius) found in front of the pelvis and upper thigh
The problem with a crunch is that it's only one movement—crunching forward. Think about it. How many times during the day do your crunch like that? Now think about how many times you twist up, down, sideways? Your core exercises need to include more of a full-range of motion. Incorporating the elements of stability and balance into you core exercises is also great. Doing core exercises on a stability ball, medicine ball, core-board, or bosu helps you recruit more than just the targeted muscle group. This "extra recruitment" helps develop a stronger core as well as better balance and stability.
One of the best core exercises a runner can do is so simple, yet extremely effective—The Plank. To do a plank, lay face down on the floor. Put your forearms on the floor so that your elbows are aligned directly under your shoulders. Your forearm and upper arms should be making a 90°angle. Your legs should be stretched out behind you and you should be resting on your toes like you're doing a pushup. Engage your abdominal muscles to help you hold your body in a straight "plank" position. Your back should not be arched and your butt should not be drooping or stuck up in the air. Your body should be making an even diagonal line that's moving slightly up from your toes to your shoulders. These looks simple but they can be tough. Try holding the plank in good form for 30 seconds. See if you can work up to a full minute. Last check I could hold a basic plank for 4:02 minutes. TOUGH!
Once you've mastered the plank try some variations such as the basic plank with one leg lifted, a side plank, or a side plank with a raised leg. When you feel confident, try upping the difficulty even more by putting your feet and/or hands on a bocu, stability ball, and/or medicine balls. Another good plank workout is to alternate plank positions, moving from one to another (never letting your butt hit the ground) for 5 minutes. Mastered that? See if you can go for 10 minutes! 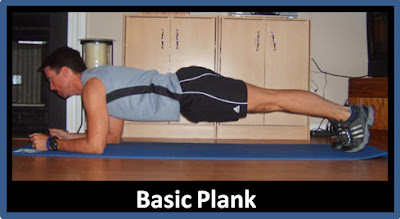 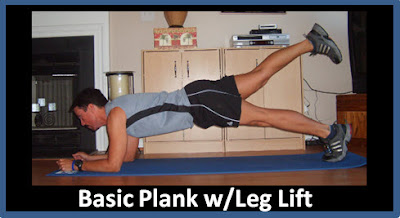 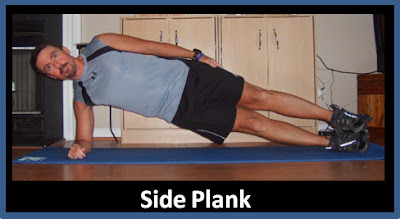 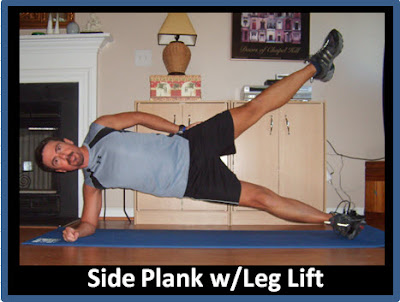 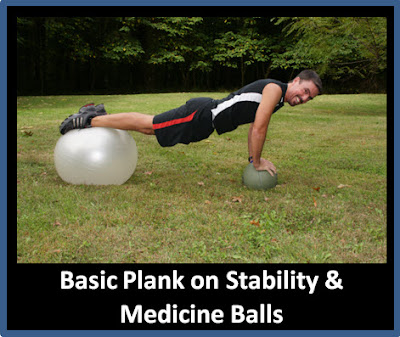 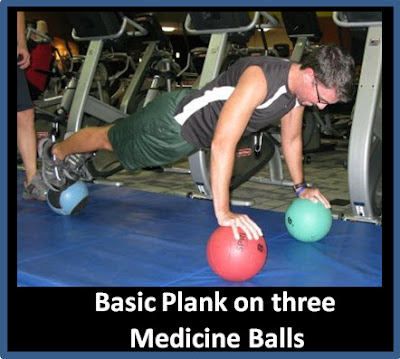 For a complete core workout from RunnerDude using a medicine ball, [click here].
Posted by RunnerDude at Thursday, October 08, 2009

I definitely can use some work in this area! Thanks for the suggestions.

I do Plank a few times a week. Love it. I have never down it on the ball and med ball... or 3 med balls for that matter. you are hard core.

Uhhh...wow! I'm going to give it a shot but will have to work-up to the medicine ball technique.

I have such a love/hate relationship with the plank. I hate doing them, and I love when I'm done.

I have a slight variation.

Have a Marine Corps Drill Instructor yell at you while you do the plank. So much more fun... :)

Hey Janice! Welcome! Yep, it took a while to get the medicine ball plank down. After holding the plank for 30 seconds, my friend had me do 10 pushups while still on the balls!

Hi Molly! Running's like that too sometimes. Especially on rainy days! LOL!

Hey The Running Bob! You'll get there!

Hey Noah! Drop and give me a 2-minute plank. NOW! LOL!! Funny, right after I got the email alert of your comment. I got an email from the Marine Corps Marathon. LOL!

Plank on a stability ball and medicine ball?? Oh dear! I definitely shouldn't try that one in public because it would be too hilarious. :) BUT, I will try that at home because it looks killer. Thanks for the tips, 'Dude!

I really found that doing some form of training really helps because that next workout, I feel so much stronger. My posture becomes erect and overall, there's a positive impact.

I found this blog randomly and I'm lovin it man. I added you to my Blogroll. Would you be willing to return the favour? Either way, I’ll keep subscribing to your blog and read in on your coming posts :)

Hey Zoë! Oh I bet you're stronger than you think!!

Hi Nehal! Welcome to the blog and thanks for the kind words and feedback! Been checking out your blog. Great stuff! Added it to my blog roll too!

'Dude - Another good post. You're right in that I associate abs work with crunches. They're easy to do, and what I grew-up with. Interesting point that these do more work for the hip flexors which already get plenty of attention. I'll need to do more planks - then graduate to some of your more challenging options! Thanks again!

thanks for a great post... my first plank stank but I'll get stronger with these exercises. Cheers Paul

Hey Paul! Amazing how something that looks so simple can be so hard. I was the same way. Was really hard to hold it for any lenght of time. But keep at it! You're core will get stronger and you'll be an ace at it in no time!