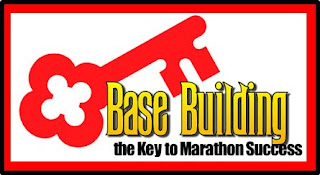 Now's the best time to start preparing for your fall marathon. What's that sound? Is it the sound of jaws dropping? Yep, now is a great time to start preparing for your fall marathon. Notice I said "start preparing" not "start training." I've mentioned it in previous posts that base building is key to a successful marathon. Many a bad marathon experience can be traced back to lack of building a solid base. So before you start your marathon training in May, June, or July, take the next 3 months to work on building a strong base.
-
Okay, I hear the mumbling. You're wanting more specifics. The "Whys?" Well there are a couple of "Whys." Fist of all, it's during this time that you're conditioning your body to being on the road or the trail. Just because you can run a 10-miler at race pace once doesn't mean that your body has adapted to running at that distance or pace. In fact it takes 4-6 weeks of running that 10-miler at that pace for your body to adapt to that distance at that pace. Giving your body this time to adapt as you build your mileage means you're allowing your body to gradually get acclimated to the added stress which will help prevent injury. This doesn't mean that you have to run that same 10-miler for 4-6 weeks straight. What it means is that 4-6 weeks down the road (when you may be running a 18-miler) your body has actually adapted to the 10 miles and now it's in the process of adapting to the higher miles.

Too much too soon is often the cause of many running-related injuries. A good rule of thumb for increasing weekly mileage is to increase it by no more than 10% per week (adding the extra mileage to the longest run first and shortest run last).

Secondly, base building helps your body to actually increase the amount of oxygen in your blood stream which in turn increases the number of mitochondria and capillaries you have. So why is that important? Well, everybody knows that it's important for runners to fuel themselves with carbs. In the body something called glycolysis happens which is the breakdown of carbohydrates (either glycogen that's stored in the muscles or glucose delivered in the blood). The end product of this process is something called pyruvate.

Pyruvate is what's used to resynthesize ATP (the real energy source of the body). If you've depleted your oxygen levels in the blood (or you just don't have good oxygen levels to begin with), your body will convert the pyruvate to lactate. If you haven't incorporated lactate threshold training into your plan and this occurs, then you might experience a burning sensation in the muscles and begin to slow down. Trained runners, however, can actually use the lactate as an energy source, but even that will only last for a short time.

The best method for sustained energy is for the pyruvate to be shuttled into the mitochondria where it will be converted into Acetyl-CoA which then will go through a series of reactions eventually resynthesizing ATP creating energy. This is known as the oxidative system (more specifically the Krebs Cycle). The body can also take fat through the Krebs cycle to produce energy. Actually fat makes a great fuel source because 1 gram of fat produces 9Kcals and 1 gram of carbs only produces 4Kcals. In either case, oxygen is the key factor.

Sounds really complicated, huh? Well, basically if you've fueled well with complex carbs and have good levels of oxygen in your blood, then you're gonna get that energy-making stuff where it needs to go to make more energy so you can keep going. One good way to make sure you have good oxygen levels is by increasing the number of capillaries you have. You do that simply by running more. Your body will take care of the rest.

Have you ever seen a sprinter that's a great marathoner? Probably not. A big part of the reason you don't see that crossover is because sprinters have a lot more Type 2 (force production) muscle. But another reason, is that they use a different energy system. Their bodies aren't concerned with long-term energy needs. They use the phosphagen system which provides quick energy.

So why do distance runners benefit from speed work? Great question. Well speed work helps a distance runner push their lactate threshold levels higher. It helps a distance runner's body learn to deal with lactate when it's produced. The body will more likely know what to do with it and convert it to energy instead of just making you feel sluggish and fatigued. It also just helps the body know what it feels like when/if you need to kick it up a notch during a race. So be sure to add speed work (intervals, hill work, fartleks, etc.) into your "real" training this summer.
-
Take advantage of these next few months before your "real" marathon training begins to prepare your body for the hard work ahead by working on that base. You'll be glad you did.
Posted by RunnerDude at Monday, February 15, 2010

This is so true. over the past few years, I've found that the KEY isn't pushing yourself 100% all of the time, but building upon a solid foundation that actually shows results. Good post!

I agree with this. The body handles the "real training" so much better with a solid base.

Hi Johann! Are you training for any upcoming races?

Thank you! I am one of those people that follow the training schedules but like reasons behind them, want someone to answer the question why for me.

Great blog! I'm PREPARING to train for California International Marathon now. Strength, interval, tempo and 10 mile runs for now and then train starting in July for the December event. I agree with Nicki's comment, I like to know why and how something work so I can believe in it before I apply it.