Kick That Carry-Out to the Curb! 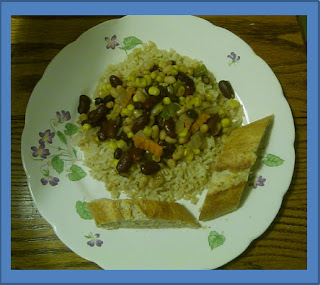 Ever have one of those nights when your tired, you need to make dinner and you realize you haven't done the grocery shopping yet? Okay, okay, put your hands down. Your first reaction (or mine anyway) is to call Papa John's Pizza! or Chinese! But I promised myself to try and cook more at home to help save money and to ensure we as a family are eating better. We usually do pretty well. We're trying to avoid those "slips" when it's just easier to pick something up.

So, determined and on a mission, I opened the pantry door and looking at the odd selection of cans, boxes and mainly empty space, I started trying to piece together a meal. Well, I had enough slow-cook long grain brown rice to feed half the family, but I moved some stuff and discovered a box of quick-cook brown rice that would feed the rest of the family. So what if one takes 5 minutes and the other takes 45-minutes to cook. That was the base of the meal. What next? Hmm, a can of black beans (expiration date? shew...still good.) Oooo, a can of navy beans. Is that what I think it is? Holy-moly, it is! A can of kidney beans. Everything is brown. I'm not a fan of mono-chromatic meals. Needs some color. Ahhhh a can of corn. Tada!
Now to check the fridge....need something to add some flavor and a little more color. Well, there you go, that onion-half left over from dinner 2 days ago. Cool! a bag with 10 carrot chips in it! And a half of a green pepper that's not mushy!
So, the chopped onions, green pepper, and carrots got sauteed with some olive oil before dumping in the drained kidney, black, navy beans, and corn. The house even smelled like home-cookin'! I think it's the onions that do that. A dash of chili powder, a pinch of red pepper, some seasoning salt to taste. Yum! All I needed now was some good crusty whole-grain bread. So while the one batch of rice was still cooking, my 18-year old son zipped to the store for some bread. Okay, so we did pick up one thing, but it was healthy.
The only thing that would have made the meal even better would have been if each member of the family had taken a Beano pill before eating. Other than that, I'm thinking maybe I'll do this every Thursday night. I'll call it "Pot Luck Thursday" cause we'll be lucky (and grateful) for whatever goes in that pot.
Sitting, here now, feeling full (and a little gassy), I've realized that this meal is actually pretty good for runners. The meal is full of protein, fiber, complex carbs as well as being full of vitamins and minerals. And believe it or not, it looked and tasted good! If you wanted a little more protein, you could chop up some leftover grilled chicken or saute some hamburger burger. Or, instead of rice, use Quinoa. Chickpeas would also work well in this mixture. 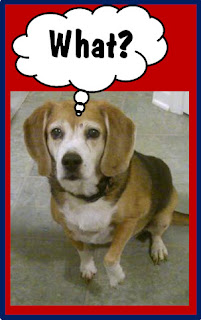 So, the next time you're faced with pick-up or an interesting hodgepodge meal, try the hodgepodge. You might be pleasantly surprised. (Side note: don't feed the dog the leftovers (or these leftovers anyways). You'll regret that decision. Just take my word for it.)
Posted by RunnerDude at Thursday, February 04, 2010

My wife likes planning meals and recipes. I like creating. She's the technician, I'm the artist.

I have done exactly what you did many times. What I've found is that any bean and any rice combined makes a pretty good meal. Through in a little salsa or veggies and - Wala - dinner!

Well done. I look forward to reading about your next creation!

We do this once a month. We call it "You Bought It, You Eat It" week.

my husband is king of this. one night he browned some ground turkey, roasted some red new potatoes and boiled some broccoli. all went in a bowl together. we've had that five times since...on purpose! it's now one of my favorite meals!

Nice hodge podge. I always plan my meals and have everything in the house not b/c I'm cool but because I have no confidence to create my own thing. Nice going!

I do the same thing with bowls in the frig...I stand in front of the open door and think about what kind of somewhat healthy yummy meal can I make?...I say I'm going "bowling" for dinner.

Thanks Joe! I'll keep you posted on my next creation! LOL!

Thanks Joe! I'll keep you posted on my next creation! LOL!

Hey Acey! That sounds pretty good! I'll have to try your husband's concoction!

Hey Shutupandrun! Experiment one day. See what you come up with!

Hey Kay! "Bowling for Dinner!" I love it! We may just adopt that phrase in our household!

I hear ya on the hodgepodge. It can be very fun. I have not had carry out of any kind since last year. lol. Hey, great post.

Thanks Kenley! Wow, no takeout in a year! You da man!

I hate cooking. period. I have been doing better though. I live in the take out capitol of the world (NYC). Even McDonald's delivers, but I don't eat that, you get the picture.

I did though make the beans and rice that you did and had it a few times for lunch this week. YUM! (and yes, pfft! excuse my gas).

Hey Regina! McDonalds delivers?!! LOL! Wow! I'm honored you made my concoction. Glad you enjoyed it!