Often Overlooked but Key to Marathon Success: The Base 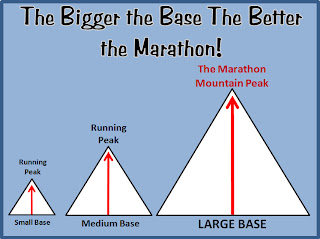 "Base." Doesn't sound glamorous, does it? Isn't snazzy sounding. Isn't flashy. But, man is it important. One of the biggest mistakes new marathoners make is overlooking the base mileage needed before beginning any kind of marathon training.

It is a little misleading. If you google "marathon training plans," you'll find a hundred different links to a hundred different training plans. One thing that most of these plans will have in common is the duration. Most will be within a 16 to 20 week range. Here lies the problem. Most training plans start with the assumption that the runner has a solid running base. Some plans (especially ones that are 20+ weeks) may include a little base building (2-4 weeks), but for the most part, training plans have the runner start off pretty quickly building that long run, increasing the weekly mileage, and eventually adding in speedwork and tempo runs. And...there's nothing wrong with that. The plans are solid. It's the runner's understanding of the importance of the base building before the plans kick-in that's often lacking.
Think about it. Without months of conditioning and practice, would you just go out and climb Mt. Everest? Probably not. The importance of building a solid base cannot be expressed enough. It's during this time that you're conditioning your body to being on the road. Just because you can run a 10-miler at race pace once doesn't mean that your body has adapted to running at that pace. It takes about 6 weeks of running that 10-miler at that pace for your body to adapt. Giving your body this time to adapt as you build your mileage means you're allowing your body to gradually get use the added stress which will help prevent injury. This doesn't mean that you have to run that same 10-miler for 6 weeks straight. What it means is that six weeks down the road, when you may be running a 18-miler, your body has actually adapted to the 10 miles and now it's in the process of adapting to the higher miles.
Too much too soon is often the cause of many running-related injuries. A good rule of thumb for increasing weekly mileage is to increase it by no more than 10% per week (adding the extra mileage to the longest run first and shortest run last).
RRCA (Road Runners Club of America) recommends that the base-building phase be about 18-25 weeks. Remember that the bulk of this phase begins before you start that traditional 16 or 18 week marathon training plan. If you're a seasoned runner and marathoner, you probably already have the recommended base and so you can go right into your 16-week plan. But for the novice marathoners, they need to be prepared to put in some miles of base-building before the focused training begins.
Listed below are RRCA's base-building recommendations for the following groups of marathoners:
• Beginning Marathoner: Six months of running experience and a base of 20 miles per week
• Recreational Marathoner: Experienced runner, may have run one or more marathons; has a base of 25-30 miles per week
• Intermediate Marathoner: Experienced runner, may have run one or more marathons; has a base of 30-40 miles per week
• Advanced Marathoner: Experienced road racer with previous marathon experience; has a base of 50 miles per week
The main thing to keep in mind is that the more solid your base the better prepared you're going be (physically and mentally) when you go into your more focused marathon training. If you're thinking about a spring '10 marathon, now's the time to be building that base!
Posted by RunnerDude at Friday, September 25, 2009

Or you could do what I did, and just run like crazy and hope for the best. Then, when you overdo it, you're forced to take it easy. Sort of an upside-down triangle, with the base on top.

Hey, some of us gotta learn the hard way. Now, on to investigate this whole "don't touch a hot stove" thing...

(statement of the obvious: take runnerdude's advice, not mine)

I just love your blog! Can I repost this entry in my blog? Thanks bunches!

Signed,
a novice runner who will run her first marathon in April 2010, following Higdon's plan.

Hey Melissa! Thanks so much for your support of the blog! Reposting on your blog would be awesome. Thanks!! Best of luck on your spring marathon. Which one are you running? Higdon has great plans. You'll definitely be ready.

Thanks for the advise. I'm running my first marathon in Feb--26.2 Run With Donna for breast cancer in Jax, FL. I appreciate all the help...using the Galloway method.

It is all about the base. Every winter I try to log 100 mile weeks of slow mountain running and then use that base for the whole summer racing season. Without a base you can weed out the Contenders from the Pretenders really quick. It just comes down to running a ton of miles in the off season. That is the key to progress.

Hey Anonymous! Best wishes on your first marathon! I've not used the Galloway Method, but I know people you have and they've have great marathons using the plan!

This is sooooo true. I have been working to get my base up to the triangle on the right :)