What Exactly is Easy? Comfortable? Hard? 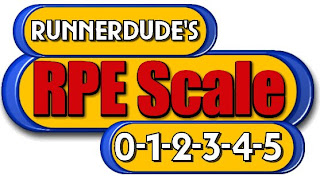 If you read a lot of running training plans, you'll soon become very familiar with the phrases "easy pace", "comfortable pace" and "hard pace." Or you'll read about "easy days" and "hard days." Those are really broad vague terms and the authors of those books aren't just using those terms to avoid having to pin themselves to specifics. The reason those vague terms are used is because every runner is different. We come short, tall, thin, overweight, slow, moderate, and speedy. There is no "one size fits all" in running.

Given all of that, it still doesn't help too much when a plan says run 5 miles at an easy pace. Is that 8-minute miles? 9? 10? The fact is, any one of those could be the correct answer. The best way to interpret "easy" and "hard" is to use something called the Rate of Perceived Exertion scale or the RPE scale. The original RPE scale (sometimes called the Borg Scale) used a rating scale of 6-20 (not sure what happened to 1-5). Basically level six was at a resting rate, level 7 was very, very light, 13 was somewhat hard, 15 hard, 19 very, very hard, and 20 maximum effort.

A more recent version of the RPE scale uses a 0-10 rating system. This one is easier for my brain to handle and when you're running, you really don't won't to be bothered with having to remember an odd rating scale. This newer version goes as follows:

Rate of Perceived Exertion Scale
0—NOTHING AT ALL (at rest)
1—VERY LIGHT
2—FAIRLY LIGHT
3—MODERATE
4—SOMEWHAT HARD
5—HARD
6
7—VERY HARD
8
9
10—VERY, VERY HARD (MAXIMAL)
I like to modify this newer scale even further to the following 0-5-point scale.
RunnerDude's RPE Scale
Level 0— an easy warm-up walk around the parking lot before or after your run
Level 1—that easy 1-mile jog you do as a warm-up or cool-down at the beginning or end of a run
Level 2—a run at conversational pace; a great pace for long runs; about 65-75% of your max heart rate
Level 3—a challenging pace; typical pace for tempo runs, fartleks, or hill work; about 75-85% of your max heart rate
Level 4—the pace of longer interval distances (800m-1600m repeats); about 85-90% max heart rate
Level 5—your maximum speed; this is the speed of shorter intervals (200m-600m); about 90-95% max heat rate; rest intervals of at least twice the distance of the running interval should be included between each effort intervals
So basically, "Easy" and "Hard" refer to effort. Keep in mind that this doesn't always correlate to distance. You can have an easy long run or a hard long run. You could also have an easy 2-miler or a hard 2-miler. It all depends on whether you're running at a Level 2 or a Level 4 effort level.
Keep in mind (especially if you run with a group) that each runner is going to have different interpretations of effort. A Level 3 run could be a 7:30-pace tempo run for one runner and an 8:30-pace tempo run for another runner. Both paces could be a challenging effort for each runner for his/her experience/ability level. Not to say you shouldn't run out of your comfort level from time to time. (One of the best ways to get faster is to run with a faster runner.) But, on the other hand don't get discouraged if you're about to die on someone else's "easy run." Kind of like "one man's junk is another man's treasure...."one runner's easy run is another runner's hard run."
Posted by RunnerDude at Friday, February 12, 2010

ah, the subjectivity of it all. i searched our med libraries to find out what happened to 1-5. no luck. now i am on a mission! could be fun. thanks, and have a great weekend!

Hey Gene! Let me know if you find the answer!

Great post! My tempo run and long run groups are getting pretty big and we have been breaking up the groups according to this type of scale. I like the 0-5.