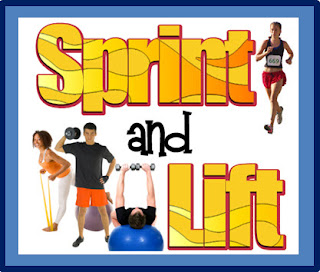 For year and years, the thought was that long slow runs were the best way to burn calories. Well, long slow runs will burn calories but there’s something else that happens during long slow runs. Something called cortisol is released. Cortisol actually can eat way at your muscle tissue. This can slow your metabolism causing you to burn fewer calories, and you can actually start to gain weight.

Have you ever heard a fellow runner say, "I run and run, but I can’t lose weight"? I bet if you dug deeper into their running routine, they’re probably running the same mileage at the same low-intensity pace week after week. Now while this is good aerobic exercise, it could be doing harm to their metabolism and muscle mass.

So what’s a person to do? The solution is really easy and some of you may already be doing it. Just mix up your routine with some speed work and some resistance training.

Speed work doesn’t have to be on a track. You can do speed work by throwing in something called fartleks into a regular run. A fartlek (I know you’re snickering) is nothing more than speeding up and slowing back down to the original pace over and over during a run. Fartleks can be timed (run at regular pace for 2mins and run a fartlek for 30 seconds or a minute or whatever time increments you like). Fartleks can be measured by distance (run at regular pace for 1 mile and run a fartlek for ¼ mile or whatever distance increments you like). Just remember that after the fartlek to pull back to the pre-fartlek pace. Repeat this process several times during a run and you’ve had a good speed workout. Be sure that your fartlek pace is around your 5K race pace. You can also do a more formal speed work by doing interval workouts at a track such a 6 x 400m). Hill workouts and tempo runs are also good to ramp up the intensity. Research has shown that short intense speed workouts burn just as many (if not more) calories as a long slow run and you don’t get the cortisol release.

Now, I know many of you still have ruffled feathers over the non-running activity thing, but be assured; I’m not talking about Arnold-building, bicep-bulging, scary-looking, meathead-with-no-neck kinds of workouts. Arnold and those other big boys used something called hypertrophy training. That’s training designed to create those big bulgy muscles. Runners can use something called endurance training.

Endurance training uses lower weight and higher reps. For this type of exercise, you’ll be using less than or equal to 67% of your one rep max. Basically that’s a weight that you can handle for about 12-15 reps. Or, you don’t even have to use any weight other than your body weight. Exercises like squats, lunges, and deadlifts are great resistance training exercises for runners (with or without weights). Upper body exercises are just as important. Ever been on a long run and your arms get fatigued? If you’ve increase their muscular endurance along with your legs, you’re going to delay fatigue much longer than just focusing on the legs. Core exercises are great too and are extremely important in maintaining proper running form which will help fight off fatigue.

Another key to endurance weight training is that there’s very little rest time in between sets (30 seconds). So give it a try. Lighter weights, higher reps, less rest time in between sets. Now endurance resistance training may not officially be an aerobic activity, but I guarantee that it will get your heart rate up and you breathing hard. Give it a try and you’ll see.

Now as an endurance runner, you’re going to do some long slow runs. In fact you’re going to be doing a lot of them, especially if you’re training for a marathon or ultra marathon. So what gives? Well that speedwork and resistance training also have other added benefits. Sprinting and other forms of speed work, causes the body to release human growth hormone factor which has been called nature’s fountain of youth. It helps your body build muscle tissue as well as repair muscle tissue quicker. Resistance training does a similar thing, it also helps to release human growth hormone factor (more in females) as well as testosterone (more in males). Both of these help build and repair muscle tissue. So, mixing-up your weekly routine with some speedwork and some resistance training helps to counteract the bad effects of cortisol released during a long slow run. Not only that, it also makes your weekly workouts much more interesting!
Posted by RunnerDude at Friday, February 19, 2010

Great article RD! You always bring some much needed insights into the running that we do. Question: does yoga with all of its lunges, pushups, etc count as resistance training?

Thanks for posting this! I needed to be reminded to mix it up :)

Hi ShutUpandRun! I definitely think yoga would contribute. The more resistance you add the more of an intense workout you'll have so adding some weight to the lunges and such may help boost more human growth hormone factor and/or testosterone, but I've done a little yoga and I'm definitely burning something or producing something, cause it ain't easy! :-)

Hi BarefootAngieB! Thanks! I definitely have to remind myself as well. It's all to easy to stick with the same-o-same-o.

It does not matter how many blogs I follow, I can always count on you to talk about something I need to hear.

Thanks RunnerDude. BTW, I had a pretty cool run this morning. http://www.mooreonrunning.com/2010/02/mission.html

Hi Noah! Thanks man. Just read your blog posting. What an adventure you and your son will never forget! (Blog readers, be sure to check out Noah's posting [see his comment for the URL])

I definitely need to add these things into my schedule. Unfortunately, when I run out of time or energy, they are the first to go, yet they would probably be better for my training in the long-run (no pun intended).

Thanks for that timely reminder.

I love your blog. I've been tracking calories and accounting for runs, but after my weekend long runs I wasn't losing weight-- in fact I was gaining a pound or two. Thus the reason I searched and found your blog. I just started resistance training but will finally add intervals starting tomorrow. I appreciate your insight!

Great post! I've been stressing about not losing weight when my runs are getting longer and longer. I do a tempo run once a week and non-running cardio another day a week but maybe I should try more intervals? Thanks for all the info.