Runner of the Week: Jill 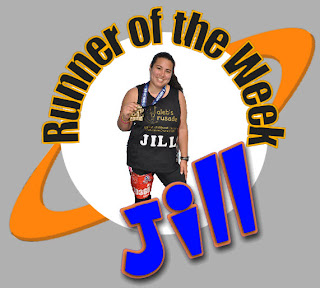 Last March, I shared with you John's story and his amazing journey to a healthier life-style and a life of fitness and running. John is an amazing man and when he suggested I share the story of a friend of his (Jill), I knew it would also be an inspiration.

Jill definitely is just that. After a year of personal struggles and loss, Jill has prevailed and become an even stronger young lady for herself and her family. Read on to learn more about Jill and her journey.

When people ask me why I run, my first response is usually “blood pressure”. Even though I am overweight and need to lose several more pounds, it isn't my first thought or concern. My second response is usually the newly adopted motto of our team in training group “I run because I can. I run because they can’t” and then I follow up with some brief overview of Caleb’s Crusade, the non profit organization that put together the marathon training program in which I participated. This non-profit’s mission is to help families affected by childhood cancer.

The real reason I started running is because it’s not complicated. All you need is a good pair of running shoes and motivation to walk out the door. I now know that there is a lot more to it, but still, running is relatively simple. And it is the only “sport” I have ever been able to stick with.

I am NOT an athlete, nor am I a particularly fit personality. I am competitive, but not a competitor. I have had times when I wanted to get healthy and lose weight trying diets or gym memberships but nothing really stuck. I feel lost in the gym with all the choices and bored out of my mind in circuit training centers like Curves. I love to eat and will try just about anything (fresh, cooked, raw, steamed, fried, green, red or white) as long as its prepared well and seasoned right, I love it all.

But, I have been increasingly gaining weight for several years (on average about 5 lbs a year), capping out at around 185-190lbs at 5’ 4”. When I was diagnosed with high blood pressure, I knew that I needed to make some changes.

Early last year (2010) something really changed for me. I started to get embarrassed about the way I was looking and feeling. I went for a walk with a coworker at lunch one day. When I came back from what ended up being about a 30-minute walk, my face was so red, I looked like a tomato. Yes a tomato. It took a better part of the afternoon for my color to return to normal.

I joined a fitness challenge at work and started going to the gym everyday (treadmill and elliptical machines, nothing too complicated). And I set a new goal for the year--Work on working out, don’t worry about diet, just worry about developing a work out routine and stick with it. I was up to jogging (inside and out) about 2 ½ miles a day four or five days a week when a friend convinced me to run in a local 5k. She convinced me that having short term goals, like signing up for a run, would help me stay motivated to keep working out. I had followed her husband's (John) own success story of going from an unhealthy lifestyle to a healthy one, so it wasn't hard to buy what she was saying. (Great for John but unfortunately for me, he made it look a whole lot easier than it would turn out to be). I hung tight though and did in fact cross that 5K finish line on April Fools Day with a time of 35:13.

Later that month I was invited to a running group meeting. Little did I know, this group was working to raise awareness for a new non-profit organization (Caleb’s Crusade) in an effort to raise money to support families affected by childhood cancer. The group would be training as a team for the DISNEY MARATHON …. Wait…. What?... Train for a what? I walked away from this meeting thinking they were CRAZY. I was touched by their story and moved by the dedication of the coaches and volunteers involved, but REALLY a marathon. Yeah right!

I was signed up the next day. I’m not exactly sure what attracted me more, Caleb’s Story, access to professional coaches, or the closeness of the group. You could tell they were good people and I liked them right away. They were training for the full, the half and even had walking coaches for people who wanted to walk the entire race. So I had options. But, was I really going to do this?

We had our first group training run on May 8th. I talked to the coaches and decided very quickly that I wanted to set my goal high, again competitive but not a competitor. I wanted to accomplish something great, but I didn’t feel the need to be first in line. After all, if they were telling me it was possible for me to run a marathon, who was I to tell them they were wrong. So I signed up for the full marathon. Was I really doing this?

Training went well through June. We started off pretty easy and the team was really great. July was a different story. It was hot! Training two nights a week and doing one long run early on Saturday's to beat the heat, or so they keep saying, but it was HOT!

In August I ended up with a strained hip flexor from all the training. Then I received devastating news from my family. My sister-in-law’s breast cancer spread to her cerebral fluid and she was given just a few months to live (by this time she had been fighting off breast cancer since giving birth to her youngest daughter two years prior). 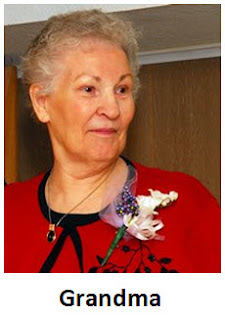 A few months later in October I received more devastating news. My grandmother passed away. This was a great loss for me. One that has changed me forever. A life without her is a sadder place to be. I will miss her more than I can even put into words. With this news, I went out of town to be with my family and ended up not training for another two weeks. I considered putting off the marathon. With the hip flexor injury and the break in training I was worried about being too far behind to catch up. I didn’t want to push it and get hurt even more. I was also emotionally drained, but I wanted to keep going. At the recommendation of my coach and my run buddy, we modified my training to a definite run/walk goal and continued to move forward.

My life was getting a little overwhelming (husband, two teenage kids, work, training, recent loss of my grandmother, my sister-n-law’s illness, and studying for my masters degree). Something had to give. I decided to put off school for the semester and re-prioritize my life.

Then my sister-in-law took a turn for the worse and I took leave from work. I was able to stick with the training program to an extent while in Texas, but I was definitely getting worried about meeting our training goals and being ready for the marathon. My run partner and I adopted the Galloway ½-mile run to 1-minute walk training program for the marathon run and decided to use this method in all of our training runs from then on. Everyone assured me I’d still “finish” the race. 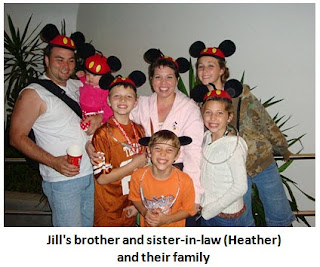 Sadly, in November, my sister-in-law (Healther) passed away from breast cancer at the age of 33, leaving behind my brother and five children ages 2½ to 16 years. This loss affected me in a way I don’t think I will ever truly be able to verbalize. It gave me an appreciation for life and motivated me, more than I can explain, to continue with this training goal. I needed to make a difference in the way I was living my life. Heather fought every day for 2½ years for the opportunity to spend another day with my brother and her children. The least I could do is appreciate what a gift good health really is.

Three weeks after taking leave from work, I was back home and back on my training program with the group. 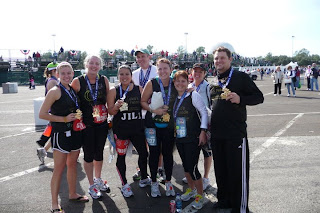 2011 has also started with a lot of gains. On January 8th, I watched as several members of our training group crossed the 13 mile mark of their half-marathon race. They were definitely going to finish! And a couple of them, crazy enough, would be running with me the next day. I was scared but so proud of the work they had put in and very proud to be standing on the sidelines to support our Caleb’s Crusaders team.

The next day on January 9th, I crossed the full-marathon finish line. I never gave up even though I wanted to after hitting “the wall” at mile 19. I honestly didn’t think I would be able to take one step further and then (with the support of my team)… I did. Chip time: 6:25:02. 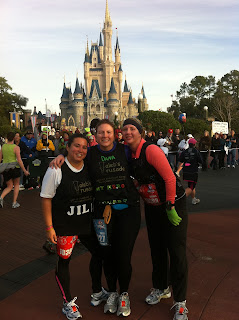 Collective accomplishments so far for the year 2011:


“I run because I can. I run because they can’t” a motto that I am truly starting to believe. So I guess I could say that I am hooked. I found motivation through personal loss, friendship and success. Equipped with a good pair of running shoes, the rest is easy, right?
Posted by RunnerDude at Saturday, January 22, 2011

Jill, you're an inspiration!

hey hey, congrats for being nominated as one of the "Best Running Blogs 2011" hope to read many more of your fantastic running stories. sending you greetings from Malaysia...

Very inspiring story! I love the motto. During a race or run when things get tough I remind myself how lucky I am that I can even put one foot in front of the other.

Not only are you inspirational, but so down to earth. Great motivating read!