Training Adaptation: Be Patient and Give It Some Time 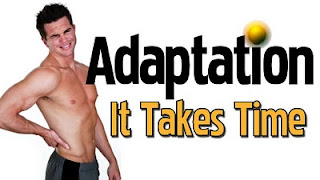 Yesterday, I was with my family in the good ole minivan as I pulled into the drive-up ATM at the bank. I needed to deposit a check and withdraw some cash. Sounds simple, huh? I'm in the middle of the transaction when I hear this voice yelling something. It continued and then I realized it was directed at me. I glanced down into the side mirror and was startled to find a red-faced irate woman's reflection staring back at me. She was waving her arms and yelling, "You're not supposed to take that long at the ATM machine!!"

Well, as you all know, when you're at the ATM, you're kind of at the mercy of the machine. This one happens to be rather slow. I had everything ready, before I pulled up to the machine. I wasn't wasting time filling out deposit slips or counting money. I was going as fast as the teller prompts would let me go. Yet this lady was convinced I should be moving faster.

A news article that I had read a few years ago popped into my head which gave me cause to worry. The article was about a man who was shot while sitting in his car in a fast food drive-thru. Who shot him? The person in the car behind him. Why? Because he wasn't moving fast enough. So, as soon as the machine spit out my money, I gave my wife and the three kids whiplash as I burned rubber out of the parking lot.

Sometimes newcomers to fitness and running can be a bit like that red-faced irate woman in the car behind be at the ATM. They think things should be happening faster and get mad when they're not. I guess a lot can be blamed on this fast-paced, give-it-to-me-now, immediate satisfaction world we live in. I love watching Biggest Loser, but I think it's played a part too. While the show has definitely motivated thousands to start getting fit, I can't help but wonder how many begin on their own personal Biggest Loser journey only to get discouraged because they don't see the same results as the contestants on campus. They forget the fact that these people are working out 24-7, seven days a week, in a state-of-the-art facility for 4 months or more.

There's actually some science behind why many don't see the results they want to see as quickly as they want to see them. It's called training adaptation and it takes time. Whether you're beginning a new running or resistance training program, you enter it with a certain level of fitness. Then when you begin the new exercise, your muscles become taxed/stressed because you're asking more of them. When you work out you actually cause tiny tears in the muscle tissue. Then afterward your body quickly begins to repair those tiny tears and it's this process that builds stronger muscle.  Problem is this takes time.
Remember that beginning level of fitness? Well, when you add new exercise to your program, your body's fitness level will actually decline.
This dip is called the gain threshold. Hold on, there's good news. If you keep at it (giving yourself enough rest in between workouts), you'll eventually pull out of that threshold and end up with a higher level of fitness than when you started. But you have to be careful. If you workout too hard and don't give yourself enough rest in between workouts, then you'll stay in the bottom of that threshold and end up weaker than when you started. This is referred to as over-training. Rest is equally important in training as the actual workout.

Over-training isn't usually the problem with new runners. Instead, new runners will often give up before they see that the gains in muscular and aerobic endurance as they pull out of that threshold. Running with others, such as in a beginning running group, can really help increase a runner's sticktoitness. The support of others can do wonders in helping you hang in there and make it through that first month as your body acclimates.

Also, if you're a seasoned runner, keep in mind that this exercise adaptation applies to you too. Beginning a new resistance training program in the middle of your marathon training, isn't a wise thing to do. You're thinking that you'll become stronger, but keep in mind that your fitness level and your running fitness will dip while you acclimate to the new demands you're putting on your body. Better to begin that new resistance training program in the off season before you begin your race training.

So, if you're a new runner and struggling, think about that red-faced, irate lady behind me in the ATM line and chuckle. Know that taking your time will get you where you need to go and you'll get there injury-free (try to avoid that whiplash thingie, though).
Posted by RunnerDude at Saturday, February 05, 2011

well written and fabulous post "Dude". :) Love this and must share in one of my next blogs. I'm not a new runner but I've found myself needing to remember this as i've come back from a serious injury. It has taken time to get back to where i was but I've just needed to be patient and realize that this was just going to be one of those slower ATM machine moments with my running progress. Glad you didn't get shot in your minivan. What kind of mini van? I swore I'd never have the dreaded minivan and now look at me...three kids and a Sienna. Ha!

We enjoyed the article. Thanks for all of the great advice.

Thanks Reid and Marie!!

After yesterdays 14 mile long run, I told myself that my body just has to adapt. So this post was just what The Runner needed.

Hi The Runner! Thanks man. Glad it helped!

Only you, Thad. Attacked by snakes, geese, owls, and now rapid women at the ATM. Great post!

Hey Dena! Yeah, gotta watch out for them cougars. LOL!!