Win A Pair of Tickets to the Hood to Coast Movie! 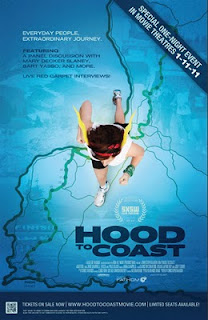 AND THE WINNER IS.....
Caleb Kinney of Pasadena, MD!  CONGRATULATIONS Caleb!
Enjoy the Movie!
A couple of weeks ago, I posted on an awesome movie coming out on January 11th for a special one-night showing--Hood to Coast. Hood to Coast is an inspiring new documentary that follows four teams with various levels of athletic ability on their epic journey to conquer the world's largest relay race. Some run to test their personal limits, some to overcome personal obstacles, and others leap in blindly looking for a way to shake up a complacent life. As you follow these four teams, you realize that winning isn't everything in a film that takes a celebratory look at personal motivation and attempting the extraordinary. Tickets are available at FathomEvents.com now!

Last week I had the opportunity to talk with Christoph Baaden, the director and producer of the film. Come to find out he got his MFA at the University of North Carolina-Greensboro (UNCG), right here where I live! Small world, huh? A few years back, Christoph was asked by his producing partner (and wife) Anna to fill in on a Hood To Coast team. From the moment he hit the mountain, he was overwhelmed by the sense of adventure and community that was evident even as people put themselves through a grueling challenge.

Within days, the production team began working on a proposal for a feature documentary about the world's largest relay. The idea was not to simply document a race, but to experience an event of epic proportion through the eyes of the people crazy enough to do it.

Filming began months before the race, eventually narrowing the cast of characters to four teams: the novices, the experts, the survival story, and the story of a family healing.

Over 100 crew members from both Portland and Los Angeles gathered to film the two day race in August. Even for the experienced crew members, the scope of the shoot was overwhelming. Over the 36 hours, the crews worked in alternating shifts, covering 197 miles of Oregon wilderness with limited cell phone reception. Each of the four main teams had their vans embedded with microphones and extra lighting, along with a field director, camera and sound operator who all traveled hidden in the trunk. In addition it took seven more film crews, timelapse cameras, cranes, and a helicopter, all strategically moving to capture the magic of the event.

With over 500 hours of footage editing took over a year. When the picture was ready, composer Nathan Barr signed on and recorded an incredible score, the final glue that the movie needed.

The film was honored to have its film festival premiere in March 2010 at the prestigious South By Southwest Film Festival in Austin, Texas.


Drawing for Free Pair of Tickets!


Now one lucky person will have the awesome chance to win 2 free tickets from RunnerDude's Blog, thanks to Christoph! To enter, first [click here] to make sure the movie is playing at a theater near you, then simply email me at runnerdudeblog@yahoo.com and be sure to put "Movie Tickets" in the subject line of the email. In the body of the email, put your full name, mailing address and phone number. The winner's name/info will be forwarded to Christoph. Each email will be assigned a number in the order that it's received. The True Random Number Generator  will be used to select the winning email entry.
Hurry!!!  You only have until end of day on
Wednesday, January 5th, 2011 to enter!!
The winner will be posted on the blog on Thursday, January 6th.
Hood To Coast Movie Trailer with Bart Yasso Intro from HoodToCoastMovie on Vimeo.
﻿

Awesomeness. I can not wait to see this. I am running Ragnar Relay NY this May with eleven other crazy people. Can not wait!

Very Cool idea, but for my bad luck I live outside the States. I think this is an inspiring movie will it be available world wide ??

Hey Mark! Looking forward to it too! I've heard the Ragnar is an awesome race. That should be a great challenge and big fun!! Fingers crossed on the tickets!!

That sounds awesome, I can't wait to see this.

Awesome Giveaway!!! I can't wait to see this movie. I'll be keeping my fingers crossed.

Awesome! Thanks for such a great chance - can't wait to see this either way!!

Congratulations to the winner of the movie tickets--Caleb Kinney of Pasadena, MD

I can't wait to see this movie! I remember when Spirit of the Marathon came out for one night. The movie theater was packed with runners. It was a fun atmosphere, kind of like a race and date all-in-one=)