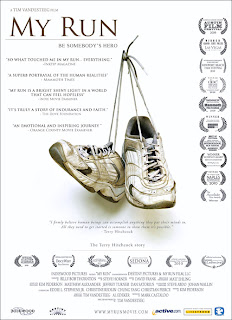 About a month ago, producer and director Tim VandeSteeg contacted me about a new documentary, MY RUN that features the amazing story of Terry Hitchcock who completed the equivalent of 75 marathons in 75 days. I wasn’t familiar with story, so I was immediately intrigued. We chatted on the phone for a while and Tim asked, if I’d like an interview with Terry. My response? “Heck, yeah!” So, a week or so later, I spent about an hour chatting with this truly inspiring man, now in his 70s.

I’ve met some amazing people through the interviews I’ve done for the blog. Terry Hitchcock is definitely one of them. Funny thing is, Terry’s not really a runner. Well, he did run the equivalent of 75 marathons in 75 days, and yet he doesn’t describe himself as a runner. This man’s story is more about the life marathons many of us run each day of our lives, day in and day out. Yes, his story does involve physical running, but each step Terry took in his 2000+ mile journey from St. Paul, Minnesota to Atlanta, Georgia contains so much more meaning than steps taken in a typical marathon. Each of the 3,000,000 steps in Terry’s 75 day journey represents the struggles of the single parent and the kids of single-parent households. 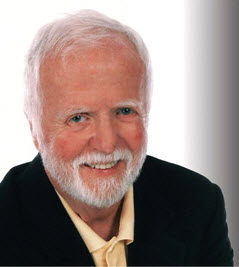 Terry’s story begins like many. Boy meets girl. Boy and girl fall in love and soon after, three little ones arrive. Life was like a Norman Rockwell painting. But When Terry’s wife, was stricken with breast cancer in her early 30s life began to change. Like a thief in the night, cancer took Terry’s beloved and suddenly his entire life changed.

A couple days after his wife’s funeral, terry returned to work and within two minutes he was told he no longer had a job. His office was cleared out and was now the new boardroom. Within a blink of the eye, Terry had gone from a Norman Rockwell life to widower, single-parent of three, and unemployed.

I asked Terry how he was able to deal with such a domino effect of loss. He said it was the children that helped him pull it together. He decided to change his entire life and get away from corporate America and learn how to be a good parent. So, Terry started on a new path. While raising his kids he started 5 companies that were pretty successful and allowed him time to be with his kids. Terry didn’t want his children to experience the instability that he had growing up as a child.

Terry shared that he was the child of a broken home. His mother battled many demons. At 6-years old Terry was even kidnapped by his father, but upon his return to his mother, his father was rarely in his life. Terry was even in a street gang as a youngster. He says, that by today’s standards, they didn’t do really bad things, but nevertheless, the gang was not the best role model.

Things began to turn for the better around the 7th grade when Terry went to live with his grandparents in Vermont. That event totally changed Terry’s life. His grandparents lived in a very small town of about 400 people. The town’s residents played a big part in Terry’s upbringing from that point on. Terry said, "The town put their arms around me and said, 'You’re going to be okay.'" Life continued to get better and better. He met his first wife, Sue while in college at Bowling Green, and as mentioned earlier, they began a wonderful life and soon had three children, a sheepdog, a station wagon, and a beautiful house.

So, life was different and life was hard without Sue, but Terry managed to build a strong family unit with his kids. In doing so, his eyes were opened to the hardships—emotional and financial—that single parent-families face. 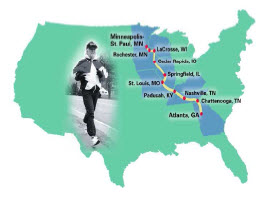 One night in 1994, Terry was sitting at home with his kids (by then in their late teens and early twenties) and he said, “You know, I want to give something back. I want to do something for single parents and their kids.” So he started researching how many millions fell into that category (at the time about 35 million). Then he recalled Canadian, Terry Fox who at 18 years old was diagnosed with bone cancer and forced to have his right leg amputated above the knee in 1977. While in hospital, Terry Fox was so overcome by the suffering of other cancer patients, many of them young children, that he decided to run across Canada to raise money for cancer research.

Terry [Hitchcock] began to think, “you know Terry Fox really wasn’t a runner, he was running to get the media attention for his cause, maybe I can do something similar to bring attention to the plight of single-parent families.” Terry decided Americans needed to see an “ordinary guy doing extraordinary” things for a cause. So, it was decided. He’d run from St. Paul to Atlanta.

Beginning in 1994, Terry trained for 17 months. The target date for his run was May 2, 1996. His trainer (Scott Meier) knowing there was no way to prepare Terry (who had never run in his life) for such a journey, focused on teaching Terry how to never give up and how to “climb the highest mountain.” So, Terry ran 2 or 3 miles a day (everyday) and that was pretty much it for the running. However, Scott had Terry do lots of other training and would push and push Terry so he’d go the extra mile pushing beyond his physical abilities.

Halfway through the training, Terry had a heart attack. His cardiologist said it was impossible for him to run. He shouldn’t even consider it. Four different doctors told Terry he could not do the run to Atlanta. Terry had his mind set, though and he recovered and continued with his training. Terry never told his trainer he had the heart attack until just a few years ago. During the time, Scott thought Terry had been on an extended vacation. 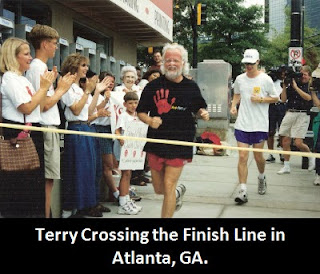 So after 17 months of training, a heart attack, growing his white hair long, and turning 57, Terry set off on his 2000-mile trek to Atlanta. The night before the run, the Minnesota Twins gave Terry a huge send off, and then on May 2, 1996, Terry’s first day of the run, he ran 31 miles. Terry said, “I thought I was going to die. It was terrible. It took me 4 days to get out of the state of Minnesota.”

After 30 days, all but one member of his crew (his son) left. They said it was too hard. But with the support of many along the way, Terry did in fact finish his trek to Atlanta covering the distance of 75 marathons in 75 days.

A new full-length documentary movie titled MY RUN has been made about Terry’s amazing journey. Indiewood Pictures in Association with Destiny Pictures presents this 10-time award-winning and critically acclaimed inspirational documentary, narrated by Academy Award winner Billy Bob Thornton. The film is Directed and Produced by Tim VandeSteeg and Produced by Mark Castaldo.

MY RUN has teamed up Lance Armstrong’s Foundation LIVESTRONG, ACTIVE.com and Life Time Fitness and other promotional partners for its 2011 theatrical and DVD release. MY RUN’s message is to be somebody’s hero and audiences can “Be Somebody’s Hero” by purchasing a ticket to MY RUN, because a portion of each ticket sold will be donated to LIVESTRONG to FIGHT CANCER. Doug Ulman President/CEO of LIVESTRONG was quoted as saying, “Your film [My Run] is so important to raising awareness of so many issues including the power of the human spirit. Mr. Hitchcock’s vision and story is one I will never forget.”

Be sure to check out the MY RUN trailer below, show support and stay tuned with MY RUN updates by JOINING its Facebook FAN PAGE at www.facebook.com/myrunmovie and follow on Twitter @MyRunMovie. Also check out the official website http://www.myrunmovie.com/

STATEMENT FROM DIRECTOR TIM VANDESTEEG
What inspired me to make this film? 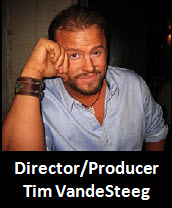 First and foremost, meeting Terry and hearing the story of his life as a single parent and of his megamarathon. I can relate to Terry’s experience on so many levels. My mom raised my brother and me on her own in the late 1970s and early 1980s. I know firsthand what it’s like for kids to grow up in a single-parent family and how hard it is for single moms and dads to cope with all the challenges their situation throws at them. I share Terry’s intense desire to show that to the world.

Second, I love “hero triumphs over all” stories. In many
senses, Terry is a real-life Forrest Gump, someone who had all the cards stacked against him and still managed to come out with a winning hand. Terry succeeded in the tremendous challenge of raising three kids on his own. That’s an incredible accomplishment but it’s not a unique one: many other moms and dads are going through the same thing.

What makes Terry’s story special is that after raising his kids, he took it upon himself to make life better for other single parents and their kids. At the age of 56, out of shape, with heart, knee, and ankle problems, he decided to run from Minneapolis to Atlanta in 75 consecutive days to bring attention to and provide a voice for single parent families. Despite the cold and heat, the rain and wind, the irate drivers trying to knock him off the road, the loss of all of his support team but one, Terry made it and touched hundreds if not thousands with his courage and his message along the way.

That’s why I made this film. I want as many people as possible to see it and be inspired by its story the way I was, to learn that with guts and stubbornness anything can be accomplished, and that with compassion and caring, every individual can make a difference in this world.


Be sure to be on the lookout for when MY RUN comes to a theater near you and to learn more about Terry be sure to check out his book, A Father’s Odyssey: 75 Marathons in 75 Consecutive Days (Bascom Hill Publishing Group, 2009).
Posted by RunnerDude at Wednesday, January 12, 2011

I'm emotional just watching the trailer. His story is inspiring and motivating - a good reminder that we can do anything in this life we set our mind to!

I was looking up for something about the movie and ended up on your blog. Awesome :)

My husband and I like to watch an inspiring running movie before we run a race. Our next race is this Sunday. We watched My Run 2 nights ago. I have to say that I am AMAZED at this man's determination and quiet fortitude. He is an inspiration to all. He truly makes the impossible seem possible.