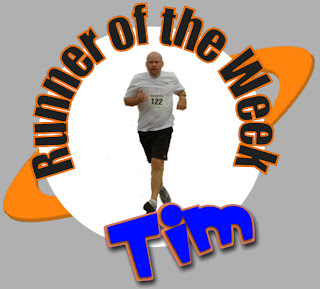 I've been following this week's Runner of the Week—Tim Wilson— through his blog and on Twitter for quite a while. His story of a complete lifestyle turnaround for himself and his family is truly amazing. Read on to find out more about Tim's story.

RD: Where are you from?
Tim: Currently live in Gwinnett County in NE Atlanta.
RD: Share a little about yourself. What do you do for a living? Hobbies?
Tim: I have been happily married for 20 years and have three awesome kids, two daughters in high school, and a son in elementary. I am a programmer, mainly working with .NET technologies and mainly for the web, but also am kinda an IT jack of all trades since I work for a smaller company. For hobbies I don't have many. I tend to focus on a couple things at a time. My first and foremost is running, and second is blogging and everything that goes along with it from a social media and technical standpoint. Of course my wife and kids and all their activities are important, but I don't consider those hobbies.
RD: How long have you been running?
Tim: I have been running for just over 3 years, I started in February of 2007.
-
RD: What got you into running?
Tim: I used to run XC and track in high school and loved it. I tried a few times over the years but never got very far. I was changing my lifestyle and losing weight. I started just walking, but then one day decided I would try running. It was slow going and very short, but grew each time I tried. I guess you could say my poor health and wanting to change it got me into running.
RD: What do you enjoy most about running?
Tim: I love so much about it that I just don't know where to start or end. I love how it makes me feel, how much energy it gives me, how I don't have to worry about myself physically and how I can eat. :) I also love the camaraderie and community around it and the change it has made in my life and my family's life.

RD: What are your favorite training foods?
Tim: I have never really thought about this before. I like food period.

RD: I'm with you on that. I eat pretty healthful food, but I love my chocolate cake once in a blue moon too! LOL!

RD: Are you a lone runner or do you run with some buddies? What do you like about each?
Tim: I am mainly a lone runner. 95% of my running is done alone in the wee hours of the morning. I like the flexibility of being a lone runner since I can then go when, where, and however far or fast I want to. I do really enjoy running with my kids as well though and running with a running group at least once a week. This is all fairly new though in the past year, and the group runs in the past couple months. I like the group runs because you tend to get outside your comfort zone and push a bit harder than by yourself.
-
RD: What’s the funniest or oddest thing that’s happened to you while on a run?
Tim: I could tell (and have told) a lot of stories about this so it is hard to find just one. Two years ago I was just coming off of setting a new 5k PR in the toughest course I have ever run. I was hoping to set a new PR and hopefully drop under 21:00 in my upcoming race the second week in June 2008. I lined up near the front and was ready to go. The gun went off and I started, but didn't get far. Less than 100 yards into the race I was tripped while in mid-stride and went down hard on my shoulder and head. After getting up it didn't take long to find that I had broken my collar bone in multiple places. 8 months off from running and multiple surgeries later I felt like I was almost starting over. The next year when I ran that race I wasn't anywhere near setting the PR much less getting anywhere near the 21:00 time. I was also a bit nervous running the first time back, but I was running it with my daughter so I had a bodyguard. :)
RD: Ouch! Good comeback man!

RD: For the good or the bad, how has running affected you personally?
Tim: It has changed my life completely. It is one of the main driving factors in my life. It has given me a way to help lose 90 pounds and more importantly a way to keep it off. It has brought back energy that I had lost for so long, and it has given me something to pass along to my kids and others that know me personally, through my blog, or through any other social media. It is truly one of the best feelings to be told that you were the inspiration for someone that is running, eating better, or just living a healthier life.

RD: Do you have a favorite brand of running shoe? Which model? Why?
Tim: I have run in NB 767, 768, 769's exclusively until these past few weeks. I had good luck and didn't want to change. I was recently sent a pair of Pearl iZumi SyncroFuel XC's and have been running in them a lot lately as well. If I had to choose right now I would choose the Pearl iZumi's.
RD: Cool. I'm pretty loyal to a shoe once I find one that works well for me too. I'm lucky in that I get to test-drive lots of different shoes for various shoe companies and recently I test out a pair of the SyncroFuel XC train shoes and the road version too. I was impressed with them as well.
RD: What’s your favorite race distance(s)? Do you have a favorite race you run each year?
Tim: My favorite race distance is probably the half marathon, but of course only if I have been training for it. If I haven't been training for it, it is just 13 miles of torture and .1 of pure bliss..... or at least just really slow. My favorite race though is a 5k, specifically the 5k I mentioned above. It is the Saratoga 5k Fun Run. It is a very small local race that is run in a neighborhood without closing any roads. It was the first race I ever ran in, and the race that I finished dead last in. What makes it even more special was that it was also it's very first running. Only myself and one other runner has run it every time for the 4 years it has been run. Even though I came in dead last the first year, I finished second overall the second year (no, I am not that fast, it is just a very small race) The added benefit is that this is the hilliest course I have ever run and where I still hold my 5k PR.
RD: If you were speaking to a group of non-runners or runner wannabes and trying to encourage them to run, what would you say?
Tim: Take it slow at first. Don't expect to run very far the first time, or even for a while..... and that is OK! Build it up slowly and don't try to go too fast (while running, or while building up to a mile and beyond). Take the time and the money and go get fitted for some good running shoes, without them you may not be running long, or may be running in more pain and doing more damage than you need to. 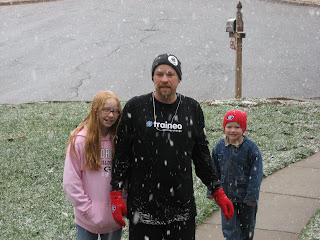 RD: Open Mike: Share anything you‘d like about your running experiences, past accomplishments, goals, dreams….anything you haven’t previously shared.
Tim: If you have ever read my blog you know I am not known to be short winded but let me give it a shot. As I mentioned earlier, I started running while losing weight. More specifically I let myself get horribly out of shape after high school and put on close to 100 pounds of unneeded blubber. I finally had a doctor tell me I needed to lose weight at the end of 2006, so decided to make it happen starting January of 2007. Running was a key part of the 90 pound weight loss I had that year. Running has also changed my family tree. None of my kids would have been interested in running since we lead such a sedentary lifestyle, but because I am now a runner all of my kids have taken up the sport. One of my daughter's just finished her freshman year in high school where she ran varsity on XC and ran in state. She also was very competitive in track where her older sister joined her in running. They are both currently training for XC in the fall. My 8-year-old son has run with me off and on but is still trying to find the love that his older sisters have. Following my first marathon I took some time to back off the miles a bit. I have plans to run at least one marathon in the fall and may start training for an ultra sometime after that.
Thanks Tim for sharing your story! I can't wait to eventually read the recap of that ultra!! You truely are an inspiration to runners, Dad's, and familys everywhere! Be sure to check out Tim's blog—26.2 Quest.
Posted by RunnerDude at Saturday, June 05, 2010

I never get tired of reading inspirational stories like this. The picture timeline was amazing. Nice job Tim, you rock!

Thanks Chris and jkaiser4! And thanks Thad for letting me tell my story!

Sure thing Tim! Keep up the aswesome job! Family's lucky to have such an insprired dad!!

Great story! Tim's about 2.5 years ahead of me in his transformation. It really keeps me inspired to stay the course. I'll try to avoid the collar bone fracture at my races though, that didn't sound like a lot of fun.