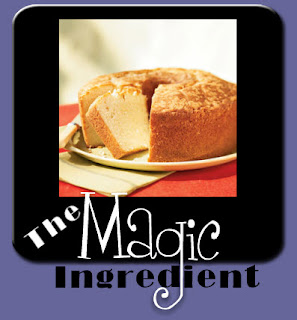 My maternal grandmother—Mama Henry—made the best turnip greens. She fixed them like none I've ever had since. Somehow she cooked, drained and then chopped them fine. Then she cooked them still more in an iron skillet with bacon drippings. Yes, I know, doesn't sound very healthy, but it was the late 60s and I was only in kindergarten. Mama Henry passed away when I was in 2nd grade. And to this day, I still don't know exactly what was in those greens, but whatever that magic ingredient was, it made them pretty darn tasty.
-
And then there was my paternal grandmother—Mama Mac—who was famous for her pound cakes. A slice of her pound cake buttered and toasted with a dollop of vanilla ice cream on top was pure heaven on earth. Mama Mac believed that if it was "real" (i.e., whole milk, eggs, cream, sugar, etc.) then it was good for you. Growing up, we didn't have Mama Mac's pound cake all the time, but when we did it sure was good. Mama Mac passed away when she was 82; I was in my late 20s. We had her pound cake recipe, but no matter how hard different family members tried, no one could match a Mama Mac cake. One day, a cousin found Mama Mac's "real" recipe for here cakes. Basically all the "good" ingredients were doubled (8 eggs, 4 sticks of butter, 2 packages of cream cheese). That was her magic ingredient. I think a whole lot of love for what she was doing when she made her prized pound cakes was a key magic ingredient too. That kind of magic you can't replicate.
-
There are magic ingredients for marathon training too. Just like my grandmothers had different magic ingredients, runners will vary in their marathon training magic ingredients too. For many years, my marathon training consisted of weekly runs of no particular pace and then the weekend long run. Later I discovered that throwing in some speed work such as intervals really helped my endurance as well as upping my lactate threshold and VO2Max. But for me the real "magic ingredient" for me is the tempo run. In my old training method, I always wondered how (if you wanted to run a certain pace, but never ran that pace or faster in training) were you going to maintain that race pace on race day. Adding Tempo runs to my training helped answer that lingering question.

I think it's important for your body to experience running at faster paces if you're going to be running a faster pace in the marathon. Don't get me wrong. Your long slow runs, are still needed. They are designed to build your endurance both muscular and aerobic in order to run those 26.2 miles. Tempo runs, however are a nice blend between really fast speed work such as intervals and your long runs. Tempo runs typically begin with an easy-paced warm up mile and then the pace is ramped up to near 10K pace for the next 4miles or so before slowing it back down for the last cool-down mile. Hal Higdon also advocates using more of a timed method kind of like extended fartleks where you run easy for 10mins, then 10K pace for 10 mins, then easy for 10 mins, etc. So a 40-minute tempo workout would look like 10+10+10+10 = 40. Before the dawn of the Garmin and GPS devices, this timed method worked really well.

Tempo runs (like intervals at the track) are a great way to up your lactate threshold—the point just before lactate acid builds-up in the bloodstream causing fatigue slowing you down—that tell tale burring in your muscles. If you can push that threshold out, then you'll be able to go at higher intensities longer. Also, if you need to pull out all the stops later in a race, you'll be better equipped to do so.

Like I said earlier, everyone is different. What works for me may not work for you and vice versa, but one thing I've learned over the past 25 years of running is that what works for someone else might just be worth trying...at least once. So, what's your magic marathon training ingredient?
Posted by RunnerDude at Monday, June 21, 2010

And I thought you were going to post the recipe/directions for that pound cake. :)

Thanks for the info (not about the pound cake, but about the tempo runs). I'm going to incorporate that into my training.

Hi Sunflower Kisses! It would make a great carb for a training food!

YES! Adding tempo and speed totally helps so much in your final result! Can't wait until I can run consistently again!

I love the pound cake picture.

I was really hoping for a secret ingredient in pound cake to help me run faster. Such a disappointment! Thanks RunnerDude for great posts!

I don't think I've found my magic ingredient yet, but I think that race pace training and more temp runs will be the next thing I try. It just seems to make sense. Thanks!

Hi Caratunk Girl! You'll get back soon. No doubt!

Hey RJ! Hey maybe I should try packing some poundcake on my long runs!

Hey Jen! Yep, add some speed work either interval, tempo runs, or both. I think you'll be happy with the results.

I love your posts.

Hi EMZ! Thanks! Yep, hills can be a killer, but they're good for speed work too and strengthening those hammies!

I love my tempo runs Runnerdude. I read something a while back something to the effect of if you train the same, you stay the same type deal. To get faster, you train faster. I miss my Grandma's Greens, with fatback and ham-hawk, (what ever that is, i just heard the term thrown around a lot. lol) Black Eyed peas with bacon drippings. Darn, I think everything had bacon in it, except for the pound cake. lol. Thanks for sharing, and also, Congratulations to the ice bath on page 36 of July's RW. Take care man, and also, could you do a post some time about preparation and execution of running in the freaking heat and humidity? Thanks

To Kenley, ham hocks are a joint in the hog's feet. :)
And RunnerDude, I second the motion for some information about preparing and running in the heat and humidity. It gets to be 80s here by 7ish.

Hi Kenley! Thanks! Yep,I'll see if I can do some heat related posts. I've done some in the past too that you can use the search box on the blog to find.

Hi Josh! Mystery solved!Do you eat that or sprinkle it on before a run?

I totally agree. I did a tempo run this morning and I truly believe they are one of my best training tools. It's not only physical practice but also mental practice. tempo runs dont' exactly feel "fun" like a long slow easy run and they don't end quick like a speed session so they cause you to practice really "dealing" with a certain uncomfort for a while... if that makes sense. I love them :D

Hi Lauren! I agree. Definitley mental prep along with the physical.

Thanks Runnerdude, I will check them out.

I love this post : ) I have never tried turnip greens or pound cake, but my Great Grandma made one mean gingersnap, very yummy and full of the good stuff, I'm sure!

Since I am smack dab in the middle of my first marathon training ever, I have no magic ingredients for you. But, I like the idea of simulation. I would feel much more confident, I think, come race day. Thanks for the idea, I am going to try it!

Hi Wendy! That Gingersnap sound yummy! I'm so excited for you and your first marathon experience. You'll do awesome!Relish every moment and celebrate every achievement along the way no matter how small or large.