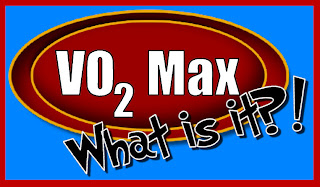 You've probably heard about it or read about it, but what exactly is VO2Max? The term broken down actually represents the following:
V—volume per time
O2—oxygen
Max—maximum
VO2 max is also referred to as maximal oxygen consumption, maximal oxygen uptake, peak oxygen uptake or aerobic capacity. It's basically a lot of fancy words for the maximum amount of oxygen your body can take in and actually utilize at max exertion.
Okay, so now you know what the cryptic term stands for, but why is it important? Well, basically the idea works like this....increase your O2 uptake and you'll run faster, or bike faster, or swim faster. Your performance in any aerobic endurance activity will be improved with and improved VO2Max.
We've all seen runners huffing and puffing who look like they're about to hyperventilate (and if we're being honest, we can all probably include ourselves in that group at one point or another). It's very common to see beginning runners breathing very heavily. That's because as the new runner ups his heart rate, his body automatically knows it needs more oxygen, so the most natural thing to do is to breath faster. Problem is that the breaths are usually shallow and even though the runner is breathing rapidly, he's not taking in enough oxygen.
-
The amount of air inhaled and exhaled with each breath is your tidal volume. It increases from .4 to 1L at rest to as much as 3L during aerobic exercise. An aerobically unfit person's tidal volume is going to be less than that of an aerobically fit person. Also, a person who's aerobically unfit isn't going to have a very complex network of capillaries (the smallest blood vessels woven throughout the muscle fibers) at the muscle level. A person who has a higher tidal volume and a more complex system of capillaries at the muscle level is going to be able to get more oxygen into the lungs which will eventually be diffused into the pulmonary blood which will make its way down to the capillary level and then to the many mitochondria in the muscle. Mitochondria are found inside the cell and they're the power producers. The mitochondria is where cellular respiration occurs which produces fuel for the cell's activities.
Great news is that you don't have to settle for a low tidal volume, lack of a complex capillary network, few mitochondria or even a low VO2Max. By doing aerobic exercise (running, cycling, swimming, etc.) you'll increase all of the above. The more you run, your body will actually increase and build that important network of capillaries in the muscles and when that happens you'll actually increase the number and size of the mitochondria in the tissue. When that happens your body will be more efficient at extracting oxygen from the blood and getting it to the muscle where it's needed for energy production.
A runner can improve their VO2Max even more dramatically by doing more intense workouts such as tempo runs, track intervals, fartleks, or hill repeats. New runners will see the most dramatic increases as they work to improve their VO2Max. Once you reach a certain level, the athlete will plateau with their VO2Max, but continued VO2Max training will help the more experienced runner maintain their VO2Max level for longer periods of time helping them become even more efficient runners. There is a ceiling to the VO2Max and genetics play a role in how high the ceiling is. So, if you can't seem to get it past a certain level no matter what you try, you can blame mom and dad. Also, as you age, your VO2max will naturally begin to decrease a little each year. Ain't Mother Nature grand.
-
A long slow run is typcially run at about 70% of your VO2Max. Tempo runs maybe closer to 80-85% of your VO2Max and Intervals may reach the 85-90% level. Some treadmills have made it easy to gage this by using METs (metabolic equivalent scale). Once you know your VO2Max score, just divide that number by 3.5 and that will give you your VO2Max in METs. So if your VO2Max score is 40 then the METs equivalent would be around 11. On a treadmill that has METs, you would know that your max effort would be at the 11 METs setting. Your regular runs would be 70% of that so the METs setting would be 7.7. If you were doing intervals the setting may be closer to 9 or 9.5. Not all treadmills have a METs scale, but if yours does, it can be a useful tool when training.
There are a couple of different types of VO2Max test. The most accurate is in a lab setting where you're hooked up to a breathing apparatus that actually measures the amount of oxygen you inhale verses what you exhale. But, you can also get a pretty accurate VO2Max reading through a Step Test or the 1.5 mile run test. There's also a bike version and walking version of the test. Check with your personal trainer or local gym to see if they provide VO2Max testing. If you're in Greensboro, NC, contact me at runnerdude@runnerdudesfitness.com and set up an appointment for a Fitness Assessment in which a VO2Max test is included. I'd love to work with you in helping gather an array of baseline fitness data including vitals, body composition, muscular strength, muscular endurance, flexibility and stability, and VO2Max.
-
So, if you're new to running, hang in there, it will get easier. Just stick with it. And if you're a seasoned runner, try mixing up your workouts with some speedwork or hillwork to up or help maintain that VO2Max.
Posted by RunnerDude at Thursday, June 03, 2010

Great post! Very encouraging... I've definitely noticed it getting easier as time has gone on though I"ve done no "official" VO2 training :D

That's awesome! Keep it you!

Great post. I started running a year ago and noticed that whole heavy breathing thing going on. Now a year later although a lot my first 2km always has me breathing really heavy and then it gets quiet and controlled. I would love to have my VO2 tested.

What's a fartleck? Funny word. My biggest VO2 improvement came when I started lifting some weights.

Good post. I've done one before but it was on a bike and I wans't into biking a the time and my legs died way too early.

Hi Barbie!That's great. I think the first bit of any run is always the toughest. You're still just warming up.

Hi Joe! LOL! A Fartlek is a Swedish word for "speed play." A fartlek is an informal interval thrown into a regular run.It can be a burst of speed for a certain time or distance. Here's a link to a post I did on fartleks a while back that expalins it more. http://ncrunnerdude.blogspot.com/2009/04/you-want-me-to-what-lek.html
Research shows the resistance training in itself doesn't improve VO2Max levels, but I think when a runner adds resistance training to their routine, it increases their muscle endurance and makes them an efficient runner therefore helping them be faster. My thoughts anyway.

Hi Boris! Yep, the test can be tough. I usually give my non-running clients the step test and that's a challenge in itself! It's tough!

Really interesting post. I haven't quite had the nerve to follow up on doing the breathing apparatus as I am told that one tends to drool like a Golden Retriever looking for something to drink.

Unfortunately, I think I am now on the diminishing return end of the VO2 scale. However, surely including speed workouts will make the drop less dramatic than if I only ran long runs?

Hey Mark! You may have plateaued with your VO2Max, but I doubt you're on the decline. You're still a youngen! LOL! Keeping speed work in your training will definitely help maintain your VO2Max level. Some of my clients with the highest VO2Max scores are in there mid to late 50s!!