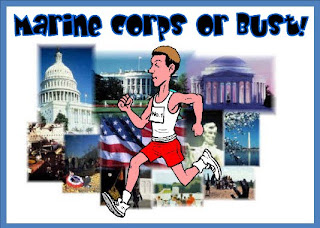 Around this time last year, I was working on my training plan for my fall '09 marathon—Marine Corps. My plan was to run Marine Corps with two of my running buddies—Andy and Kelly. A bunch of us from my running group were training using the F.I.R.S.T training method which consists of three hard running workouts a week (intervals, tempo, long run). Then there are two days of very specific cross-training. The training started out fine. It was hard, but we were all doing really well.

Around this same time, I began a 6-month personal trainer diploma program at NPTI (National Personal Training Institute). The program met 4 days a week from 9:30AM to 2:30PM and I had an hour commute each way. The program was very demanding in that we worked-out/trained 2 hrs each day. So you've probably already put 2 and 2 together and have surmised, that the marathon just didn't happen for me last year. There wasn't enough steam left in the engine for my runs after working-out and training at the gym. I decided that if I was going to go to the expense of the travel, food, and lodging, then I wanted the race to be more than just a fun run. I just couldn't justify spending that kind of cash without some larger outcome like a BQ. I was hoping to PR for Boston. So, I put my marathon plans on hold until this year. That was a really hard decision for me to make, but it was the right one.
For a long while, I had a rhythm of running one marathon (maybe two) each year. But that hasn't been the case the past few years. My last marathon was the Chicago '07 (yep, the year of the heatwave). Ended up being a good race (time-wise), considering the heat, dehydration, and a terrible calf cramp. In 2008 I ran The Ridge to Bridge Marathon in Morganton, NC. The first 14 miles are down a mountain! Unfortunately, at mile 15 I started having stomach issues caused by a mild ulcerative colitis flare-up brought-on by a recent flu shot. So, by mile 19, I was toast and rode with the EMTs back to the start. My two buddies (Andy and Kelly) both set PRs in that race and Kelly even BQ'd! And you already know what happened in 2009. So, fingers crossed, all will go well for fall 2010 at Marine Corps and I'll get back on track with my marathons.
I think just about all of my friends that used the F.I.R.S.T program last year, PR'd in their fall '09 marathons. It's a really good program, but a tough program and one I highly recommend you do with others for support. This year however, I'll be basically training on my own, so I'm thinking I'll use a custom-made RunnerDude training program. It will involve speedwork, tempos, and long runs, but not in quite as rigid a format as F.I.R.S.T. Also, I'll be packing in more miles and running more days a week than the F.I.R.S.T. program.
My speedwork will be comprised of Yasso 800s. I'll start out with 4 x 800s and by the end of the training, my goal is to be up to 10 x 800s. Bart Yasso, developed this method and discovered that if you want a 3:00 marathon then run your 10 x 800s in 3 minutes. If you want a 4:00 marathon, then run your 10 x 800s in 4 minutes. Between the 800s, you jog for the same number of minutes it took you to run your repeats. I'd heard about the Yasso 800s, but had never specifically tried them in training before. My recent interview with Bart Yasso renewed my interest in them and I've decided to use the Yasso 800s as my interval workouts in my Marine Corps training plan.
I also plan on running a weekly tempo run which will be run at just below my 10K pace. Both intervals and the tempo runs are great methods for upping your VO2Max. This increases your body's ability to better utilize the oxygen it takes in, getting it to the muscle where it's needed to make energy to keep you moving and fight off fatigue.
-
During my weekly long run, I plan to throw in some at-race-pace running segments. I'm a firm believer that (for the most part) the long run needs to be run at a slower pace to help build muscular and cardio endurance. But, I also think it's important to experience running at-pace during the long run in order to give your body experience running at the expected pace you'll be striving for during the actual race.
-
Core workouts will also be a mainstay during my training as well as some light resistance training for muscle endurance maintenance.
-
I finally broke down and bought a Forerunner 405CX. It was on sale for $100 off and it also included a $50 rebate. Decided I couldn't beat that. I'm looking forward to having varied running routes during my training. Being able to track distance no matter where I'm running will really be fun and liberating. (Only problem is that the flash drive that came with it doesn't work, so tracking my running data is a no-go at the moment. Garmin's been slow in the help department. I gotta get back on them again.) I'm excited and looking forward to getting started in the next week or so.
-
Keep me on my toes and check-in with me from time to time to see how my training is going!
Posted by RunnerDude at Saturday, June 26, 2010

Working on your own plan is probably best; you know what you need and can adapt it as work and family life changes.

Let us know what you think of your forerunner. I'm also in the market for one but am holding back a bit longer.

I'll be running MCM as well and just put together my own custom plan, with some ideas borrowed from Hal Higdon's plans. looking forward to hearing how your training goes!

I did a variation of the FIRST program last year with Yasso 800’s. I am a triathlete so the cross training was already in place. This allowed for me to BQ at my first marathon!

However, the program was very demanding. For the long tempo runs I did races – several ½’s, a 25k, a 30k, etc. I raced 7 times in 10 weeks leading up to the marathon. I’m not sure if I would have had the discipline to run the hard tempo’s on my own.

Good luck with your training plan.

excellent! I am a big fan of MCM (I BQed there last year), and I will be running it again this year. Good luck with your training!

Hi Cynthia! So far I love the Garmin. I'll love it even more when I can download my workouts.

Hi Tri-James! That's awesome about your BQ! I hope to do the same in DC. What's your next race?

Sounds like you've got it all pretty well mapped out to kill it at the MCM (Garmin pun not intended). Hope you'll share some of your custom training, especially the Yasso part. Looking to mix in some variety in my training this summer. If I can stay healthy I think I'll try MCM next year.

Good luck with training this year. I'm starting the Yasso 800s in my marathon training plan as well and I'm interested to see how it works out for other runners. And where did you find a Garmin for that price? I've been looking for one because my timex isn't cutting it anymore.

Hi dailykp! Cool. I'd like to hear how your Yasso training goes for you too. I got my Garmin at REI. It was a few weeks ago. It was $100 off then then there was a $50 mail in rebate. Not sure if the sale is still on, but worth checking it out.

I'm not training for a marathon, but if you need a running partner for any of these, I'll try to keep up with you. I want to make sure I don't fall too far off course.

Hey Dena! That's awesome! I'll definitley take you up on that!

I agree with adding at pace segments to your long run. My problem right now is that its so hot in Charleston that its hard to hit the pace. I am trying to concentrating on effort instead until it cools down.

I have a 12 hour race this Sunday so I should be pretty used to the heat after that :)

Hey Noah! 12hrs! You go man! I hear you about the heat. It's been in the mid 90s here in Greensboro for the past week or so. Yesterday I did my normal 5-mile route and thought I was gonna die. Felt like 10-miles. The shade felt just like the bright sunshine! Today and the rest of the week it's supposed to drop down to the 80s. I HOPE SO!!