Recently, I had the honor and privilege of interviewing Bart Yasso, Chief Running Officer of Runner’s World. Bart has been such a prominent figure in running over the past 30 years and has run so many races that he’s known to many as the “Mayor of Running.” You may also know Bart as the creator of the Yasso 800s, an innovative marathon training technique. I was nervous going into the interview with Bart, but once the conversation began, it was like talking to an old friend. Bart is one of the most positive, optimistic people I think I’ve ever met. Read on to learn more about Bart.

RD: Where is Runner’s World Located?
Bart: Emmaus, PA is the Runner’s World headquarters.
-
RD: What part of PA is that in?
Bart: It’s about 60 miles north of Philly, close to Allentown Bethlehem.
-
RD: How did it end up in Emmaus?
Bart: Runner’s World is owned by a company called Rodale which is located in Emmaus. It used to be located in the Bay area but moved to Emmaus back in 1985.
-
RD: So, your title at Runner’s World is CRO—Chief Running Officer.
Bart: Yep, greatest job in the world!
- 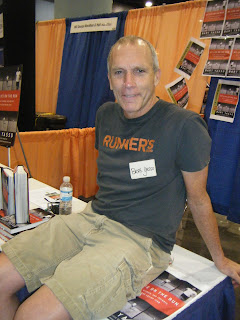 RD: What makes it the greatest job in the world for you?
Bart: Awe, what runner wouldn’t want to get paid to go around the world and do races? The thing I love about my job the most is the people I get to meet every weekend. I’m at weekend events 48 weekends out of the year. There’s about four weekends I stay at home—Christmas, Thanksgiving, and two other weekends for family functions or something else going on. Every other weekend, I’m at a race somewhere. And I just get to meet the most inspiring people that have overcome so much just to get to the starting line of the race and then the finish line is the culmination of their journey. I’m usually at the longer events like half marathons and marathons and of those, they're usually the bigger races. I do get to some smaller ones once in a while.
-
RD: I’ve had similar experiences with the Runner of the Week feature I do on the blog, although I rarely get to meet these runners in person. Some of the stories they share about the obstacles they’ve overcome through running are truly amazing and inspiring.
Bart: It’s mindboggling to me and it’s very humbling to me in my position. A lot of people will look at me and know my story and they think I’m inspirational or a hero, but I tell them all the time that I meet people that will blow you away…it’s just incredible.
-
RD: Why do you think so many people end up using running as a means to deal with and/or overcome hardships and life obstacles?
Bart: You mean running kind of being the tool to success?
-
RD: Yeah, you did that in your own life by using running to help you overcome a problem with alcohol as a young man.
Bart: I certainly did and you know if I had to use one word to sum it up, I think it would be inclusion. I think running is very open to include everyone and runners go out of their way to accept people into the sport. And you only go somewhere you feel wanted and accepted and feel like you’re a part of something. I think running has done a great job of that. An example would be wheelchair racing, blind athletes, and other physically challenged athletes. I mean when you go to the really big races, there are a lot of people in these categories. You know wheelchair racing is really like bike racing. It’s a wheel machine that they power, but bicycle racing doesn’t want these athletes, but we do. We accept them, we love including all athletes. We thrive off of the inclusion of everyone. If you ever go to the larger races the crowds just go crazy when the wheelchair racers begin their early start. They love it. And the runners are just so inspired by the determination and athleticism of the physically challenged participants. For us, inclusion is just mainstream, but in other sports, it just doesn’t go on.
- 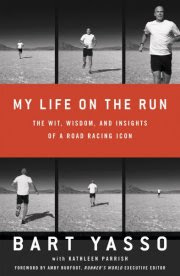 te in my book that the Comrades ultra marathon in South Africe was my only regret and I never really knew if I’d get there. Just didn’t know if it was a smart thing to do with my leg.
-
I got a cortisone shot in my leg, which helped by giving me some increased range of motion. It didn’t really alleviate the pain, but I could move a little better. So, feeling pretty good (shortly after) on Thanksgiving Day, I ran a traditional 5-miler with some buddies. When I got to the 5-mile marker I was hurting but oddly enough, I felt really good too, like I could go a little more. I decided not to push it, but that made me think about my next trip. I was going to Huntsville to be the guest speaker at their pasta dinner and the host for the weekend and that’s when I got this idea that I could actually run Huntsville. So I did. I got to the starting line not really knowing what to expect or if I’d even make it. I decided to start out slowly and take it easy, enjoy it and see what happens. I actually finished the thing in 4:32.
-
RD: That’s amazing. You hadn’t even really trained for it. 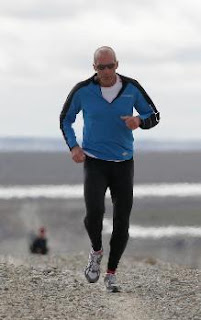 To learn more about Bart, be sure to check out his website and blog. Below is the first in the series of webisodes chronicling Bart's quest for Comrades. To see the second and third webisodes[click here]. Comrades will take place on May 30th. Be sure to send good vibes Bart’s way on that monumental day.
-
Thanks again Bart, for taking the time to share your story with RunnerDude’s Blog!
Posted by RunnerDude at Monday, May 10, 2010

Great interview!! I love Bart and live close to the RW HQ. It certainly would be my dream job!!

Yes, Dude terrific job with that, as usual. I put a link to it and this blog on my most recent post. Hope you don't mind. I liked it and do this blog and wanted to share.

Hey Scott! Thanks man! Adding the link on your blog is awesome! Thanks!

Great interview! I read Bart's book and met him at a race expo the day before my first marathon. He is great!

Delighted you got to meet him and loved the questions you posed too. Thanks for sharing it with us all.

Good interview. I'll have to pick up his book. There are so few really good memoir books out there on running but this looks like it may be one of them.

Hi Keri! It' so cool when you meet a famous runner before a race like that. I met Frank Shorter before I ran NYC one year and it really pumped me up for the race.

Hi Keri! It' so cool when you meet a famous runner before a race like that. I met Frank Shorter before I ran NYC one year and it really pumped me up for the race.

Hey Dena! Yep, check it out. I thoroughly enjoyed it. Actually read it in one sitting!

I loved reading this. You came up with some great questions and what an honor to interview Bart Yasso!!

fantastic interview! definitely gonna pick up his book asap. comrades sounds incredible, too - may just have to add it to my to do list!