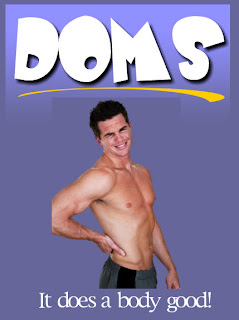 DOMS—Delayed Onset Muscle Soreness...we've all had it and we all hate it, but it's a necessary evil in your pursuit for a fitter stronger body. Whether you're a swimmer, a runner, a cyclist, a gym rat, or a combination of them all, you've experienced DOMS. You don't have to be a newbie to fitness to experience DOMS. Anytime you expose your body to new or more intense demands you're more than likely going to experience muscle soreness a day or two after the workout.

Lactate (a by-product of intense exercise) is often blamed for the muscle soreness, but lactate is not the culprit. Lactate actually isn't the bad guy it's often portrayed to be. A trained athlete can actually use lactate as an energy source. When an athlete pushes him/herself past his/her lactate threshold (such as in an interval workout), the body can no longer clear the lactate fast enough so it builds up and can cause that burning sensation in the muscles eventually fatiguing the muscles causing you to slow down. But if you've ever experienced that burn in an interval workout, you also know that if you slow it back down or stop and walk it off, that burn will eventually subside because the body pretty quickly is able to recoup and clear the excess lactate (usually within 30 minutes). DOMS, however, doesn't happen until the next day or sometimes not even until 2 or 3 days later. So, Lactate, you're off the hook.
If it's not lactate buildup, then what's the cause of DOMS? If you're a runner, you can probably pin point two types of workouts that might result in DOMS—short fast workouts such as intervals or hillwork and very long slow runs. Downhill running seems to cause the most intense DOMS. Whenever you up-the-ante with duration or intensity, you're putting your muscles under more stress. You're actually causing microscopic damage to the tiny myofibrils that make up the muscle fibers. Don't worry. I know that sounds bad, but it's not. This is actually how muscle becomes stronger. The pain you're feeling the next day or so, is the result of that microscopic muscle damage. But during this time the body sends in the troops and begins to repair the damage. It's this repair process that actually makes the muscle stronger. Because the muscle will be stronger, the next time you apply the same stress that caused the initial DOMS, your muscles will be able to handle the workout and most likely you'll not experience DOMS. That's called adaptation. Your body has now adapted to the intensity level.
Because your body is an expert at adaptation, it's very important to always mix up your running routine. Have you ever heard someone say, "I run every day, but I can't seem to get any faster. I'm even gaining a little weight." If you dig a littler deeper into this person's running regimen, you'll probably discover that he may have the mileage, but he's running the same distance and the same intensity every time he runs. His body has adapted to this and so he's stagnated. In order to get out of this slump, he needs to mix-it-up by throwing in a tempo run, add some fartleks to a regular run, or add a day of speed work each week such as intervals or hill repeats.
DOMS is one of the biggest reasons newbies stop working out so quickly. Since becoming a personal trainer, I've become familiar with three different possible reactions to DOMS. The first is fear. Many newbies to fitness or running are convinced that they've injured themselves when they wake up a day or two later to extremely stiff and sore muscles. A second possible reaction is discouragement. Some individuals think, "Man, I must be in terrible shape to feel this bad. I don't think I have enough in me to deal with this kind of pain." And a third possible reaction is elation!"Oh man, I'm sore! Awesome! Bring it on! This means I had a great workout!" The third reaction is the best attitude to take. Think of DOMS as proof of your hard work. You may not believe it now, but after you've been working out for a while, you may even be discouraged if you don't experience DOMS after a hard workout. Don't believe me? Stick with it a while and you'll see!
Posted by RunnerDude at Thursday, May 13, 2010

Is it weird that this sounds wonderful to me?!? . . . "microscopic damage to tiny myofibrils that make up the muscle". ;)

Hi EMZ! No, that means your hardcore! Awesome! Now get out there and tear up some myofibrils!

I'm normally a number 3 reaction kind of guy... but I wouldn't mind (just once at least) going through a hard workout and not having any DOMs for a change!

Hi EZEthan! I'm with ya man. A break once in a while would be nice. But that's the nature of the beast.

Does DOMS diminish with fitness? Does it happen to elites or just us age groupers?

Great post and way to look at and think of DOMS as a badge of your hard work. Got to share this one with our ViF readers...keep up the great work and train safe!
Brian

Hi Kovas! Once you acclimate to an particular intensity, you won't experience DOMS, but anytime, no matter what your fitness level, you up the intesity you're going to experience some level of DOMS. Now, if you're a conditioned athlete, DOMS may not be as dramatic, than if you're brand new to fitness, but you'll still feel it. In this sense, "No Pain. No Gain." really is true.

Thanks for that post, creative way to talk about a common issue! I hope you dont mind, but I referred to it on my blog entry today because I have DELAYED ONSET FLOORING MUSCLE SORENESS . LOL
Basically, I am sore from life's projects of recent!
Check it out!
http://runningfool-ootaynee.blogspot.com/

I acutally celebrate soreness, as it reminds me of the hard work I put in and the fact that it will be making me stronger as I recover.

Hey Chad! Thanks for the mention in your blog! Hey, I've got some DOMS inducing chores at my house you can come take care of too!!!

Hey Chad, I love DOMS. If I did a different exercise, it means I did it good. Great post!

I still remember the first time we had to do strides in running class two years ago. I couldn't walk for days! Now, I can do speedwork and hills and not feel a thing. However, the half-marathon in April (long, slower run) did me in for about a week. Nice post, Thanks for the info!

Great information to share. It is too easy to get into a regular routine. I never really thought of that as a cause of DOMS.

Love it!! My only problem is being slowed down while super sore!! What do you reccommend as a work out when you are super sore. For instance I started in with lunges last week, a little to gung-ho mind you! I was sore for 4 days! All my runs this past week were worthless, at least seemed like I was going 10 min/mile pace instead of my usual 8:30 pace!! But I am determined to get those lunges back into the regiment and raise the bar!!

Awesome post! And BTW, I am looking at a move to NC in the fall! I am totally stoked about being in your neighborhood and hope to do some working out wiht you then!!!

Hey 5 Miles to Empty!
That's awesome you're moving to NC!What part?
As for the soreness...well, when you have an intense workout like that you're going to get the DOMS effect 24 to 78hrs afterwards. Sounds like yours is lasting a little longer. Probably best not to do an intense lower body workout while you're still sore. During that time you can do some upper body and core.
Sometimes when you feel like you've gotten behind in your fitness, you'll want to play catch-up by throwing in a really intense workout. Fight that temptation and add back those exercises gradually. Also, if you're in the training phase for a race or something, it's probably best to hold off on adding in intense resistance traning. Anytime you add a new stress to your body, it's going to pull you back a little (while your body heals and your muscles get stronger). This is normal. But if you do it during training it can do two things...First, if you're running slows, you may panic or become worried that your runnin is off. Second, if it's too close to race day, you may not have enough time to pull out of DOMS and you may be fatigued on race day.
Do the heavy resistance workouts during your basebuilding phase and then do a maintenance workouts during the training pahses.
Probably way too much info, hope it helps and look forward to meeting you guys in the fall!!!