The "Ah-Ha" Moment—Gotta Love It! 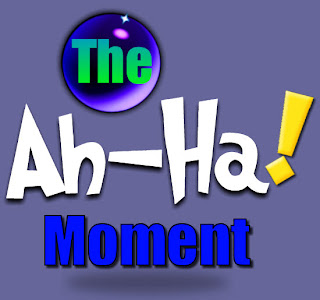 When I taught 5th grade (many moons ago), every now and then I'd see that "ah-ha" moment when the light turned on for a struggling kid. That moment is a very precious one. You're ecstatic for the child who's struggled and struggled to understand and now has mastered the concept or the task. And as a teacher, you're filled with a sense of accomplishment and self-worth, that you've actually made a difference with a child.

One such child for me was "Melvin." Melvin was over 200lbs in 5th grade. Looking at his records from previous grades, Melvin had always been in the "slow" group. But there was something about Melvin. Something in his eyes told me there was a whole lot more to this kid than he was showing. I began giving Melvin little academic projects to do on the side and I soon realized that he was very intelligent kid. Melvin's problem wasn't academics it was self-confidence. Not much had been expected of him previously and so he gave very little effort. These extra projects were just what he needed to build his confidence and break through to the real Melvin. I met with his parents and by the end of that year, he had been tested and it was revealed that he was actually academically gifted especially in the area of math. For 6th grade, he participated in special 6th grade class for academically gifted students and he just soared! I often think of Melvin and wonder how he's doing. He'd be about 30-years-old now. (Man I suddenly feel old.)
Yesterday, I had my first experience as a trainer with a running client having an "ah-ha" moment. It was with a member of my beginning running group. We just started our 4th week of the run/walk program that will eventually have the group running 3-miles without any walking. Last week, the plan had us rotating between running 4 minutes and walking 2 minutes over a 30-minute period. The ladies did great, but some were wondering how hard it was going to be the following week when the run portion would be upped to 5 minutes.
The first 5-minute run took place yesterday and all the ladies completed each 5-minute running section without stopping and they were quite pumped with their accomplishment. After finishing the last 5-minute run, one of the participants began to cry. It caught me off guard at first. I thought maybe she had twisted her ankle or something. So, I immediately went over, put my hand on her shoulder and asked was was wrong. She looked up at me and said, "I'm just so happy! I never thought I'd be able to do that. And, I feel so good." They were tears of joy, accomplishment, and pride. I almost had to fight back my own tears. That also may have been because this "client" was my 14-year old daughter. Not sure who was more proud—RunnerDude the Dad or RunnerDude the Coach.
-
I remember after finishing my very first marathon, being so filled with emotion, that I began to cry. I had no control over it. It just poured out. I was so proud of what I had accomplished that the emotions just took over. I'll never forget that moment. A light turned on that day and I realized I could do just about anything, if I tried hard enough. I've run 9 more marathons since then, but I've not had the emotions take over like that first race. I think it's something about accomplishing what seems like the impossible for the very first time that's a very special thing. Yesterday was my daughter's "Ah-Ha Moment" and it was special to be a part of it.
Posted by RunnerDude at Wednesday, May 05, 2010

first!
congratulations to you for being able to be there for her 'ah-ha' moment. how delightful for both a Dad and a Coach. when i was her age, my Dad started coaching me in marksmanship. I went on to win a few state titles and competed in 2 Jr. Olympics. I am sure that he felt the same way that you do, but has never told me so. My advice to you, even though you didn't ask and I am sure you don't need it, is to be sure to tell her how proud you are. not just once. whenever you feel it. ok, now i gotta go find some kleenex.
keep up the great work!

Thanks for choking me up dude! Now I can't see to read through the tears dang it....no seriously, congrats you you and your daughter. Those moments are beautiful indeed and I had forgotten about them. Thanks for the reminder.

Awww wow that almost made me cry. That really is inspiring. I tell you having a positive father figure in your life as a girl is one of the best things you can have. Great job!

Awesome post. It's great to see people have that moment. Almost as cool as having one yourself -

Love this post. Thank you. Happy I found your blog. :)

What a wonderful moment that must have been! Congrats to your daughter!

The great thing about ah-ha moments in running is there can be so many of them and it never gets old realizing new things. Congrats to your daughter!

Thanks to everyone for the awesome comments! Lots of new people to the blog too! Welcome!!!!!

Great post today. I am so happy that your daughter had such a great first experience.

I've had a couple of these moments so far in life and they are truly amazing. It's almost like being zapped with a mini-miracle. I can't get enough of these and I hope I get many more. When I feel like I'm wandering around in the dark for some reason, I know I'm about due for an "ah-ha" moment. What a wonderful post, congrats on being there with - and for - your daughter and being able to share the moment with her (and us)!

You've got to love the ah-ha's! They outweigh and outlast everything else.
And, you got to see one with your daughter. Now, that's special.

Wow thanks for sharing, what a special moment you were able to share with your daughter. My dad recently took up running and being able to share it with him is wonderful.

I was way too bonked to cry after my first Marathon.. great post

OMG, in the future please WARN us if you're going to hit us with those tearjerker moments. I am practically sobbing into my coffee. What a special moment for you both.

That's awesome man. More people like you should be in positions like teaching and coaching. Good to see you taking the time to help people grow and build their confidence.

Thad, you just summed up the biggest value I see in running a marathon, or in kids running a 5K: "I realized I could do anything if I tried hard enough."