The Horsefly From Hell 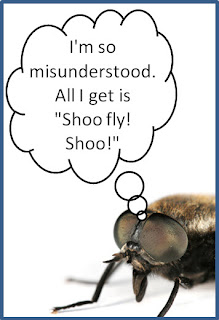 Every year at the beginning of summer, I have the same battle. You'd think I'd learn, but I don't. You see for the past, oh 7 or 8 years, on the first hot and humid day of the year, I get attacked by a horsefly on the same stretch of the greenway on my regular running route. I'm convinced that I must have accidentally stepped on and squished the matriarch or patriarch of this particular lineage of horsefly some time back. It must have been something horrific, because each year the newest horsefly in the "get RunnerDude lineage" of this particular horsefly family is schooled in the fine art of dive-bombing me.

The stretch of greenway in question is about 1-mile long. Before this stretch....no horsefly. After the stretch....no horsefly. But while on that particular stretch, it's horsefly hell. Problem is, this route is an out-and-back. I have to endure a second attack on the return. It's a good thing that this stretch is in an isolated area surrounded by woods, because if you saw me from afar, you might mistake me for a loony bin escapee, with my arms flailing around in the air, my hands whacking at my head, my back, my shoulders. I'm also cursing up a blue moon at what appears to be nothing.
Believe me though, that nothing is something, and that something is relentless. You see, I'm already a bit paranoid when it comes to nature. In addition to this kamikaze horsefly, I've also been stung in the roof of my mouth by a bee while running. I've had an encounter with a rabid coyote. I've run by a bull on the loose. Almost been plowed down by a herd of dear. Dive-bombed by a mocking bird. Had a stand-off with a couple of raccoons. Tripped over a squirrel. Had to jump over a copperhead snake, and, oh yes....been attacked (almost knocked over) by a Canadian goose while in flight.
It's almost become a rite of passage into summer. Usually it's the reminder I need to spray my head, neck, and back with insect repellent. But, that's only a temporary fix. I'd really like to know why this horsefly has such a huge chip on it's shoulder. I'm willing to meet halfway. If only he'd share with me the error of my ways, I'd be willing to make amends. I'm confident we could work through this. Or, maybe if paint myself in iridescent paint, don a huge pair of wings and buzzzz as I run through this section of greenway, it will allow me buzz-free passage.
Posted by RunnerDude at Sunday, May 09, 2010

I must agree, horseflies can be a serious detriment to a good run! My husband and I used to run together a lot pre-kids, and they used to really go for him, for some reason, which worked for me! I always wear a hat, so I think that helps me a bit.

I feed mosquitoes. They sucked my blood dry when I run outside.

I had to change my sunscreen so I wouldn't be attacked by bees! Good luck with nature :)

It's possible that the mockingbird saw the horsefly and only wanted some dinner!

Hey Steve! I think you're on to something! LOL!

The only thing I hate about running is running when there are bugs - of any kind. I try to avoid running at dusk when they seem to be out for their own evening runs.

You need to go Zen about it. The horsefly is there to encourage you to run faster. (Unless you have a chance to take the little sucker out. Then go for it.)

That's pretty freaking hillariousl. I'm sure it's much more fun reading about your trials than experiencing them, but it is funny nonetheless ;)