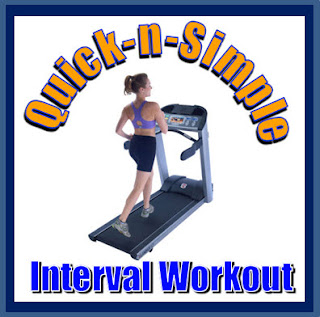 Basically all you need is a series of slow and fast intervals. These intervals can be based on time or distance. For example you can run at a moderate pace for 4 minutes and then run fast (just below your 5K pace) for 1 minute. Or if you'd prefer to base the intervals on distance, try running a quarter mile at a moderate pace and then run a quarter mile at a fast pace. The key is to repeat this series of slow/fast intervals for at least 30 minutes.

Incorporate this workout once a week into your running routine and you'll see improved muscular endurance, improved VO2, improved speed, and overall better running efficiency.
-
For a recap of the workout, check out the following video clip from RunnerDude's Fitness.

Hey Steven!
That's awesome man! Sounds like you're well on your way to that 13:30!! Keep me posted.

Runner Dude - From your treadmill video it's clear that you're a heel striker :-(

Don't feel bad, as 80% of all runners heel strike. If it's any consolation wearing "traditional" running shoes with excessively large heels it's hard not to. If you're interested in transitioning to more of a mid-foot landing try a minimalist running shoe (e.g. Newtons or Nike Free). A great video showing proper technique can be seen here: http://www.youtube.com/watch?v=Gty7rFrsnBg&feature=player_embedded (while it was developed to demonstrate use of the Newton running shoes the advice is universally applicable).

Hi Mark! You're funny. Must be the shoes, cause I'm a mid-foot runner. Sometimes I use forefoot and midfoot for the same foot strike. No, I'm not an extremem forefoot striker, but I am a mid foot striker and not a heel striker. Nice to know that my feet get that much attention though. LOL! This video shows that I'm definitely not doing the heel striking shown and definitely more inline with the mid- to fore-foot strike shown. http://www.youtube.com/watch?v=XrOgDCZ4GUo Nice pitch for Norton and Nike, though. LOL! Very famliar with both.(i.e. http://ncrunnerdude.blogspot.com/2009/04/conscious-running.html ) My barefoot runner friend, Josh, says it's better to skip the minimalist shoes and just ease into barefoot running by barefoot running.