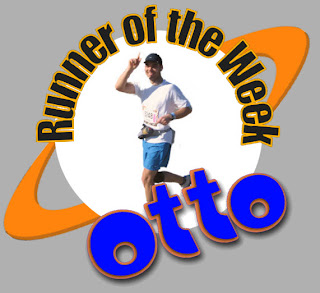 Welcome to the new weekly feature on RunnerDude's Blog—RunnerDude's Runner of the Week. From all over the US and the world, everyday runners just like you and me will be featured on the blog. Here's a big welcome to our first featured runner, Otto!
Featured Runner: Otto Voss
RD:Where are you from?
Otto: I live in Monterrey, the capital of the State of Nuevo Leon, in México. I was born in Guadalajara, but I have been living in Monterrey for the last 13 years.3.
RD: Share a little about yourself.
Otto: I'm a software engineer working for a big Indian company (yes, engineers do exercise ☺). I'm single and I live with my parents and siblings.
RD: How long have you been running?
Otto: It's been two years now since I really started running.
RD: What got you into running?
Otto: After a break-up with a former girlfriend, I found myself without real hobbies and past-times. Nothing that I did really defined me, so I suffered a little depression. A couple of years before this, I tried to train for a 10K here in Monterrey, and I injured myself, mainly because I did not train correctly and because I had 2 hernias in my back, and I didn't take precautions. So, this time, I thought that I should give running and fitness a try again, so I started loosing weight and running without any specific training. Some mont 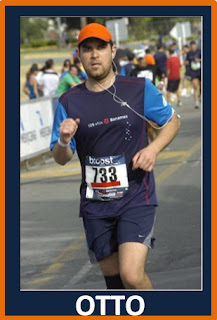 hs after, my ex-girlfriend and I came back together one more time, and because her father was a marathon runner, we picked running as a common activity to share. That's how I got into my first 5K, and later, the 10K I was training for when I injured my back. I got hooked into running after finishing these 2 races.
RD: What do you enjoy most about running?
Otto: It can sound corny, but running really clears my mind. After all the endorphins generated by a run, problems don't seam too impossible to solve. From being a guy without real hobbies, now, I really enjoy calling myself a runner. Running defines a part of whom I am, and people identify me thanks to this.
RD: What’s the funniest or oddest thing that’s happened to you while on a run?
Otto: It's really weird that I usually find the same people in the street (I'm running and they in their cars) in the same spot but at different hours of the day. Morning runs or afternoon runs, it doesn't matter, they seem to fing me running in the same spot. It's like they are waiting for me to go out for a run to pass. Another funny thing is that I have formed a really great group of runner dudes thanks to Twitter and Nike+. We trained together for the Monterrey Marathon. Social Networking really helps!
RD: What’s your biggest running accomplishment? Why?
Otto: Running the Monterrey Marathon 2009 this past December. 42.195 kms is an experience that I won't ever forget. It makes me aware that 42 Kms is not THAT far after all. I can do it!
RD: Do you have a favorite brand of running shoe? Which model? Why?
Otto: I usually go for Nike's. Currently I'm running with LunarGlide+ and I really like them. Maybe, they are a little soft for my taste. The main reason is thanks to the Nike+ system. This little gadget makes me aware of how much I've run. It's addictive.
RD: What’s your favorite race distance?
Otto: I really enjoy 10Ks, and I run these more than any other race. But I would like to specialize for the Half-Marathon. It's the perfect distance for me. Speed and endurance. Monterrey is full of races, almost every weekend, really! 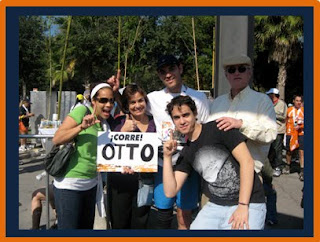 RD: If you were speaking to a group of non-runners or runner wannabes and trying to encourage them to run, what would you say?
Otto: Running is perhaps the cheapest psychiatrist that you would ever find. If you want to feel good with yourself, physically and emotionally, running is one of the best ways to go. Try one organized 5K or 10K, and the energy that all the participants emanate, will make it impossible for you to leave this amazing sport.
RD: Share anything you‘d like about your running experiences, past accomplishments, goals, dreams….anything you haven’t previously shared.
Otto: I really like running for lots of reasons. One is that it keeps you motivated because there are always new challenges waiting when you conquer one. First, you run a 5K, then a 10K, later half-marathon, and before you notice, you are training for a Marathon. 2009 was the year of my first half and complete marathon, so 2010 has to be even better. On April I'm planning to do my first Olympic Triathlon (1.5k swim/40k bike/15k run) and improve my PR in the Marathon. Running really is a spiritual thing to me and thanks to running, I feel like a defined man.
Thanks Otto!
If you'd like to be featured as a weekly runner or you know of someone that would make a good candidate, email me at runnerdudeblog@yahoo.com.
Happy Running!
RunnerDude
Posted by RunnerDude at Sunday, January 31, 2010

I love runner profiles. The engineer comment -- "(yes, engineers do exercise)" -- cracked me up! I'm married to one. He doesn't do much working out. Maybe if he could take his laptop!

I think this kind of articles are a good idea to get other people, common people into running and exercise. Thanks to Otto for sharing so many intimate things and how running can help

Hey Kerrie! You chould get you husband to read Otto's interview! LOL! Maybe he'll get inspired!

Hi Guillermo! Welcome to the blog! I agree! Celebrating the everday runner is extremely motivating to so many.

"Running is perhaps the cheapest psychiatrist that you would ever find."
Says it all! Nice profile.

This is a great feature! can't wait to meet more runners.

Thanks Adam! I'm looking forward to learning about all the featured runners too!