Is a Slower Start the Best Start? 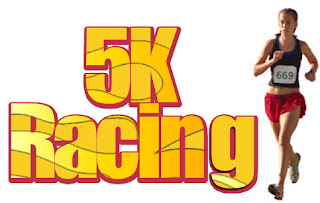 Recently at the USA-Track & Field Level 1 Coaching training weekend I attended in Charlotte, NC, the instructor mentioned a research study that kind of goes against the grain of what most runners think about when racing a 5K. Usually a runner starts off a little more reserved, builds up his/her momentum, and then blows it out at the end of the race. Of course a 5K start is usually faster than a 10K and a 10K's start is faster than a Half, and so on, but within a given race, you're usually encouraged to start off at a slower pace in order to save some for the finish.

The study mentioned by the instructor showed that a faster start can reap a better race time. So what gives? Well, of course I had to dig up the study and see what the scoop was all about. The study was done in 2006 by researchers at the University of New Hampshire. Their goal was to examine how different pacing strategies would effect performance in a 5K race. Researchers worked with 11 runners from New Hampshire's women's cross-country team. The runners in the selected group were similar in that they all logged about 35 miles per week and their 5K PRs were in similar ranges (18-21 minutes).
The study began with establishing a baseline pace by having each runner run two 5Ks. Next, the runners ran three more 5Ks each one with a different pace strategy. Each runner ran the first mile of the first 5K at their established baseline 5K pace and then miles 2 and 3 were run at a pace of the runner's choosing in order to finish as fast as possible. The second 5K was run in a similar fashion, but the first mile was run at a pace 3% faster than the baseline base. The first mile of the 3rd race was run as a pace 6% faster than the baseline pace.
The results? Eight of the 11 women achieved their fastest time running at the 6%-faster-than-baseline pace during the first mile. The remaining three women ran their fastest time at the 3%-faster start pace. None of the runners ran their fastest race using the baseline pace. Most of the runners who tried to continue with an increased pace did slow their pace some at the end of the race, but they still ended with PR times. When running the slower start, most of the runners kept an increased or even pace going through the end of the race, but it wasn't enough to overcome the slower start and failed to produce any PRs.
So what does it mean? Well, the researchers were surprised by the results. They discovered that the slower start had runners running at only 78% of their VO2Max. The faster starts had runners running at 82-83% of their VO2Max. The higher VO2Max is in the range typically achieved by experienced runners running a 5k. The researchers netted out that less-experienced (beginner and recreational) runners probably should not increase their start speed, because they have not yet conditioned their bodies to the faster speed and may not have the ability to keep or increase the pace throughout the remainder of the race and their times may suffer. On the flip side, elite runners shouldn't change what they're doing, because they're already running that first mile in the higher VO2Max ranges.
So, who's to benefit? The more moderately-trained runner may benefit from a faster start. They're probably underestimating what they're capable of doing. Researchers also, reinforced that their study was based on a 5K. So, starting out with a 3% or 6% faster pace in a longer race such as a half or full marathon, may not have comparative results since you have so much further to run after that first mile.
Runningplanet.com has put together a great chart showing how various types of runners may approach that first mile in a 5K. [Click here] to get more information on the pacing strategies listed in the chart.

So, if you're a moderate runner and you can't seem to break your current 5K time, try uping the ante in that first mile by increasing your start pace by 3% or 6% and see if it improves your results.
Posted by RunnerDude at Wednesday, January 13, 2010

Things that make you go "huh"

Yep. My theory is...what ever works for you is what works. LOL! Good to hear different theories though and use bits and pieces to craft your own.

Great when they bust old theories...
Interesting though, could definitely be a way to beat a stubborn time!

I can't wait to try this out at my next 5K race! Thanks for sharing.

Starting fast at a 5k is probably a tatic used more by elite runners. I guess for the majority of the mid pack runners there is a mental block to setting of too fast in case you blow it and feel like a fool for not finishing. In large races of course you have little choice but to run at the pace of those around you unless you chose to swere in and out of other runners.

Having said all this I am sure if you are in a rut and can't improve your 5k times then this must be worth a try.

Hi Sideofsneakers.com! Welcome to the blog! Let me know if you try it and how it works!

Hi Tony! Let me know if you try it!

Hi buryblue! Welcome to the blog! Yep, the researches said that the elite probably already use the technique. The guy doing the USA-TF seminar said another reason it probably works for midpakers is that in a race you can often do a lot more than at any other time. May just sheerly be due to the adrenline rush and the competitive aspect of racing and beating the guy (or gal) in front of you. Although, keep in mind that it's only a 3% to 6% increase, so you can still go out way too fast and crash, as many newbies do. Thanks for the input! Great insight!

Interesting. When I saw the studies results the first thing that came to mind is that these runners are underestimating their speed. Great post :)

I have had very good results with this over the past couple of years in 5ks. I pretty much go blowing off the start line and try to hang on. I've gotten my pr and faster finish times than I thought possible for me. The key I think, is it's a short race.

Hi unathletic runner! Thanks! Yep, I think there are probably several factors contributing to the increased speed/PR.

Hi Teamarcia! Think you hit the nail on the head...it is a short race.

Very interesting post! Honestly, it doesn't surprise me in the least. But it's nice to know that serious empirical research has confirmed something I've been thinking.

Of my four or five best recent 5K times, I did at least three of them by getting drawn into a faster-than-planned pace by runners who are just a little bit faster than me. In all those cases, I just wanted to see how long I could hang with some of the local hot shots in my AG. And in all three cases, the hot shot in question dropped me like a bad habit when he kicked into high gear after the two-mile mark. But when that happens, I almost always end up holding on for a fast (for me!) time.

Now that I've read this, I'll start doing it on purpose!

I tried going out fast all last year and it did not work so well for me. I finally tried for a more even pace and a kick at the end and got a new PB on my last 5k. I worked on keeping the pace on my track workouts and it really paid off. I was not even winded at the end of the race so I know I can adjust the pace and get an even better time.

Very interesting. My friend is coaching me now and I have my first 5K in March...I wonder how I should go out. See what he says!

Hi Maureen! Congrats on the upcoming 5K!! Check the chart and see what it suggests and share that with your trainer. For a firt 5K it may be best to have a slower start or an even-paced run.

Hum...interesting. I suck a lung up by the end of a 5K race because I always take off too fast and doing a death march worse than any in a marathon (thankfully, though, it's not for 4 miles like a marathon). I don't run a lot of 5K's but when I do, I always swear I'm going to take off slower so I don't crash but I always wondered how much to slow it down. Good to know that lung-sucking is just part of the program!