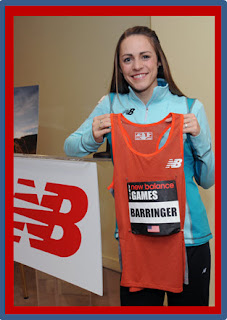 Global athletic leader New Balance announced today the signing of Olympian and American record holder Jenny Barringer to a multi-year endorsement contract. Barringer, who just graduated from the University of Colorado in December, owns the American record in the 3,000-meter steeplechase at 9:12.50. She has proven that she is one of the best athletes in the world, earning a spot on the U.S. Olympic Team, two world teams, and is a seven-time All-American and 12-time All-Big 12 honoree. Jenny also won four NCAA titles and two national steeplechase titles.

“I’m thrilled to join the New Balance family and am eager to represent a brand that I find both inspiring and authentic,” said Barringer. “Given their quality products, support of charitable programs, and commitment to domestic manufacturing, I feel that New Balance and I are a great fit. I’m particularly excited to work with the Girls on the Run® organization, encouraging young girls to respect themselves and develop a healthy lifestyle through running.”

“Jenny’s accomplishments as an athlete make her a great brand ambassador for New Balance,” says Tom Carleo, GM of running at New Balance. “But it is her sincere passion and energy to give back to the community through organizations like Girls on the Run® that inspires the entire company and make her such a natural member of the New Balance family.”

For the past four years Barringer has been coached by Mark Wetmore who is currently in his 12th coaching season at the University of Colorado. Barringer will continue to train with Wetmore and live in Boulder, CO with her fiancé, Jason Simpson.

Track and Field Videos on Flotrack
New Balance, headquartered in Boston, MA has the following mission: Demonstrating responsible leadership, we build global brands that athletes are proud to wear, associates are proud to create and communities are proud to host. New Balance employs more than 4,000 people around the globe, and in 2008 reported worldwide sales of $1.64 billion. For more information please visit www.newbalance.com.

A great runner and a great company. I'm a fan of both.