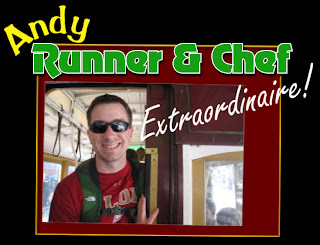 One of the best things about running is all the people you meet along the way. One such person for me is Andy Manry. Several years ago, I was at the turnaround point of my weekly long run with my running buddies. We were all standing around Gu-ing up and downing some water that one of the guys had stashed, when this young guy pulled up in his mini-van, hopped out, and headed out on his run. Didn't really think much about it. We downed our water and headed out on the back-half of our run.
Sometimes on the back-half, I'll pick it up a little. Something about finishing faster on the second leg of a long run makes you feel stronger. It was one of those kinds of days. So, I pulled ahead of my group a little. I noticed that young guy that had started out just before us. He was running alone. Watching him run, I thought of one of my running buddies, Rick King. When I first moved to Greensboro, he invited me to join his group on their weekly long run. I did and most weekends ever since, I've been running with the same bunch. It's a great bunch of runners and we've expanded in size over the years many from group members inviting others to join in the merriment. So, looking at this guy ahead of me, I decided to pick up the pace and see if he was a talker. Luckily he was. We had a great conversation. Come to find out, he was basically running the same route we were, but in reverse. So, I told him about our group (The BlueLiners) and that we met every Saturday morning at 7:30AM at the park for our weekly long run. Told him to join us any time. Well, sure enough, the next Saturday, he (Andy) showed up. Andy's really grown stronger as a runner and it's been cool seeing him progress and get faster.
Not only is Andy a great runner, he's a great family man and cook! Andy loves testing out new dishes as well as creating his own. He's started a great new blog called What's Andy Cooking? Andy's really outdone himself with the blog. The recipes are great. He's a budding photographer too! Looking at the mouth-watering photographs is a treat in itself. Be sure to check out the blog and some of his recipes such as Real Maryland Crab Cakes, Homemade Bagels, and Turkey Meatballs. YUM!!

I asked Andy if he'd share a recipe good for runners and he's come through with an awesome dish. I've made this dish and it was a hit with the whole family!! Read on to find out how to make Andy's Rotisserie Chicken Chili. 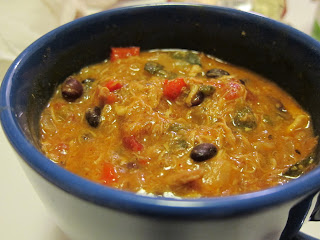 I am training for a marathon right now. That is not unusual, as I have run 4 marathons in the past 5 years. What is unusual is that I am training in the winter months. I usually sweat out my training in the hot, muggy, disgusting North Carolina summer heat. This year, I decided to train for a spring marathon, which places most of my training in the winter. I have come to the conclusion that I am a much better cold weather runner. Everything from my long runs to my tempo runs have been faster and easier in the cold. Even though I run better in the cold winter months, it doesn't mean that I don't physically get cold! There's nothing better after a long 20-mile run in the cold than a warm cup of this chicken chili!

This chili is low in fat, high in protein and super high in flavor! The poblano peppers provide just the right amount of heat and the chicken, beer, bean combo has all the trappings of a perfect post run recovery meal. It's also perfect for tailgating, camping, or any party or get together. I have actually made this for a teacher appreciation day at my kids school for the last two years. The first year I made this, someone offered to buy the leftovers! That's the ultimate complement! My Dad turned me on to this recipe and I believe it's based on a Southern Living recipe.
Ingredients: 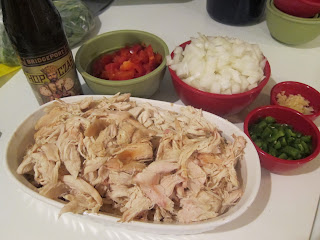 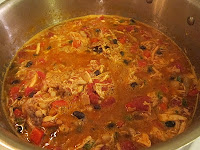 In a large heavy pot, heat the olive oil over medium-high heat until shimmering. Add the onion, garlic, bell pepper and poblano peppers and saute until translucent, stirring often. You want the veggies to sweat just like you did during your run today. 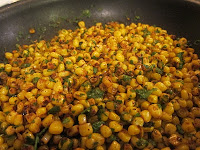 ﻿Now add the tomatoes, beer, navy beans, black beans, chili mix, and chicken. Bring to a boil. Reduce the heat to low and simmer for an hour or more until your ready to eat. If you are going to simmer for more than one hour, cover the pot after 30 minutes. 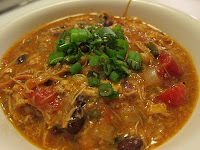 When you serve this, you can top the chili with your favorite chili toppings or simply leave it plain. My favorite is roasted corn, lime, cilantro mixture. To cook this, add 1 tablespoon of olive oil to a non-stick pan over medium high heat. Add two cups of frozen corn to the pan. Cook the corn until it begins to sightly blacken. Sprinkle with a little chili powder, cumin, chopped fresh cilantro, salt and pepper. Squeeze the juice of two limes into the corn mixture, mix and remove from the heat. Some other popular toppings are chopped green onions, sour cream and cheese. Enjoy!
Thanks, Andy!
Posted by RunnerDude at Tuesday, February 15, 2011

I didn't know you were responsible for bringing Andy to the Blueline. The things you learn!

Hey Julie! Let me know if you try it! It's really good.

Hey Dena! Yep, I extended the invite. I do good every now and again. :-)

I forgot to mention that the Poblano pepper, should be seeded and chopped! Thanks for the guest spot RunnerDude!

Hey Andy! You told me that and I forgot to add it. It's added now. Thanks!

Looks great. I'll probably try it this weekend. I usually pick up a rotisserie chicken at Sam's Club every few days as it is! Thanks.

You're both lucky to find each other. That dish certainly looks awesome! Gotta have my wife prepare one for us tomorrow evening.

I made it today for Michael and I ... delicious! Thanks!