Runner of the Week: Dean 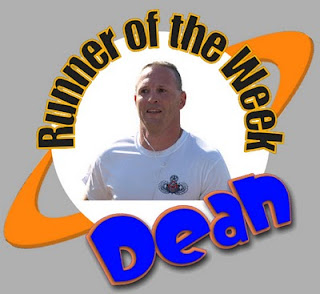 Just recently I received an email from Dean Akers who's an active duty chaplain at Ft. Bragg, NC. He had read my article in Guideposts. He too is a runner and has ulcerative colitis. Dean was diagnosed with UC around the same time I was. Dean shared how he had recently gotten back into running after three years of not being able to run due to some ankle surgeries. He ran his first marathon in Iraq last year and has kept running since getting home in October. He runs about 30 miles a week. I've met many people with UC, but very few that run, so I had to contact, Dean and see if he'd share his story. Read on to find out more about Dean and his running.

I was one of the fastest kids in my high school but that was sprinting. I was never a distance runner. Even when I entered The Citadel I never ran further than two miles. I only ran two miles because I had to as an Army ROTC student at The Citadel. It stayed this way for a LONG time until I entered Active Duty in 2005 as an Army chaplain.

Shortly after beginning my active duty career I twisted my ankle on a road march. (A road march is simply speed walking with a 50 pound backpack.) I continued to run my normal two miles but now I was in pain after running about a mile. I continued to tough it out because that is what we do as soldiers. Finally, I went to have it checked out and of course I had done more damage to my ankle. I had surgery and was told that I no longer would run the 2 miles for the Army’s Physical Fitness Test. I began to bike and still did some shorter distances running.

In 2008, I entered a special residency as a chaplain at Brooke Army Medical Center. My ankle was still giving me problems so I went once again to have it checked. And again, I underwent surgery on my ankle. This time a piece of bone the size of a dime was taken out. It had been “floating” in there. The damage this time was that I had little splinters all over now. I was told by my physical therapist “that if it was his ankle he'd never run on it again.”

I deployed to Iraq in October 2009 as a chaplain with a Combat Support Hospital. I weighed 180 pounds. While in Iraq, I began to biking. I built up to 14 miles on a stationary bike. Then I began to use the elliptical. I built up to 12 miles on the elliptical and then I began to get brave and I once again started running. While I was traveling checking on soldiers, I visited with an old friend, my physical therapist. I told him that I had begun running again. He and I went on a three mile run! 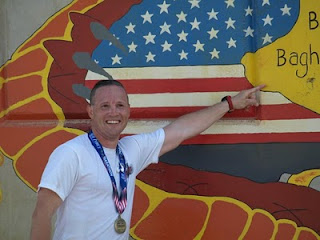 Running once again had become my passion. I heard about the Air Force Half and Full Marathon at deployed locations and thought it would be neat to run a Half Marathon. I even put together a God Squad running group together to help me stay accountable. As I began training, a couple of the soldiers talked me into training for the full instead of the half. In September 2009 I ran my first marathon in Baghdad, Iraq.
This was a HUGH accomplishment for me not only because of my ankle but also because diagnosed with Ulcerative Colitis (UC) in 2002. I finished my marathon but I had some issues along the way. I am blessed that I had a running partner that understood my issues and ran the whole race with me. He is an Ultra-marathoner and it meant the world to me that he did not worry about his time but ensuring that I finished. I did some 4 hours, 20 minutes, and 56 seconds later.
No matter where you are in your running…you can succeed. I am thankful to God for allowing me the opportunity to complete my first marathon and continuing to run since returning home. I am still running 25-35 miles a week. There are days, unfortunately, that I do not get as far as I plan due to my UC but then there are days that I go further.
Posted by RunnerDude at Sunday, February 13, 2011

What a great story!

What a GREAT and inspiring story! I love the fact that, to paraphrase, sometimes Dean does not run the distance planned, but then sometimes HE "RUNS MORE." Dean's blog speaks to all ages and all levels. All the best to this faithful, courageous and tenacious fellow.

Thanks Runner "Dude Dean". What a great story and thanks so much for sharing with us!!
Sincerely,
Ron Coyle