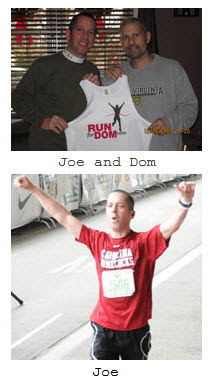 Yesterday I posted the first half of an interview that Lara from Saturday Morning Zen conducted with Joe, the amazing marathoner and blogger who is running two marathons in thirteen days as a cancer fundraiser for his friend Dom. This is the second half of the interview. When you’re done reading, please consider clicking over to Run For Dom and donate by sponsoring a mile of one or both of Joe’s marathons.