Egg on My Face 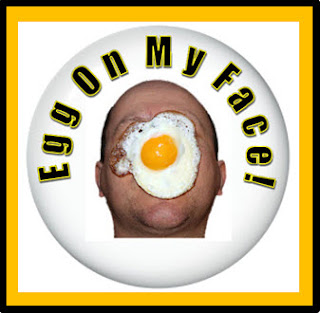 The other day, I was at the grocery store with my 9-year-old daughter. We were in the dairy section trying to find a dozen "crack-free" eggs. (No, not looking for eggs from chickens in rehab, just looking for eggs without cracks in them.) After looking through the 5th box, my daughter said, "Dad, what are these?" She was pointing to a carton of brown eggs. I just told her what my dad always told me, "Oh those are farm eggs." Then she asked, "Why are they brown? Are they any different than the white ones?" Without much thought, I responded, "No, honey, they're the same, one's just brown and one's white." Luckily that must have sufficed, because she then moved on to asking about Greek yogurt. I was glad, because, in that brief conversation, I realized that I really didn't know much about brown eggs or if there really was any difference from the more common white variety.

Well, you know me, when I got home, I started digging. Come to find out, there was some truth to what my Dad had told me. Basically white eggs come from white chickens and brown eggs come from brown-ish chickens. Most of the companies that mass produce eggs use white chickens (the White Leghorn). Most small or local farms use brown-ish hens (Rhode Island Red, New Hampshire and Plymouth Rock chickens) which lay brown or brown-speckled eggs.

Then I discovered another interesting fact. Some chickens have a coloring that may make it hard to determine (just by looking at them) what color egg they'll lay. So how do you tell? You look at their earlobes! Yep, their earlobes. According to MrBreakfast.com, "the pigments in the outer layer of the eggshell will always approximate the color of the earlobe of the chicken that laid the egg." So, you're probably thinking, "Where is a chicken's earlobe?" So did I. Well, basically they're not lobes in the same sense as a human earlobe. A chicken's earlobe is the area on each side of the chicken's face. If that area is white, then most likely that chicken will lay white eggs. Who'd a thunk?!!

Let me guess. The next question rolling around in your head is probably, "Is one color more nutritious than another?" Good question. According to the Egg Nutrition Center in Washington, D.C., there is no difference. The nutrition chart they provide doesn't distinguish between white and brown. There does seem to be some controversy over this, however. Some groups propose that brown eggs are more nutritious. In the March, 2010 issue of Prevention, the article " 50 Healthiest Everyday Foods" states that "pasture-raised eggs may have 35% less sat fat, 60% more vitamin A, and 200% more omega-3s." This factoid shows a brown egg labeled as "Pasture-raised." I guess that's because more small farms who may be into producing "pasture-raised eggs" use hens that produce brown eggs. If there is a difference in nutrition, I'm thinking it probably has more to do with how the chickens are raised and what they're fed not the color of the egg (just my editorial).
Regardless of whether you eat brown or white, eggs are a great source of high quality complete protein. Great for runners since protein helps with muscle repair. For many years there's been concern over eggs, cholesterol, and heart disease. The Egg Nutrition Center in Washington, D.C. states that "30 years of research has never linked egg consumption to heart disease." They go further saying, "A 2007 study of 9,500 people reported in Medical Science Monitor showed that eating one or more eggs a day did not increase the risk of heart disease or stroke among healthy adults, and that eating eggs may be associated with a decrease in blood pressure. Also in 2007, researchers showed that egg consumption contributed less than 1 percent of the risk for heart disease when other risk factors were taken into account. The researchers concluded that broad recommendations to limit egg consumption may be misguided, particularly when eggs' nutritional contributions are considered."
And get this..."Not only have decades of research shown no association between egg intake and heart disease risk, but eggs are an excellent source of choline, which plays an important role in breaking down homocysteine, an amino acid in the blood that may be associated with an increased risk of heart disease."
So, now you know all there is to know about white eggs, brown eggs, and their nutrition. And, as a bonus you learned that chickens have earlobes. I don't know about you, but my day is complete!
Posted by RunnerDude at Friday, March 12, 2010

I walk to my neighbor's to get eggs and the dozen usually has some brown, some white, some tan, some aqua. It is a very diverse group but the eggs are absolutely wonderful. A much more yellow yolk than a store egg.

No kidding - I'd buy aqua eggs for my kids in a heartbeat.

What an odd week. I've gone my entire life knowing nothing about chickens. After reading about chicken sexing (disgusting) in the Economist ( http://www.economist.com/science-technology/technology-monitor/displaystory.cfm?story_id=15491505 ), I now have just watched a chicken running video.

Hey Mike! Man, you have had one interesting week! Not sure how you'll top it next week! LOL!! Have a great weekend!

Hoping to follow it up with a study of local ruminants. :)

Seriously, the brown egg/nutrition thing makes sense. I'm eager to someday roadtrip down by you and get supposedly extra-tasty, delicious eggs from http://www.polyfacefarms.com/ The story is since these hens eat lots of bugs, they are a lot "eggier".

Hey Mike! Well, now you've learned me sumthin! I had to look up "ruminants." Guess now I have to find out if white cows make white milk and brown cows make chocolate milk? Are there pink cows? LOL!!

We can now call you Mr. Runner Perdue. I always buy brown, but that's b/c I always look for either free-range or organic eggs. A friend who is a nutritionist agrees with the study you cited that these types tend to be more nutritious. I don't see any difference in taste, but I have friends who swear the organic ones are more flavorful. Who knows?

OMG BEST POST EVER. This is even better than your interview of me.

We have two chickens. Lunch (that's her name) lays bluish-green eggs, Tootie lays brownish-pink. Let me know if you want some.

And as fellow bipedal runners, chickens have a lot to teach about smooth form. Yes, I'm totally serious. My chickens taught me how to run. I run... like a chicken.

Thad, you're welcome to bring your daughter up to our place so she can see our blue- and brown-egg-laying hens. For a mealworm, Lunch will jump as high as your waist.

You're right about the egg color: It's purely a genetic pigment thing and has no bearing on the quality of the egg. The chicken's diet is what makes a good egg. A clover-rich diet will make yolks crazy orange, btw.

Most of the brown eggs in stores are from Rhode Island Reds. They're egg-laying machines!

Obviously, those chickens perfected their running form by running barefoot.

In terms of eggs, the best eggs come from the barefoot chickens.

Lunch and Tootie! Great names! I had a childhood friend who had a black hen named Booger.LOL! Glad you liked the post. I thought I had seen a picture of you in a chicken coop!

Hey Iris! Thanks for the invite. Might just take you up on the. She'd love to see the jumping hen!

Hey Matt! I think you have a new marketing slant. Forget free-range or pasture-raised...But Barefoot!

If I'm ever in the Cash Cab someday, I'm definitely calling you.

Not quite sure why but I found this to be one of the most facinating things I've read in quite some time!!! I guess I must have some kind of subconsious facination with eggs that you spoke directly to.

someone else posted recently about chicken ear lobes and I did not buy it but now I think I might have to accept that chickens have earlobes. Much as it goes against my better judgement!
I agree with Matt, Barefoot chickens lay the best eggs :)

Your blog is so apropos for my life lately-- my preschooler has been telling me about brown eggs for weeks (& my inlaws always buy brown eggs) and so this very week, to please preschooler, who doesn't eat eggs any more for some unknown reason, I bought brown eggs. I could tell that made my husband very happy. As for me, I love eggs, white or brown. And I'm gonna go for what my doc says, as long as I keep up the running, an egg a day is okay : ) (And once in a blue moon, I have two :)

Nice post! Here in SA we don't get many white eggs. I don't eat many eggs. Maybe once a month or once in two months. I never eat salt with eggs.

That's cool! I never knew all that--and the video was hilarious. I never noticed how funny looking chickens were before!

When I was a kid we had white chickens and they layed brown eggs. If I remember right they were called White Rock chickens. I've never heard the earlobe thing. I just realized that I haven't seen a chicken up close in years!!

Hi Lorenda! Sure those hens werne't bleach blondes? LOL! Actually you're right, White Rock's do lay white eggs. Their bodies are all white, but the earlobe areas not all white. Not really brown, but not white either. Guess that accounts for the brown eggs.

always eat healthy but have healthy cells too www.longlife4you.teamasea.com

I wish I read this yesterday. I used 2 dozen brown eggs this morning for scrambled eggs and it would have made for interesting table-talk. Aqua eggs? Cool!
I wonder if any chickens have pierced ear lobes. Maybe that is what causes some of the cracks in the eggs!(had to write it)

I buy mine at the farmer's market - cage free, roaming, 'organic' (not certified) - they range from tan to pink to blue to green. It gives me a giggle in the morning.