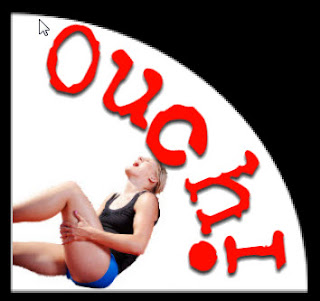 Seems like lately, many of my running buddies, both local and cyber, are being plagued by hamstring injuries. The problem with hamstring injuries, is that they hurt like hell and take a while to heal. Neither does a runner want to deal with. Telling a running not to run for a few weeks, is like taking their first born.

So why are runners (especially long distance runners) plagued by hamstring injuries so often? Well, there can be many causes—going out too fast and too strong without properly warming up, not properly fueling the body, dehydration, lack of strength in the posterior chain (back, glutes, hamstrings), and being quad dominant. And then there is always the odd injury for which there is no apparent reason for the cause.

From my reading, schooling, and talking with other runners, being quad dominant and having a weak posterior chain are probably the two biggest causes of hamstring injuries. I've mentioned it in previous posts how so often runners do not include resistance training into their weekly routine. Runners often shy away from the gym because they feel they're getting enough exercise on the run. They also don't want to bulk up.

Runners need to change their perception of the gym. They also need to realize that many resistance exercises can be done using body weight or light weights at home. And no, doing resistance training will not turn you into a bulky "Arnold" and no you won't gain an Austrian accent in the process.

A December 2008 Running Times article does a great job of explaining the issue of quad dominance. In a nutshell, quad dominance happens when the "quad muscles overpower the action of the hamstrings in the movement of the leg during a running stride."

Long distance runners log a lot of miles. That constant repetitive action puts an overload on the quads causing them to become more dominant than their antagonist—the hamstrings. When your hamstrings become significantly weaker than your quads, then Running Times says one of two things may happen:

1) Your hamstrings will tear as a result of not being able to take the load developed by the contracting quadriceps and momentum from hip extension
2) You will run slower as a result of diminished power from the hip flexors and knee extensors as the hamstrings have to contract earlier to be able to break the ensuing movement.

Hamstring injuries are slow to heal and often, once you get them, they'll reoccur over and over. The recurrence, however, is usually due to the runner not addressing the real cause of the problem......weak hamstrings. That's where resistance training can play a huge role in overcoming or preventing this problem.

First of all, for everyone (not just runners) strengthening the posterior chain (the muscle groups found on the back side of the body) is most beneficial. Having a strong posterior chain can help prevent a whole host of injuries especially later down the road as we age. The posterior chain mainly consists of the erector spinae muscles (the lower back muscles), the glutes (butt muscles), and the hamstrings (upper backside of the leg).

Exercises that target the hamstrings include:

Thank you for clearing this up. I always get confused when it comes to the hamstrings. I always thought of doing squats for the glutes, not then hamstrings. Also, just became a fan on FB!

Hi Keri!Glad I could help! The full range of motion of a squat actually hits the quads, glutes, and hamstrings. Shallow or quarter squats will hit more quad. Also, if you do a squat on a Smith Rack where you're able to place your feet further out in front of you, you'll hit more quad. The way to really hit your hammies and glutes is to get a deeper squat. You really hit the gluts and hammies on your way up from a deep squat. Just make sure your toes aren't beyond your toes when squatting. If they are, try sticking your rump out then squat.

Hey South of the cliff! Yep, deadlifts are an excellent exercise for runners. Anyone for that matter.

Here's a thought: are hamstring injuries more common in faster runners than slower or in men than women (which could also be misinterpreted as speed)? All but one hamstring injuries I've known have been related to male runners.
If I put this together with your info., women's hips are built differently and that could explain the difference.

Hi Cynthia! Great questions! I've not noticed it being more common in males or females. Actully of the three friends currently dealing hammie problems, 2 are female. In my reading, I've never seen anything about speed being a major issue unless it's related to going out too fast too soon or ramping up mileage too soon. I'm sure it can play a part, though. But the biggest reason seems to be more of a muscle imblance issue between the hamstrings and the quads.

Women's hips are definitley built differenlty and that often shows up with Valgus Knee happening when doing squats or lunges. Valgus knee is that inward roll of the arch in the foot or the inward movement of the knee that you see with some people during a squat or lunge. That should be worked on before doing deep squats and espeically squats with weights. But that doesn't seem to be connected to hamstring issues. It's usually more related to ITB issues. Female basketball players have a much higher rate of ITB problems than males due to this issue.

But, I'll keep digging, because there always seems to be new info on running related injuries. You may just be onto something!

Nice post! I'm glad to say I've been injury free for more than 18 months now. I think it's mainly because I run slow. I concentrate on distance and not speed.