WHAM! POW! BANG! Life Sure Can Pack a Punch! 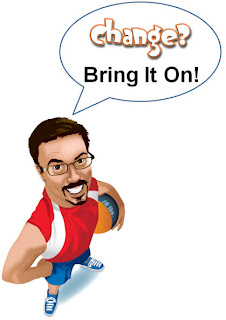 Some of you may be aware that for the past year, I've been on a life-changing journey. A little over a year ago my secure little world was rocked to it's core when I was laid off from my job. Actually it was more than a job. My job as a writer and editor was a career that I thought I'd have for the rest of my life.

Life has a great way of throwing curve balls at you. If things get too comfortable and familiar, that's usually when, WHAM! POW! BANG! You're hit with change. Change can be painful, but I've learned that along with change comes opportunity.
That's exactly what happened to me. The idea of me working as a fitness professional was a daydream I'd often have while running on the treadmill at the gym, watching the personal trainers work with their clients. That dream became a reality when I was forced to redefine myself. I would have never left the security of a job with benefits, but when I had no choice and that security was taken from me, I was able to take a leap of faith and pursue a career in fitness and running. In retrospect I wonder if that had been the "Big Plan" all along.
It's funny how things begin to grow in a particular direction over time without you even being aware of it. I ran my first marathon back in '97. That led to 9 more. A running injury in '06 led me to the gym for low-impact exercise for 3-months during my recovery. That led me into the world of fitness and resistance training. I began RunnerDude's Blog about a year-and-a-half ago. That led to a wonderful readership and the ability to connect with runners and fitness buffs all over the globe. All who have taught me a ton about fitness and running as well as the human spirit. My job layoff in '09 led to the realization that my interest in fitness and running was more than a hobby. That realization led to me going back to school and becoming a certified personal trainer and running coach. Those certifications led to the start of a new business—RunnerDude's Fitness—a personal training studio in Greensboro, NC.
The studio is in it's second month of business and things are moving right along. Now taking the rose-colored glasses off for a second—the path (while very rewarding) hasn't been an easy one. Personal Training school was 6-months of full-time intense hands-on experience and classroom study. And then the really hard stuff started—opening a business. Oh man, there were many a sleepless night. Being totally responsible for every element of opening a business is to say the least, just a tad overwhelming. But once I was open and able to begin practicing my new craft, my wonderful new clients have quickly shown me it was the right decision.
My client base is small right now, but it's growing. I have clients in their 30s to their mid 50's. They each come with a different background, level of fitness, and reason for coming. Their determination to better their health and fitness is truly inspiring. From the 50-year-old lady who's discovered she's stronger than she thinks, to the 30-something father of two who's maintaining a huge weight loss and setting an awesome example for his kids with a healthier lifestyle, to the 40-year-old mother of two boys who's making time for herself to join the beginning running group so she can regain the energy she used to have, to the 40-something-mother who quite smoking 90 days ago and has joined the beginning running group to keep her new positive and healthy lifestyle on track, to the fella in his mid-fifties who wants to become a stronger and faster runner, to the 40-something husband who wants to improve his running form so he can continue to enjoy running triathlons with his wife. All these people and the others I've not mentioned are truly awesome individuals. Chances are I may not have ever met most of these people nor would have had the opportunity to impact their lives in a positive manner, had I not experience some change.
Would I go back to my previous life? Heck no! Am, I still scared of the future? Heck yeah! Am I excited about the future and what lies ahead? ABSOLUTELY!!
Posted by RunnerDude at Saturday, April 10, 2010

That was a great post! Thanks for sharing more of your story. Sounds like you definitely made the right choices! Thanks for your positive and uplifting attitude. Change is good.

Thanks Stacey!!!
Awesome news about your sonsorship!! Congrats!

Whenever something goes awry, I tell myself that things happen for a reason. Your story is proof of that too.

Love this post... I am a firm believer there is a master plan for each of us and it appears yours has found you! Thanks for the inspiration!!

You never know how life is going to go, very happy for you and your new endeavor....good luck!

Hey Cynthia! I like your thinking. Life's way to short to let things get you down.

Hey Go Babbs! Welcome to the blog! Thanks for the support!!

Thanks Molly! And thanks for your support of the blog too!

Thad -
I'm right there with ya, only a year later. I'm still trying to figure out what my Big Plan is, but the vision is coming a little clearer every day. I feel like I'm on a parallel path with you, just 365 days different. This post helped motivate me, so keep it going and bring it home!

Thanks for sharing your story! It is indeed scary to start a new venture (I know, because I co-founded my religious community). I hope you have great success in your new business--and that you keep the awesome blog posts coming because they are part of what your business is all about.

Hey Jeff!! Proud of you man! Definitely think you're on the right track and you'll be an awesome trainer!!

Hey Sister Mary Agnes!! Thanks so much for your comments. Your support means a lot and your own story is very moving and motivational to me as well. Thanks!

I follow a lot of blogs, but I check yours every day. I sure am glad life gave you this opportunity.

I think I know that husband that wants to run....Thad thanks for the encouragment you give to your clients and to your readers! I think your business is going to do great because you care so much! I can't wait to see it grow and to read about the progress and change your making in the community!

Congratulations on all you've accomplished this year!!

"It's funny how things begin to grow in a particular direction over time without you even being aware of it." YES, YES, it ends up really sort of forcing ones hand, doesn't it!

I reckon all the trouble in life comes from not yielding to this force of change and hanging on grimly to what we "know/have."

Sure, it's not easy to change but look at what it can bring! Excellent life in your case "Dude"!

As a teacher and a Father if there is one thing I'd like to get through to the youth I'm in contact with it's that you can never be sure that something bad that happens to you is really a bad thing. It might end up being the best thing in the World. I keep a picture of my first real love in my wallet (yes, a little creepy) it reminds me that even though she was a Brook Shields look a like with a great personality and when she left me I felt like necking myself I didn't and it was this breakup that led 20years later to the family I have now that I'm sure I was suppose to have, and love.

Tough medicine, change, but it sometime can save your life!

First, that's my favorite graphic of you, EVER. Next, everyone in the world should read this post. I can't count how many people I know who said the worst thing that ever happened to them (such as job loss) ended up being the best thing that ever happened to them, because it forced them into a new phase of life. The universe gives us what we asked for. SO PROUD of all you've accomplished this year and looking forward to watching your growing success.

Hey Noah! That means a lot man! Your own story has been a huge inspiration to me as well man!

Hi runrgrl2007! Thanks Amy! Your support and encourgement has helped more than you know. I'm looking forward to working with John!

Hi Heather! Thanks! I've been enjoying your blog! Especially the recipes.

Hi Scott!! Thanks for the support man! I wish I had had some of these realizations earlier in life, but I guess these "growing pains" really make you appreciate what you have later in life.

Hi Dena! Your support, guidance, and friendship has been so so helpful this year. You've been a wonderful sounding board. Back-at-ya with the proudness. You're determination as a runner and your desire to make Boston has been very inspirational! You rock! And you're going to Rock at Boston!
The graphic was done by an artist friend of mine, Nick Greenwood http://www.nick-greenwood.com/. He's an awesome artist.

Thanks for sharing that story! Your determination and hard work will pay off for the rest of your life. You could have taken the easy way and said that life just gave you a bad break, but you took what you know and made something happen to better the lives of others including yours. That you should be proud of. Great Job!

I'm really glad that you have everything up and running!! You should post pictures of the inside or something!

Thanks Adam! Look for the RunnerDude's Fitness Fan Page block on the right-hand side of the page. I have pictures of the studio on the fan page. Let me knw what you think!

AS I lay awake at 4 am last nite I should have realized I would find a n article like this today to encourage me. Thanks for the post, I hve recently found out of my own layoff to a job that I stumbled into because of a leap of faith I made only to find out it fulfilled much of my career aspirations and dreams (Iam am a highschool drug and alcohol counselor!) I am now facing a change again, this article was so encouraging. I also beleive in a God who takes care of me and cares about my needs and desires. WIth His help and the encouragement of this blog, I will find a new route. THanks runnerdude!

Hey Chad! I'm so sorry about the layoff. Think opportunity and something will open for you man, I just know it. I'm thinking about you. Keep me posted!!!!!