The Unsung Hero: The Beginner Runner 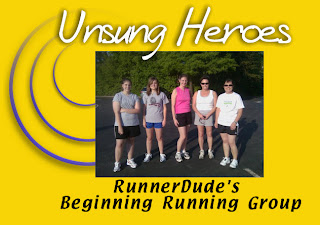 Sometimes it really is easy to forget all that it took to get where you are today. Whether it be growing a family, getting an education, building a career, starting a business, or becoming a runner. Once you get to a certain level of "comfortableness" you often forget all the hard work it took to get there.

The beginning running group that I'm leading at RunnerDude's Fitness has really reminded me of all that it takes to get out and run. The five ladies (ranging in age from 14 to 49) are amazing! Whether you're young and never exercised or "more seasoned" and never exercised it really doesn't matter. In both cases it can be very intimidating. In speaking to each member of the group individually during their fitness assessment, they all shared the same concern, "Can I keep up?" "What if I'm the slowest one?" "Are the other ladies older? younger? fitter?"

When you decide to join a running group or any fitness group for that matter, a person really is taking a big step. It takes a lot of oomph and guts to put yourself out there for all to see. Self-doubt and lack of self-esteem can sometimes overwhelm someone new to fitness.

That's why it's so important to find a supportive group of other beginners or at least in a group where more experienced athletes will be nurturing and supportive of a beginner. This group of ladies are really rocking-it. Once they met and realized they all were truly beginners, they relaxed. They're doing a 10-week run/walk program that will have them running the distance of a 5K by the end of the 10 weeks. We're not working on speed or time. Simply building endurance and confidence. They're gaining tremendously in both areas. We've begun our second week of the program and they've all ready picked up the pace (on their own).

All the ladies have expressed a new sense of pride in what they're accomplishing. Two ladies have reported losing some weight which was a goal of theirs and that's been even more motivating. One of the younger runners is no longer experiencing that mid-run fatigue that sometimes sets in especially with new runners. She's beginning to see that her body really is adapting and becoming conditioned. This group has no whiners. They're talking proudly of the delayed onset muscle soreness as if it were a badge of honor. Last night there was a light rain, I was kind of expecting the group to be a no-show, but to my surprise they appeared and the run took place as normal. That's a runner.

Watching these ladies brought back all that it took me to get into running. I had completely forgotten my "secret runs." As a child, I was overweight and somehow I missed out on the athletic gene. (My brother got a double dose of it.) In 8th grade we had to run the mile as a part of PE. Back then, I wouldn't be caught dead in a pair of shorts. My legs rubbed together and the inseam of the shorts would ride up in the crotch and I just looked goofy. Plus back then, "fat kids" clothes for some reason only came in plaid. So, if you can, picture an overweight non-athletic kid with a mop of brown hair running around the football field in a pair of Sears plaid Toughskins pants. I'm not even sure I had on sneakers. More likely, it was a pair of Wallabees or Earth shoes (remember those?). I was a sight I'm sure. Ran that mile in 18 minutes! I wasn't last though. There was one kid behind me.

Something happened that day. I realized that I could actually run. I was dead, but I actually made it. For a few weeks after that, I went on secret runs. I even bought a pair of "running shoes" from Pic-n-Pay. I think they had plastic uppers. After school, before my brother got home, I'd run in my neighborhood. Ran down Orange Street onto Church Street and back. T-shirt, plaid Toughskins and my Pic-n-Pay best. Probably wasn't more than a mile, but I ran.

That summer after 8th grade, I decided I wanted to lose weight, before going on to 9th grade at the high school. So, my mom and I went on Weight Watchers. I lost a little over 40 lbs that summer. I was plumb skinny by the beginning of school. I got caught up in the weight loss and kind of stopped running, but later that year in 9th grade, I had to run the mile again and this time I ran it in 9:00. I was shocked and amazed. I had cut my time in half!

I ran a little after that, but it never amounted to much. I lacked the confidence to try out for track. (Once a fat kid, always a fat kid). 5Ks and 10Ks really didn't exist back then, or if they did, I didn't know about them. Actually I never knew there was any thing other than team sports. I had watched my brother play baseball, football, basketball, and tennis, so all I knew were team sports. The one thing I knew for sure was I wasn't cut out for competitive team sports. Two years of baseball and 1 year of football, proved that to me.

It wasn't until my freshman year in college that I realized people ran and competed in 5K and 10K races. The cool thing about this new revelation was that the competition was really against yourself. The elites competed against each other, but everyone else ran for fun, fitness, or to compete against themselves. I found my niche.

The courage of the 5 ladies in my beginning running group, helped me remember my roots and really appreciate where I had come from as well as appreciate even more their courage for joining the group and giving it their all. Ladies...you rock!
Posted by RunnerDude at Wednesday, April 21, 2010

You go girls! The benefits you will get are amazing!

I started running just before my 46th birthday about 2.5 years ago. I am now running half marathons - not fast but I am finishing and I love it!

Ahhh, what a sweet post dedicated to your "ladies". I hope they have your blog address so they can read up. Your story is pretty motivational. Way to find your niche and stick too it. Great post!

This is awesome. Keep at it ladies, not all runs will be "good" but, just like in life, the good will outweigh the bad

I was the fat kid all my life and only started running about a year ago - to date I have done a hand full of 5ks and am aiming for a half next year in Florida!!

I continue to struggle with my weight but love the way running makes me feel and love that I am competing with no one but myself!!

What an AWESOME trainer they have -lucky bunch of ladies!

Thank you for all of your blogs!
Danielle

Yes, we need to be reminded how much effort we put in to get to our stage/level of running and appreciate and encourage those that are doing it now and showing us how!

Hi Kiesha! Welcome to the blog!Thanks for the support! Yep, sent the ladies a link to the post.

Thanks Adam! I need to link the group to your How Running Changed my Life post. Great story you have there yourself!

Hi Danielle! Sounds like you're doing great! Stick with it and you'll have the half under your belt for sure!!! Keep me posted on your progress!

Thanks Scott! Hope all is well your way!

This is a great post. The ladies are lucky to be in your group. Running improves every aspect of my life. Good luck to you and the group!

Hi Johann! Thanks! I'm the lucky one.

Love this post :) Thanks for supporting/motivating us newbies. I love the way running makes me feel, but sometimes still feel like I'm the 'fat kid'. Thanks for letting us know that it's all normal, we're not alone! :)

What inspiring stories...yours and theirs!

I work with a group of girls on Sundays and this weekend is their first 5K. I couldn't be more proud so I get you. I'm much more excited to see them finish then for my own PR I'm trying to get.

You go ladies....I started running at 47 and ran my first marathon last Dec.......not real fast but I did it and boy what a great feeling it was. Keep up the great work and dont get mad at Thad when he pushes you hard on a bad day. You WILL thank him when it's over.

Hey MJ! You're definitely not alone. Keep at it! You're awesome!

Hi C.E.E.! Thanks! I know, what you mean. Tonight the ladies were talking about running a 5K at the end of the program. That was so cool.

Hey Kay! Thanks for the support!! Congrats on your running too!

Once a runner, always a runner. So now you've got 'em! I love sharing my enthusiasm and passion with family and friends. I love it even more when someone I know starts running, too. Your ladies rock and so do you!

You go girls! I was never athletic -- big ol' coach potato. I just started running 4 years ago and have been amazed to find I'm actually good at a sport. I hope this leads to a lifelong love of running for your group. They couldn't have a better coach.

Hi SeeGirlRun! I like that..."Once a runner, always a runner." I'll be sure to share that with the group!

Thanks Amy! Hope all is well your way!!

Hey Dena! You're so modest! You're an awesome runner! Everybody....Dena just ran Boston and PR'd for her marathon time with a 3:41!!! You rock Dena!

Starting running is hard - and, so are the first races. It's important to have a support group like yours and experienced runners around that can motivate and guide them.
Great running, ladies.