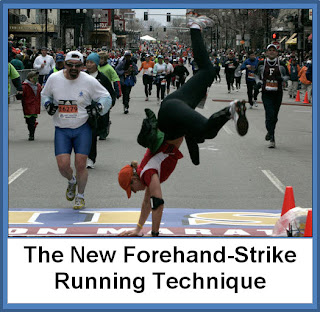 Today I attended a seminar on supplemental training to use when coaching triathletes. The seminar was divided into three parts Yoga, Core/Strength Training, and Running Drills. The sessions were great, especially the yoga session presented by Sage Rountree. But, the last part of the seminar that focused on running left me a little confused at first and then a little amused.

Remember the high waisted jeans with the tight ankles, poofy legs, and zippered pockets of the late 80's and early 90's? Then not long after, the waist seemed to drop below the naughty level for girls while entire boxer-clad bottoms began appearing on the boy's side. I'll never forget the time my little girl told me she saw her teacher's thong when she bent over! I'm hoping that since the older guy that auditioned on American Idol sang his "Pants on the ground. Pants on the ground. Looking like a fool with your pants on the ground." that maybe the tide will turn and maybe just maybe the new fad will be to wear your pants on your hips.
That little rant was to make the point that things come and go. That's kind of the feeling I was getting during the last part of the seminar today. The running instructor was trying to tell us that the newer forms of running (Chi Running, the POSE method, barefoot running, or any method that had "regular runners" trying to run with shorter strides and a mid- to forefoot strike) weren't for everyone and might do more harm than good. He continued to explain that the shorter stride and mid- to forefoot strike was really only accomplished by the fastest elite runners.
At first I was confused, because what I was hearing was contrary to all my recent learning. Then I was amused. Personally, I think the instructor just doesn't like the newer techniques. He seemed a little old school. Don't get me wrong. I respect "old school." But, I believe there's room for newer schools of thought too. I had to dig deep, but what I was eventually able to take away from his session was "If it ain't broke, don't fix it." Now that I can relate to. I'm of the belief that if you like something and it works for you and you're not having injury after injury, then go with it. Some of the best runners (Joan Benoit, Bill Rogers, Paula Radcliffe) have unconventional running gaits. Joan Benoit actually has a forefoot landing on one foot and heel strikes on the other. Go figure. Should someone have tried to "fix" her gait? Why? It worked for her and she's a living running legend!
If barefoot or minimalist-shoe running works for you, heck, then break out those tootsies and hit the road. If shorter strides and forefoot landings work for you, then get those legs of yours spinning like the Roadrunner (Beep! Beep!) and make some dust! If running with a 50lb log on your back is your thing (yes, there's a guy that runs like that in my town), then by all means be the best Brawny Man you can be.
The thing to keep in mind is, "Is my method working?" If you have a really long stride and you heel strike, and you're having a lot of heel or lower leg problems, then you probably need to shorten your stride, or try more of a mid foot plant, or try a different shoe or no shoes. If a shorter stride is causing calf issues, then try lengthening your stride a tad. If that 50lb log is causing back problems, ditch the log. We're all different. What works for one may not work for another. Sometimes it takes trial-and-error to find what works best for you.
My buddy Josh, had chronic ITB problems. He finally ditched the shoes and became a barefoot runner and hasn't had that injury since (almost frostbitten toes, yes. ITB problems, no).
Posted by RunnerDude at Sunday, April 11, 2010

Great post, I couldn't agree more! I'm starting to look into a more minimalist/barefoot approach, but it's good to keep in mind that it may not be for everyone, including me. And picturing those 80s pants is almost too painful! Yikes!

I agree as well, its funny that you mention those pants because I am currently living in Istanbul Turkey and they are coming back!! I see these pants I call them "Alladin" pants. EVERYWHERE! I dont get it but I guess its a fashion thing now.

Hi Rachel! Those past are pretty frightening! LOL!! Definitley give the minimalist/barefoot approach a try. You may just love it. Keep me posted on how it goes!

I was misdiagnosed! It wasn't frostbite. Just a bad blister. Quickie barefoot advice: if it's 40 degrees and raining on a hilly(ish) half marathon course, don't run barefoot so fast you PR by 15 minutes. Especially with only a few months of barefooting experience.

Of course I think learning how to run barefoot would be good for everyone, unless you have a problem with being too smooth and efficient.

I love being called an elite runner, though. It's the barefooters catch-22: if you're fast, you can run barefoot only because you're "elite." If you're slow, well, imagine how much faster you'd be in shoes! Can't win.

Hey Josh! LOL! I said, "almost frostbite." LOL! Yep, I'm kind of honored to be the friend of an "elite." Do I have to call you Sir Josh now?

"Your Excellency" will suffice.

BTW Rachel: first read through Ken Bob's website: http://therunningbarefoot.com/?page_id=455
Running barefoot isn't just a change in equipment. To learn successfully, you have to change how you think about your feet, and running in general. For instance, pain is not something to be overcome or ignored - it's to be avoided at all costs. Like Alladin Pants.

I love this post! I had my third bout with IT band problems at my first half marathon this year. I decided to make changes in my stride to fix it. I've shortened my stride and am working on going barefoot too. I'm happy to say I have recovered from this round of ITBS faster than any other time. I'm hoping to be a full time barefoot and minimalist shoe person by the end of the year. I agree with if it isn't broken don't fix it, but if it's broken (like me) it's time to explore new ideas and techniques.

Running barefoot? No. Especially not with my husband, he spits when he runs, lol! But I love the Chi running method, it has really helped me a lot with my form and my breathing. I also think that it awesome that they are using Yoga!

thanks for the info josh!