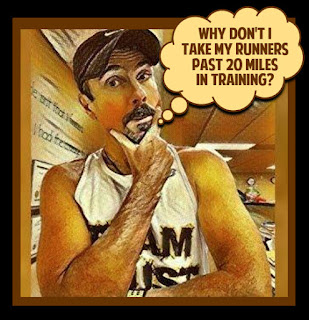 One of the most frequently asked questions by my marathon trainers is, "Why is our longest run only
20 miles?" It's a valid question. When they trained for their half marathon, their longest run was 13 or 14 miles so most would assume they'd run 25, 26, or 27 in their marathon training. Like in many cases with non-running circumstances, the obvious, may not be the best scenario.

The Internet is a culprit in making most novice marathoners think they should run the full marathon distance prior to race day. You can find all kinds of plans online that may or may not go past 20 miles during training. Then, you'll also have runners read about how the Olympians train and they'll see their 26-mile long runs and think, well, "They do it, why shouldn't I?"

So let's back up a bit and think about the structure of a typical marathon training plan. Online, most full-marathon training plans are 16 weeks. I create 18-week plans for my runners. But given a typical 16-week plan, the typical novice marathoner comes into training with a long run of 8-10 miles. If you start week one of training at 9 miles and each week progress by one mile you'll be at 23 miles the weekend prior to race day. That's not providing any taper (which is typically the last three weeks of training). So, you'll still not get to your full marathon distance and you'll not provide any taper in which the body has time to rebuild and repair prior to race day.

Also, as a coach, I like to get the full picture of a runner before I start training with them. Ideally it's best if a runner come into training with a strong base of at least a total weekly mileage of 20-25 miles the 4 weeks before their training officially starts. Most don't have this. So, I need to make sure that when they start the ease into their training and don't do too much too soon.

The other factor is pace. Remember those Olympians doing their 26-mile long training runs? Yep, they do such runs, but those Olympians are only out there on those long runs for a faction of the time that a novice runner will be. While they may be out there 2.5 hours, a mere mortal runner may be out on their feet for 4-5 hours. Lets assume that the Olympian and novice runner have an equal stride count (yes that is possible). In a 2 hour run, the Olympian may have his/her feet hitting the ground around  21,600 times while the novice could be making as many as 43,200 foot landings covering the same distance. Doing that week after week can really take a toll on the body drastically increasing the chance of injury.

I know you're thinking, but Ultra runners run much longer. Yep, they do. However, their training is entirely different from that of a road marathoner. Ultra running often takes place on trails providing a much more forgiving running surface. Also, ultra running's focus is usually geared more around completion rather than time. Ultra running also involves typically some walking. Fueling, hydrating, pacing, it's all a different animal with an ultra runner. Ultra runners also rarely run the full distance prior to race day. Kind of hard to get in a 100-miler prior to race day. Usually ultra runners will run back-to-back long runs on two or more consecutive days. It's more about time on their feet.

With some of my more experienced runners, I've used back-to-back long runs. Usually the first "long run" will be a more moderate distance maybe up to 10 miles, and then the following day will be a more traditional marathon long run distance eventually going up to 20 miles.

It's not that I won't or haven't ever taken a runner past the 20-miler, it's just not my typical plan of action. With a more seasoned runner who is willing to dedicate themselves to a longer plan (about 25 weeks) I can take them safely closer to the marathon distance in training and still have time to incorporate dropback weeks for recovery and the taper weeks at the end of the plan.

Properly training marathon runners is all about taking them where they are currently at fitness-wise and running experience-wise and gradually building upon that to reach race day. Another question I'm often asked, especially by running buddies after they've compared training plans, is "Why does he have this distance, and I have that distance?" Or "Why do I have this workout and my buddy doesn't? A coach writes his plans based on the individual. Sometimes that creates a variance in plans. That's a good thing. Doesn't mean one is weaker or stronger, It means you're at different places or have different goals.

Research, as well as my on experience with training marathon runners, has shown me that runners entering training with a really strong base prior to training, having a starting long run around 10 miles (for which they are already acclimated to), then strategically building their long runs with the goal of getting them really acclimated to the 18-20 mile distance by taper time will lead them into race day solid and strong. That extra 6.2 miles will not be a problem. They may feel those extra miles depending on how hard they're pushing it in the first 3/4 of the race, but they'll definitely be able to handle it. Bonking or hitting the wall, usually isn't related to not having trained those extra miles. Hitting the wall is usually a result of improper hydration and fueling during the race.
Posted by RunnerDude at Sunday, October 02, 2016