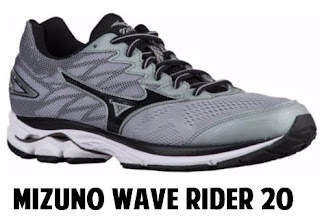 If you've been following me on Facebook, Instagram, or Twitter then you're probably aware that I've been struggling with finding a long run shoe. My favorite Hoka Huaka was discontinued and the suggested replacement just did not work for me.

So, I decided to go back to another maximalist shoe that I had previously worn the Altra Paradigm. I had worn several pair of the 1.0 and 1.5 version, but the new 2.0 version was revamped and in doing so, the shoe was created smaller. The 9.5 that I had always worn was now too small. My toes were actually hitting the end of the shoe. I returned them for a 1/2 size larger thinking maybe the 10 would fit like the old 9.5, but alas, the 10 was larger than the old 9.5 and my foot slid around. ARRGH! 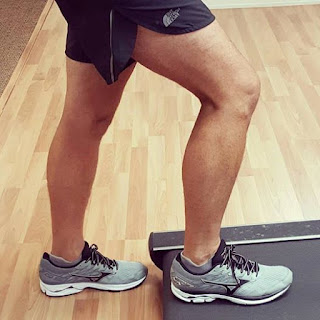 Desperate, I tried several other shoes, the Sketchers Go Run, the Hoka Vanquish and Clayton, and Asics 33-M, and one of the Adidas Boosts. None worked for my feet. Now don't get me wrong, all of these shoes work for other runners, I just have particular feet. With all the miles I put in with my job, I have issues with Morton's neuroma, dropped metatarsals, Achilles issues, etc. So finding a shoe that works with my feet and will accommodate my custom orthodic is problematic.

When a shoe company decides to do a major overhaul on a shoe or discontinue it all together, it's quite traumatic for me. Oh by the way, the company that makes my favorite short run shoe (the Pearl Izumi Road N3) is stopping making running shoes all together! What's up with that?!

The other day the owner of a local running store here in  Greensboro, NC dropped by with a pair of the new Mizuno Wave Rider 20 shoe for me to test out. I was excited. Could this be the shoe? I was a little skeptical because I haven't worn anything but a maximalist shoe for long runs for quite a while, but with none of the previously mentioned shoes working for me, I was more than willing to give them a test run.

Last year I ran 4 marathons and the beginning of this year I started with my first 50K with very minor foot issue...because my Hoka Huakas were working fine, but then when I wore out my last pair, my shoe woes began. I'm currently training for the Richmond Marathon. We have about 15+ runners going to Richmond to run the full and the half. So, I was really excited to be able to run with my runners. But, due to my shoe and foot woes, I've gotten way behind in my marathon training. Last Sunday, however was a glimmer of hope. 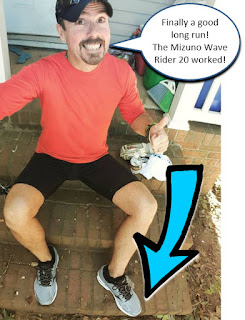 On Saturday, I tested the Wave Rider 20 on a short run without my orthodics. They felt really good during that run. But it's the long run that's the real test. I have several shoes for which I can get in a good 8-10 miles before my feet start giving me problems, but after that, my feet begin to break down. My fore foot has so little natural padding, that I need a shoe that had good fore foot cushioning. My sports med doc told me he's never seeen a foot with so little natural padding. And for some other foot issues, I need to wear my custom orthotics on the longer runs. So, the trick is finding a shoe with good forefoot cushioning that then will also accommodate my orthodic and not be too tight.

On Sunday, I tested the Mizuno Wave Rider 20s on a long run. I ran 17 miles with the orthodics in place and the shoes felt really good. Another good sign was that after the run, I wasn't doing the old-man shuffle like after many of my recent runs. Just the opposite happened. My feet felt pretty good. And other than just a little stiffness from the miles, I felt great.

The version 20 is actually revised version of the 19 and in this case (finally) the revision is good. Mizuno has included an entirely new Wave plate technology for a softer, smoother ride with an even more responsive feel. And I have to say that my run lived up to the hype. This is a more traditional shoe with a 12mm heel-to-toe drop. I usually wear a lower drop to account for the extra thickness my orthodic adds, but with this shoe, it seemed to work well. I've decided, that for me, the lower drop was contributing to my Achilles issues. Keep in mind that this is my experience. Lower drop shoes work great for many runners. I just have picky feet. The Wave Rider 20 isn't your lightest trainer, but at 9.6oz, for the responsiveness they were providing, they felt pretty light. I was really pleased because many of the maximalist shoes I've been wearing felt heavy and clunky. Never thought I'd go back to a more traditional shoe for my long run, but hey, never say never.

Posted by RunnerDude at Wednesday, October 26, 2016