Saucony 8mm: They Read My MInd! 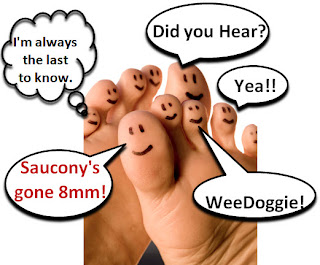 For the past year or so, I've been reading so much about the barefoot and minimalist movement. One consistent thing that crops up in both camps as well as even the traditional running shoe camp is that the traditional 12mm to 13mm drop from heel to toe may be contributing to (if not promoting) heel striking which over time can spur on several running related injuries. But, if you're like me and have some foot issues, barefoot is not an option. Even the minimalist shoes (for me) tend to only work for moderate length runs.

Recently I've been dealing with two dropped metatarsals in each foot which has caused the second toe on each foot (the one beside the big toe) to hurt. I feared one may even have a stress fracture. Luckily that wasn't the case. Here comes the quandary. My minimalist shoes helped relieve the pressure on the ball of my foot, but prompted other issues on long runs. My more traditional shoes provides the needed support on the long runs, but put me up on my heels causing more stress on the balls of my feet.

So, what's a biomechanically challenged runner supposed to do? I had been thinking for several months, "Why can't you just lower the heel keeping the integrity and original support provided in a traditional running shoe? Why do only minimalist shoes get the lower heel?" Well, I think Saucony had a spy planted in my head, because I'm happy to announce that they're launching a new line of shoes with my thinking as the basis for the shoe. Okay, well, it was their thinking. :-)

Their new 8mm line is actually taking existing shoes (the Progrid Guide 5, the Powergrid Hurricane 14, the Powergrid Triumph 9) and reducing the height of the heel-to-toe offset from the average 12mm to 8mm. This is awesome news! Now it will be easier for you to land further midfoot, striking with less impact, giving you greater stability and control. 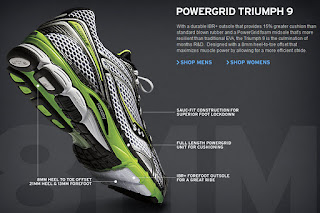 This lower heel will provide for great alignment. At 8mm your ankles, calves, knees, quads, and hamstrings are in better alignment and are better able to absorb the impact of the road. Also, just the fact that you'll be able to  have more of a midfoot landing will allow you to work with the road, not against it, creating less impact.

The lower heel will also provide great suspension. The new alignment puts you in a more spring-like position, and works with you body's natural ability to coil and rebound.

Saucony is sending me a pair of the 8mm Powergrid Triumph 9. My running shoe of choice is the traditional version of the Triumph so, I'm very excited to see how a shoe I already love will work with a lower heel-to-toe offset.

So, stay tuned! As soon as I've received the shoes and put in several good runs of different distances and intensities, I'll be posting my review. I'll also be giving away a pair of shoes from the new Saucony 8mm line.

It's so cool when your wishes come true!

Posted by RunnerDude at Saturday, November 19, 2011

I am so looking forward to the lowered Guide. When I put on my Guide 4's this morning they felt really strange. And I love them.

Oh, that is awesome! I can't wait to hear how they feel on your feet!

I just started running in the Saucony Peregrines and so far they have done everything you are talking about. They allow me to land on my midfoot/forefoot much more easily than other recommended or motion control shoes for me lately.

No I like the feel of the 8mm shoes, it is a much more natural stride and actually makes going uphills/inclines more of a "rolling" motion instead of the heal first down slap that I used to have.

Good luck and I hope that you like them as much as I do.

I hope that works out for you! It can be really hard trying to figure out what works best on your feet for distances!