Recently, I had the opportunity to test two products from Saucony. The first product is Saucony's version of a minimalist shoe—the Progrid Kinvara. I've tested a lot of shoes over the past two years, and I can honestly say that this shoe tops them all. I've been testing the minimalist waters and the shoes that I've tried have worked well, but the Kinvara worked great for me right out of the box. 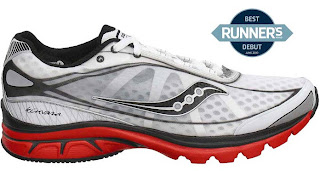 The first thing I noticed is how lightweight they are—only a little over 7oz! The second thing I noticed is the amount of cushion they provide. I have very little natural padding in my fore foot and heel, so I need a good cushioned shoe. The Kinvara's cushion rivals the cushion of Saucony's Progrid Triumph shoe, which is my personal favorite neutral trainer.
It does take a little getting used to wearing the shoe. There is very little heal and if you're wanting to work on more of a midfoot/forefoot strike this shoe's construction allows you to do this very easily. Just be sure to test them on some shorter runs first to let you body get use to the lower-to-the-ground construction.

The Kinvara won't break the bank, either. Retailing for $90, it's right in line (maybe even on the lower end) of other running shoes on the market today.

Runner's World also like the shoe and gave the Kinvara its prestigious "Best Debut" award for 2010. Here's a video review from Runner's Word's Warren Greene. (My test results ended with my having pretty much the same conclusions as the Runner's World testers—Awesome!)

The other Saucony product that I had the opportunity to test and also had great success with is the men's Epic Run Vest in the ViZiPRO color. As runners find themselves faced with shorter daylight hours, I discovered that Saucony is working hard to ensure safe running with its highly reflective ViZiPRO Collection. The ViZiPRO collection provides enhanced visibility with its bright neon orange color. The collection features jackets, footwear, sport tops, vests, hand gear and head gear, both in women’s and men’s sizes. According to industry-standard chromaticity testing results, Saucony’s ViZiPRO fluorescent orange fabric rated highest in visibility within the running industry. 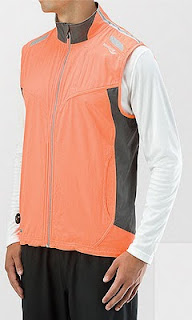 I have training groups that run in the early evening, and when the time change recently occurred we had to don head lamps and/or carry flashlights to see our running routes as well as let drivers see us. On one of these dark runs I tested the Epic Run Vest and it was very light weight. It kept the cold air out but was breathable at the same time.

The vest is made of 100% woven polyester with water-resistant DWR coating. The outer shell is constructed with reflective piping down the sleeves and along the front zipper. There's also reflective mesh panels on the front shoulders and along the back hem. The vest also sports lots of pockets including a media pocket for an iPod or MP3 player. The vest even comes with a removable USB LED light that's rechargeable by inserting it in your computers USB port. You can leave the light hooked to the jacked and set it to flashing mode or you can remove it and set it to steady beam and use it as a flashlight. The bright neon color and reflective piping and panels worked very well.

If you're having to do any runs in the dark, I highly recommend Saucony's line of ViZiPRO shoes and apparel. Both products, the Progrid Kinvara and the ViziPRO Epic Run Vest, receive 5 dudes out of 5 dudes on the RunnerDude's Rating Scale!
Note: While Saucony did provide the Progrid Kinvara shoes and the ViZiPRO Epic Run Vest, I was in no way encouraged to write a positive review nor did I receive any form of payment for writing this review. This review is based entirely on my personal experience using both products.
Posted by RunnerDude at Saturday, November 13, 2010

I love my Saucony shoes. Light shoes make me nervous, though, and I would hesitate to try the female version of these on.

I think you can even get the Kinvaras in the Vizipro color. Bot of those look like good products to me...

I love your blog! Every post I read makes me feel like it was worth my time to read it. I've heard so many great things about these shoes. Thanks for the well written review.

Hey RunnerDude - LOVE Saucony stuff. All of it. Great reviews of the products. I also love your blog even though I don't always comment :)

Hy Cynthia! Minimalist shoes aren't for every runner. Might be worth taking a test drive in them the next time you're at your local running store. I was really surprised.

Hi Turi! You're right! The Kinvara's do some in the ViZiPRO color. They look pretty cool, too.

Hi Amanda!Thanks for the support and the kind words!Greatly appreciated.

Thanks Caratunk Girl!!I enjoy your blog and Tweets as well!

I think some of that Vizipro stuff is going on my wish list! thanks for the reviews!

I've tried them, very nice but I'd not call them minimalist. Way too much heel and foam.

They're more of bulky racing flat, certainly reduced compared to other Saucony products.

Hi Boris! Yep, they're not like some minimalist options, but the Kinvara's heel isn't any higher (may even be a little shorter) than Newtons.

I have the same issue with my feet -- no padding in the forefront. I call them my cheese wedge feet. Anyway, for $90, I'm definitely interested in seeing these shoes would work for me.