Trust in Your Training and Stick to the Plan 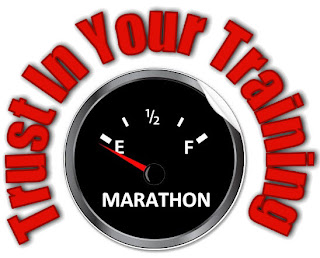 Distance running, especially the marathon, can really play with your mind. Some of the "mind games" that occur during a distance race are actually protective mechanisms that kick-in when your brain thinks you're in danger. These alerts to the brain can be heat related, hydration related, or fuel source related, just to name a few. Your brain is rather amazing. It's a better sensor and monitor of your body systems than any computer could ever be.

You know when you're in the car-rider-pick-up line at your kid's school and you're buried, deep in the middle of the line (no way out) and your gas light comes on? Can you feel that panic? Probably makes you anxious just thinking about it. But after that initial fear passes, you remember that you have a few gallons left in the tank when the light comes on. So, you put the car in park and turn off the engine instead of idling. Knowing that little reserve is there, is very reassuring. The real fear is if you remember that the light came on several times the day before and you ignored it, and now you're not exactly sure how much gas you have left. Of course that's also the day your kid is running late and is the last one to make it out to the pick-up line.

Okay, you're probably thinking, where is he going with this....don't worry, there is a connection. Your brain is like that gas gauge and your body is that couple of gallons of reserve gas in the tank. Sometimes when you push your body to extremes, the self-preservation mode kicks in and your brain will actually try to slow you down. If during the race, you're running low on your carb stores, your brain can actually fatigue your leg muscles in order to slow you down. Why? Well, your body needs fat in order to survive. All the little nerves running through your body are actually coated or wrapped in something called a myelin sheath which is made of fat. If the body thinks you're dipping into your fat stores for energy, it may feel threatened and begin to fatigue your muscles to slow you down. Also, your brain needs carbohydrates in order to function. If it feels threatened that your carb levels are getting too low that can also trigger the fatigue.

The thing to know is that you're body actually has more energy in reserve and more than likely you're not in danger of running out of steam. Now let me back up a step. You're not in danger if, and let me stress IF, you've trained and fueled properly. If you've carb-loaded prior to the marathon and you've been drinking water and/or sports drink and using gels periodically throughout the race to keep your glycogen stores stocked, then you can actually override your brain by telling it that you're okay. No really, you can actually talk your brain out of the self-preservation mode by reminding it that have the fuel you need to continue. The verbal reminder and self-talk will actually help reassure your brain that you're not in danger. Now on the flip side, if you haven't put in the training nor properly fueled or hydrated yourself prior to and during the race, then you need to heed the warnings and slow it down.

A different kind of mind game that often occurs during an endurance race is self-doubt. Did I train hard enough? Should I have done an extra 20-miler? Did I hydrate enough? Did I hydrate too much? Will I look silly? Am I too old for this? What was I thinking???!!! When that nasty old self doubt creeps in, quickly kick it to the curb. Having a mantra or a phrase of encouragement or inspiration is great to repeat to yourself to keep that self-doubt away.

There's one thing I tell my clients over and over, "Trust in your training." It's a simple phrase but a powerful one. It even makes a great mantra. If you've put in the work and you've properly fueled yourself, then trust your training to carry you across that finish line. Now, that's given that you don't throw all your hard work out the window and run like a bat out of hell at the starting gun immediately depleting your glycogen stores in the first 2 miles of the race. Stick to the plan and your plan will stick with you.
Posted by RunnerDude at Thursday, September 09, 2010

Thanks Abbi! Hope all is well your way!

The analogies in the beginning of this were really well done, nice article.

I agree - so many have gone before - you need to follow to the end.

You can start doubting when you experiment and tune at the top - not when training!

How do you refuel during your long runs and marathons. I've read conflicting approaches to refueling; from its not necessary to you need 60 grams of carb per hour. I have been experimenting with gels vs more solid fuels and sport drink alone with mixed results. I'm five weeks from my first marathon and still not confident with my nutrition approach.

Hi Robert! The key is stocking up your glycogen stores prior to race day. About three days out, don't add to your calorie count, but swapout some of your proteins and fats for more complex carbs (whole wheat and whole grain pastas, breads, veggies). Then two days out start swaping out some of the complex carbs for simple and the day before should be more simple carbs. You don't want too much bulk in you on race day so weening off the complex to simple like that will help. Your glycogen stores can hold about 2000 calories. That will take you about 2 hours or 18-20 miles depending on your pace. Lots of runners bonk at this mileage point because they literally run out of fuel. Unless you're an elite runner and finishing around 2 hrs, you're gonna need some extra fuel. Everyone is different in how they achieve this. Personally I take an Accell Gell (it also has a little protein) about every 45-60mins. The key is taking them before you need them. If you're beginning to feel fatigued, before your take the energy source of your choice then it may be too late. Some runners like the chews and others like real food like bananas or a peanutbutter crackers or something like that. Hydration is just as important, especially if it's a hot/humid day. Dont' wait until you're thirsty to drink. I drink 100% coconut water on my long runs because it naturally has all the needed electrolytes and it's really high in potassium which helps keep my calves from cramping.
Okay, sorry to have rambled on. I'd keep it simple. Carb-load beginning 3 days prior to race day and then have your additional fuel source with your for the race. Just be sure (and I can't stress this enough) to use a fuel source and hydration source that you've tested/used in your training. Don't use something new or something you maybe only used once during your training. Hope this helps.

Excellent, I really needed to read this before my half on Sunday! Thank you. :-)

Hey Forward Foot Strides! Best of luck tomorrow on your half! You'll rock it!!!