And the Ask the Author Winners are.... 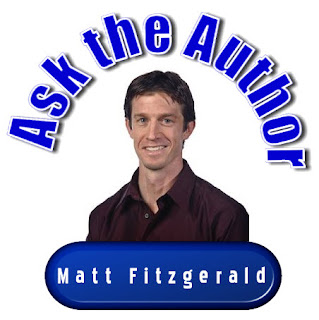 Thanks to everyone who submitted a question to Matt Fitzgerald, author of the new book, RUN: The Mind-Body Method of Running by Feel. And thanks to Matt for taking the time to answer them. The winners of RunnerDude's Ask the Author contest are listed below along with Matt's replies. Each winner will receive a free copy of RUN!

Question From Wayne Ball: Ok, so this may be better answered by Ritalin but how do I keep focused on my body/mind during runs? While running I do attempt to listen to my body (breathing, heart, aches & pains) but my mind wonders incessantly.
Matt's Answer: Wayne, there's absolutely nothing wrong with letting your mind wander when you run. It's good for you. The only time it's necessary to really focus on running while you're running is when you are pushing against your limits, and in that circumstance such focus becomes automatic. (Try to do long division in your head in the last 400 meters of a 5K!) My book, RUN: The Mind-Body Method of Running by Feel, is not about teaching runners how to think about running while they run. In fact, the best runners actually think the LEAST while they run. That quietude of mind is itself a product of a strong mind-body connection. Read my book to learn why.

Question from Caleb Kinney: I recently suffered from a metatarsal stress fracture. How much rest do you recommend during a training week and how much rest is needed preceding and following races?
Matt's Answer: Caleb, the optimal amount of rest varies between athletes and even for the same athlete at different levels of fitness and experience. The most effective way to determine how much rest you need is to listen to your body. It will always tell you and it's never wrong. You just have to listen and know how to understand what your body's telling you. I discuss how to develop and use this mind-body connection in RUN: The Mind-Body Method of Running by Feel.
-
Question from Erin Grantham: Recently, I've been having a left calf issue. I usually stop, stretch and get back out there. Lately, I've noticed I'm starting to get tingly in my feet (almost like coming back from it being asleep when running!). I usually just power on through it but now I'm wondering if that is such a smart idea. At what point do you say, this pain is preventing gain and just STOP. And how do you differentiate between what good pain and bad pain should feel like? I guess to sum it up...how the heck do I get in tune with my body?
Matt's Answer: Erin, that is a key challenge in running, and one I address thoroughly in RUN: The Mind-Body Method of Running by Feel. Only experience combined with paying attention can teach us to discern the difference between normal pain and what I call "red flag" pain. But I believe it always remains necessary to take some risks in training, and that the occasional injury is an unavoidable consequence of pursuing performance in running. Accepting this reality can itself be helpful, though.

Question from Tina Wardlaw: I use the book Run Faster to come up with workouts and I'm glad you've written a new book. I read a short portion of it and you wrote that if you have a problem fading at mile 20 of the marathon, you might want to run back-to-back 20 milers, or a long run with 14-16 miles at marathon goal pace or a 27-30 mile run before your goal marathon. Do these suggestions apply to middle-of-the-packers like me or just the speedier set? Those look like tough training runs!
Matt's Answer: The point I wanted to make in the section you read is not that marathon runners with a bonking problem should try those specific workouts. Rather, the point was that all runners should feel free to get creative and trust their intuitions to come up with possible solutions to the barriers they face. So, if your intuition tells you those example workouts would be too hard for you, they probably are! So, what does your intuition suggest as an appropriate alternative?
-
Question from Marcus Grimm: One of the things I enjoy most about your books is that it's pretty obvious that you try virtually everything you write about, from nutrition and supplements to gear and training programs. However, like all of us, I'm sure that some things that you've tried have become critical staples in your own personal training whereas others, long-term, haven't given you the benefits you'd hoped. I'd be curious to know which of the subjects you've covered have become vital to your training over the years. Would be curious to know, as well, of any that didn't work out for you, realizing that with everything, it's always very personal.
Matt's Anwser: Marcus, Interesting question. If you are familiar with my past books you know that I have long favored a nonlinear approach to periodization, where high-intensity training is in the mix throughout the training cycle. But I learned the hard way that this approach creates a risk of becoming stale and overtrained before race day. You feel on top of the world 10 weeks into the training cycle, but the wheels come off after 14 weeks. So I've since shifted to a periodization approach that blends nonlinear elements with linear elements. High intensity is still always in the mix, but I keep it dialed back until relatively late in the training cycle. As for practices I've held onto, I've always been a big believer in strength training, including heavy weightlifting, and the older I get the more convinced I become of its importance.
-
Question from Mark Ulrich: As I'm inspired by Alberto Salazar's success in revising the running form of Alan Web, Radcliffe and Goucher, and cognizant of Dr. Jack Tupper Daniels' observation that all top athletes maintain a running cadence of ~180 steps per minute (spm), over past month I've begun applying the Evolution Running recommendations to improve my own running form. Being an engineer by education and hoping to approach this process systematically I've found that I've been successful at speeding-up my running cadence (which by default had previously been close to 165 spm) by listening to Podrunner techno tracks, which have highly percussive fixed beats per minute approaching the Daniels' determined optimum of 180. By concentrating on a quiet mid-foot landing with a slight forward lean from the ankles I'm encouraged that a better running form has emerged. I judge this improvement by my recent ability to simultaneously increase both my total weekly mileage and my pace versus my prior efforts, and feel that the new form is less jarring and flows smoother than my former slower cadence heel-landing stride. Using the treadmill as a means of me simultaneously avoiding the oppressive summer heat while allowing me to discern whether the 180 spm cadence is applicable across all paces I feel that it's not. I.E. when I speed the treadmill (at 1.5% grade to make its pace equivalent to running with normal wind resistance) 30-seconds faster than my goal marathon pace, that holding my cadence at merely 180 seems unnatural - based on the acceleration of my breathing rate which I use as a gauge to my exertion - i.e. drifting to a cadence close to 185 reduces my exertion level. Conversely, when I run on the treadmill at a pace of 30-seconds or more slower than my goal marathon pace I find that my optimal cadence correspondingly slows somewhat, i.e. closer to 177 spm. With that lengthy background, my multi-part related question (sorry!) is....

Matt's Answer: Mark, a stride rate of 180 per minute is commonly observed in elite runners, and so is a marathon pace of 4:55 per mile. I believe that turning the former observation into a prescription for all is no wiser than turning the latter observation into a universal prescription. In other words, saying, "Run at a stride rate of 180 per minute because the elites do," is not unlike saying, "Run your marathons at 4:55/mile pace because the elites do." I believe—and the best scientific evidence suggests—that all runners find their optimal stride rate unconsciously and automatically, given the totality of their running mechanics. Therefore, artificial efforts to impose a higher stride rate are more likely to decrease than increase efficiency. Stride rate can increase, but this will only happen in a beneficial way as a consequence of getting faster. So I recommend you focus on getting faster and let your stride rate take care of itself. I've generally moved away from my previously held belief that conscious manipulation of stride mechanics is a good idea, and I explain why in RUN: The Mind-Body Method of Running by Feel.

Posted by RunnerDude at Friday, September 10, 2010

Great questions and answers. I especially liked the one about back to back runs - just makes me realize that I do know what I'm doing with them!

How fun! I can't wait to read my new book! Matt's answer explained things for me. Thanks, Matt and RunnerDude!

Hi Cynthia! Cool to be reassured like that, huh?

Hi Boris! Thanks and thanks to Matt!