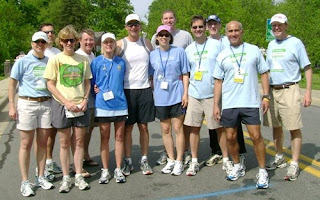 The other day at a group run sponsored by a local running store, a friend of mine overheard a "serious runner" commenting on my running group—The BlueLiners. "They're just a social group" was the comment, said with a little distain in his tone. I was a little surprised to hear this. Runners are usually more supportive of fellow runners. Maybe he's envious of the camaraderie he's seen of our group as we pass by. Whatever the reason for his opinion, I'd just like to go on the record and say that there's nothing wrong with socializing being a part of any running group. In fact, I think it's a crucial element. If everything is 100% running, training, racing, faster, harder, better, then I think you increase your chances f 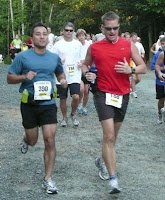 or an early burnout.

Besides, learning about the lives of your fellow running buddies helps to build some of the best friendships of you'll ever have. I bet I could send out an email to my fellow BlueLiners asking for help with something and I'd get 80% of the group responding within 5 minutes. Now, some of those responses would be witty retorts, but most would be genuine responses offering assistance (even the witty ones would want to help). The BlueLiners group is a very diverse group of runners. Some run purely for the social interaction, others are trying to lose weight/get fit, while others have specific racing goals in mind. The age ranges from the 20s to the 60s. On our Saturday morning long runs, we begin as a group and eventually break into various pacing groups. Afterwards, we head for coffee and bagels! Some group members also meet early Tuesday and Thursday mornings for a 5-mile run.

I’ve discovered that I do much better when I run and/or exercise with friends. It's amazing how a long run (or any run for that matter) with a group seems to go by faster and is much more enjoyable than going it alone. Whether you’re starved for attention, nee 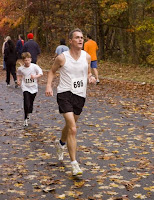 d that extra diversion to help get you through those last few miles of a long run, or you enjoy the camaraderie or competition of running with others, it does seem to help. Actually it may even be good for your brain to run with others. Scientists even believe that the generation of new neurons (neurogenesis) is increased in the brain when a person exercises in a group.

I've learned so much (running lessons and life lessons) from the youngens to the elders of the group. Plus, for "just a social group" we have some pretty good stats. At least 10 of the group (that I can think of) have run Boston (some more than once). One BlueLiner even won her age division at Boston. Not too shabby! Go BlueLiners!

I love the social running. I think it makes the miles go more quickly!

I agree, especially on really long runs. If you've ever trained for a marathon by yourself and then trained with some running buddies, it's a much more enjoyable experience with your buddies.

Yay Thad. Blueliner pride. I think you're right: anyone who badmouths the Blueliners is probably envious of a group of people who enjoy each other. And even though we run the SAME DAMN COURSE every Saturday, having different partners among the group keeps it interesting.

Thanks Lisa! I'm not suggesting a route change though. You saw what happened with the whole Port City Java thing. LOL!!

How can I find a beginners running group in my area?