No Better Time Than the Present

Are you a non-runner? Have you been thinking about running but think you're too overweight, too old, or think you'll look funny in those little running shorts? Well stop thinking and just get out there. All runners, even the ones that look like Nike models, had to start at some point. And yes, they too felt awkward, clumsy and probably hurt like hell when they first started. But, rest assured that feeling soon passes when you see your goal of a fitter you becoming a reality. You don't have to be a Jackie Joyner-Kersee, Carl Lewis, Lolo Jones, or Usain Bolt in order to benefit from running.

Think you're too ov 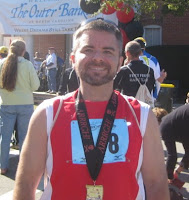 erweight? Think again. A friend of mine and fellow running buddy, Wayne, once was overweight. He's 38-years-old and has weighed as much as 220lbs. Before he started running, he weighed 205lbs. He's been running now for 2 years and his weight is down to an amazing 165lbs! Wayne ran his first marathon (The Outer Banks Marathon) last October and did it in 4:08! That's 18 minutes faster than my first marathon! What motivated Wayne to finally start running and lose weight? His desire to set a healthy lifestyle for his children, to be a better husband, the desire to eliminate a history of family medical problems, and a 40" waist. Joining nine of his friends and colleagues in a weight-lose challenge also gave him the motivation to start.

Think you're too old? Think again. The Runner's World article "Running Through the Ages" (March '08) shows how a runner's body strengths, weaknesses, and nutr 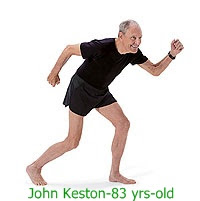 itional needs change over time. It profiles 14 runners aged 17 to 85. One thing that struck me about the senior runners, is the age at which many of them started running. 67-year-old Seiko Tamura started running at the age 44. John Keston (83-years-old), started running at age 55. Margaret Davis (85-years-old), started running in her late 70s. Margaret has run eight marathons (5:37 PR at age 80) and 11 half-marathons (2:42 PR at age 80). She says the best part of her running is that she gets people thinking, "If I she can do it, I can do it." I also once read about a lady who started running in her 70s. Her plan was to "add a mailbox each day." You see, each day she would run a little further by making it to the next mailbox in her neighborhood. Eventually she added enough mailboxes that she signed up for a triathlon!
Still need a little push to get you out there? Maybe the following 10 reasons for running will be just what you need.

Not sure where to start? Check with the local running clubs and/or running specialty stores in your community to see if they have any programs for beginning runners or try using The Runner's World 8-Week Beginners Running Program. This plan is designed to get you to the point of running 30 minutes (about 2 miles) at a slow pace. Once you get to that point, you'll be ready to increase your mileage by 10% per week.

Before making any changes to your normal routine, please consult with your physician.

I got the pleasure of getting to know Wayne through a running group that I coached last year...what a fantastic guy!

Hey Marisa! Wayne definitely has a quiet determination that's very inspiring. Glad to have him as a fellow running bud.