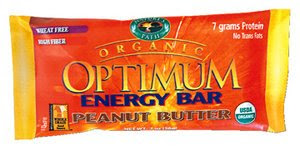 in the 80s. I remember thinking the first one I ever ate tasted like a piece of cardboard and I think I chewed on it for hours! Well 20+ years have brought vast improvements to energy bars at least in taste and texture. Recently I saw that Snickers had an energy bar. Because a candy company had entered the energy bar market, I began to wonder how good these bars really are. So, I did a very unscientific study. I purchased several of the popular energy bars and did a nutrition label comparison as well as a taste test. I found some interesting results as well as probably gaining a few pounds. 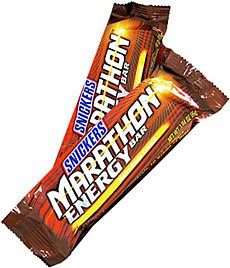 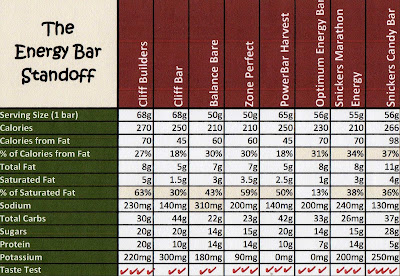 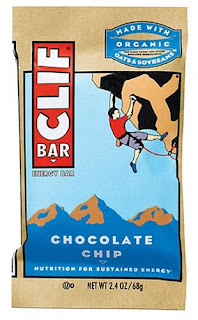 e and portability. A banana slathered in peanut butter makes a great energy snack and most likely packs just as much muscle repairing protein and cramp preventing potassium as an energy bar. It's a heck of a lot cheaper too! But, I have to admit, it wouldn't travel too well on a long run. As convenient as energy bars are, they can reak havoc on some runners' digestive systems. So, be sure to test out new bars well before race day.
Which bar is my favorite? Well, taste-wise, Cliff Builders was the best, but it has way too much saturated fat for me. My favorite over-all bar would be the PowerBar Harvest. Still a little heavy on the saturated fats, but its overall percentage of fat from calories was low as well as its total fat content. And, it tastes pretty good too!
There are some great bars out there that pack a lot of energy and/or recovery-rich nutrients, but read the nutrition labels carefully to make sure you're not doing more damage than good.
Posted by RunnerDude at Friday, March 20, 2009

Great post!! I can't get over how many bars are out there...it's overwhelming!

Hey Denise! I know what you mean. I just selected a few to review. I also discovered that there are a lot of start-up enery bar companies that sell their products only online or only in nutrition and/or sports shops. And there are so many different types of energy bars now—protein bars, recovery bars, goes on and on...

Good point Chris. Lots of people are scared of fat because they think it's bad. As long as you keep the saturate fat to about 10% of your fat for the day your fine.