Running Rub You the Wrong Way? 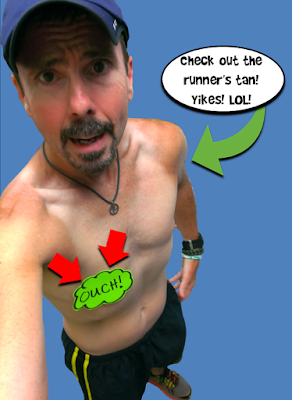 Does running rub you the wrong way? No, I mean literally? If you've ever been a victim of runner's
rash or chafing. you know it's no fun. There's nothing worse than being out on a 10-mile run and halfway through you realize the skin between your legs, in the nether region, is ready to ignite. Well, maybe not realizing you've actually chafed until after the run when the shower water hits the irritated area and you scream bloody murder bringing the entire family into the bathroom, is worse...not that that's ever happened to me.

So, who gets it and why? Really it can effect anyone. Overweight and skinny, new runner and seasoned. Everyone is fair game. Typically chafing is caused by friction between skin and fabric, but it can also be caused by skin-on-skin. Men often experience the skin/fabric irritation at the nipple area on the chest. I've seen a few male runners finish a marathon looking like victims of drive-by shootings with two red dots centered on both pecs followed by a bloody trail down their singlets to their shorts. Not a pretty sight. Women often experience similar chafing in various areas around the straps of their jog bras. I once ran shirtless in only my running shorts, socks, shoes, and my hydration belt. The run went fine. When I later got in the shower I discovered (the whole family did too when I screamed in pain as the shower water hit me) that I had a huge welt at my waist where the belt rubbed me raw and I didn't even know it.

Skin-on-skin chafing often happens between the thighs, but it can happen elsewhere too. Heat and humidity often make great conditions for chafing. So, those of us living in the hot humid South of the USA, are well aware of summer chafing woes.

Below are a few tips for how to prevent chafing and how to deal with it if you already have it.

1. Wear clothing with a closer fit. Men, I've found that singlets and running shirts that fit more snugly in the chest area, reduces the movement of the fabric therefore decreasing the friction between the fabric and your nips. Also, pay more attention to the fabric of your shirts. Not all technical fabrics are the same. Most technical running shirts are made of 100% polyester. Even though two different shirts may be made of `100% polyester, the design of the weave can really make a difference in moisture management and texture. The weave of the fabric can really play a big part in whether it's abrasive or not to your skin. So, when you're in the running store, don't just  buy the coolest looking shirt. Buy the one with the softest fabric. Many technical compression shirts incorporate Lycra or spandex in with the polyester which makes it stretchy and softer. Now I'm not a big fan of the compression shirts that are so tight I feel like a sausage casing when I put it on and start to wheeze because I can't expand my lungs enough to get in air, but I have found they can be useful in decreasing friction. However, when I buy a compression shirt or singlet, I don't buy it for the compression, I buy it for a closer fit. So even though I usually wear a men's small in a normal shirt, in a compression shirt I'll often get a Large. The large doesn't squeeze the life out of me but it gives me a closer fit than a regular shirt.
Same idea applies to shorts. Running shorts with a lot of excessive fabric may increase the chance of chafing. Also, shorts with a really long crotch may allow skin-on-skin contact that can cause chafing for some. So, buy shorts with minimal leg fabric. Compression shorts are also a good option in reducing fabric-on-skin friction. I see ladies wearing compression shorts and 3/4 running tights all the time. Guys if you don't want all the world to see your manhood, you can wear the compression shorts underneath a pear of running shorts. I've found, if I'm going to do that, cutting out the built in liner of the running shorts is more comfortable when pairing running shorts with compression shorts. 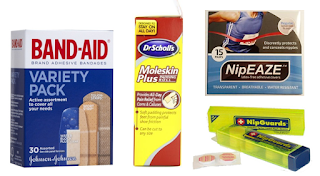 2. Cover it up. Tried altering your clothing and still having chafing issues? Then try covering the affected area(s) with a physical barrier. To protect your nips, try covering them with bandaids. The circular bandaids work well. I've discovered that the waterproof bandaids work best, especially if you sweat heavily. They work so well, in fact that once I used them I discovered I had two water balloons on my chest after finishing a marathon. Kind of embarrassing, but funny too. Felt kind of like a stripper with pasties. Another neat trick it to use Dr. Scholl's moleskin and cut your own round protective covers to place over your nips. The off-brand moleskin tends not to stick as well or as long, so pay a little more for the Dr. Scholl's. There are also products such as NipGuards and NipEAZE which are similar to bandaids, but desigend especially for runners to protect runners' nipples. 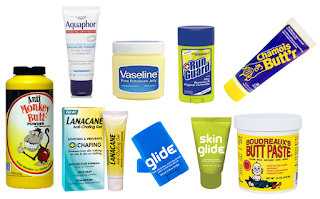 3. Slather it on. If a physical barrier doesn't work, try a topical cream or salve. There are many different topical products that you can wipe on, massage in, or roll on the affected areas in advance of your run to prevent chafing or to protect and already chafed area during your run. Some of these you may already have in your medicine cabinet. Vaseline and Aquaphor are two such products. Both can be used to help prevent chafing or to deal with it after you already have it. I've found that Vaseline is a bit messy, stains, and wears off quickly, but in a bind it's better than nothing. Aquaphor actually works really well. It lasts pretty long and doesn't seem to stain like Vaseline. It's also a great soother for chafed areas after the run. Another product you can find at the local pharmacy or drug store is Lanacane's Anti-Chafing Gel. This applies like a gel but quickly dries like a powder. Works pretty well. There are also many anti-chafing products made specifically for runners and cyclists. They include Body Glide, Skin Glide, Run Guard, Anti Monkey Butt Powder, Boudreaux's Butt Paste, and Chamois Butt'r. I personally use and like Body Glide. It comes in a container much like deodorant and you apply it to your skin much like you would deodorant.

4. Try it before Race Day! Whether it's race day clothing or one of the anti chafing products mentioned above, be sure to test them out on several runs prior to race day. Never, never, never, never wear new clothing on race day. Best to discover the shorts you purchased are really an inner thigh torture device disguised as running shorts during a training run rather than on race day. Same goes for the anti-chafing product sample somebody hands you at the race expo. Do not use it on your tender little nips or nether regions on race day if you've not tried it on a previous long run. You don't want to run the risk of it just plain not working or worse, having an allergic reaction to it!
Posted by RunnerDude at Friday, June 26, 2015

For nipples, I previously used Run Guard which worked better and is a bit cheaper than Body Glide. No matter which brand I used, they left stains on my shirts. Very awkward for a man to look like he has lactation stains. Now, I use 3M medical tape. I can't remember what the package calls it, but it says Transpore on the inside of the roll. Way cheaper than band aids or nipguards. That stuff stays on really well. Never had a problem with it coming off, used it during races up to 50k, which is a long time for someone as slow as me. Quick warning, trim the hair around your nipples first, makes it much easier and less painful to get off.

I also really like the 2-in-1 style shorts. Still put Run Guard near the man bits for long runs just to be sure.