Don't Sabotage Your Workout With A "Reward!" 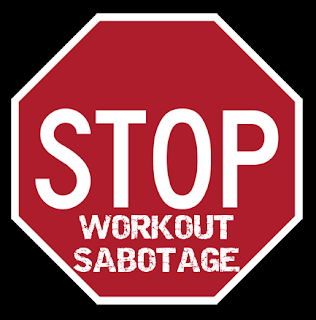 We are definitely a reward-based society. Every time we do something good, we want to be rewarded
or recognized. Nothing wrong with a reward, but let's save it for the big stuff, like finishing training for your first 5K race, crossing the finish line of a Marathon, or setting a new PR, not for finishing your Wednesday night workout.

We have all been guilty at times of using our "workout" as justification for having that treat. "Oh, I just worked out. Now I can have the beer, candy bar, triple chocolate brownie, sundae, or those fries....oh those fries."

Keep in mind that the stats above are for 60 minutes of solid working out. Not one hour of doing some reps, talking with a friend, doing a few more reps, talking to another friend, and so on.

Big box gyms often come equipped with a smoothie or juice bar. Nothing wrong with that. I've even played around with the idea of offering them here at my fitness studio. Problem is, if you're not the one making the smoothie, you have no idea how many calories are going into that smoothie.

For example, Smoothie King's 20oz High Protein Chocolate Smoothie has 366 calories. So for my one hour of heavy weight lifting, I netted out with a burn of  6 calories, if I treat myself to this smoothie! BUT.....keep in mind ,the 20oz is their small. When I 've been at Smoothie King, I rarely see a person order a 20oz, unless it's for a kid. Usually patrons are ordering the 32oz or the 40oz. For that same Chocolate smoothie, the 32oz packs 549 cals and the 40oz packs a whopping 732 calories. So, if I ordered either of the 2 larger sizes, I've just taken in 177 or 360 more calories than I actually burned working out. Maybe if I had  run for 60 mins the 20oz would be an appropriate refueling snack post workout. When I do my long 20+ milers, I make a pretty high calorie smoothie. I've burned about 2500 calories on the run and my smoothie that I make myself contains about 565 calories and is about 20oz.

You can quickly see if you're not aware of how many calories your burning and what you're treating yourself with post workout, you may just be sabotaging all your hard work. Now I'm not trying to make Smoothie King or any smoothie shop the bad guy. They have a product to sell and for the most part it's a good product. I've never been in a Smoothie King where they've tried to push the 40oz "The Hulk" strawberry smoothie with  1928 calories on me. It's up to me as the consumer to know what I'm eating or drinking.

So how much should you eat after a run? In her book, Food Guide for Marathoners, sports nutrition guru, Nancy Clark recommends you take in 200-400calories comprised of about 50-100g of carbs and about 10g of protein within an hour of running. I tell my runners to try and get it in within 30 mins of completing their run. Now keep in mind the range of 200-400 calories. 400 calories is more appropriate following a really hard speed workout or long run, while 200 calories is more appropriate following an easy run. My smoothie is a little more than the 400 calorie limit, but like I mentioned earlier, I only drink that after a 20+ mile run. Twelve ounces of 1% chocolate milk has 240 calories and 16g of protein. making it a perfect post-run recovery snack for a shorter less intense run. Other good options include Greek or traditional yogurt with added fruit, a bagel with peanut butter, an energy bar (be sure to read the label for calorie and carb/protein content), a peanut butter and banana sandwich, spaghetti with meat sauce, or a turkey sandwich, etc.

Celebrate the small gains you make in your fitness and running with the satisfaction of a job well done, and save those "treats" for the big long-term accomplishments. Save those extra calories for that celebratory victory meal with your friends and family.
Posted by RunnerDude at Tuesday, June 16, 2015