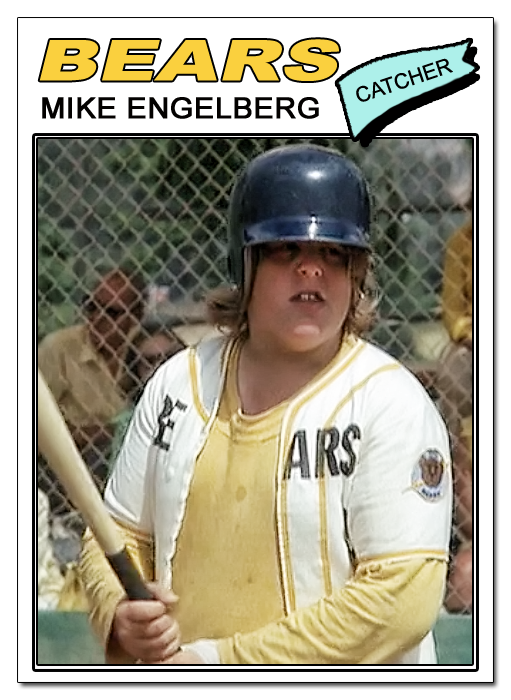 When I was in elementary school, I played baseball for 2 years. Hated every minute of it. I was basically Engleberg from The Bad News Bears except I played right field. The first year I played we had to wear those old scruffy, itchy wool uniforms. Remember this was in the early 70s. There I was, the pudgy kid in this itchy as heck gray wool uniform out in right field, praying hard the ball wouldn't come my way.

I knew from day one of practice that I was not cut out for baseball. I think it was when the ball popped up and smashed into my face that I had that epiphany. Somehow I made it through a second year of baseball. A short career (so I thought). Maybe if Tatum O'Neal had been on my team I would have lasted longer.

I figured I was supposed to be the fat kid in the plaid pants. You know the happy-go-lucky kid who always had a joke to tell. Back then, if you were "husky" (as they so politely called it) you had very little options for clothing. And it seemed that the designers at the time believed that fat kids looked best in plaid. Better yet, plaid pants with reinforced knees (guys you remember Sears Toughskins?).

That's how it played out for the rest of elementary school and middle school too. My older brother played baseball, football, basketball, and tennis while I ate twin bags of Lays potato chips on the couch after school watching General Hospital. My best friend Dennis, however, was a gymnast. I always admired his bravery to be the only male on the gymnastics team. He was probably the strongest guy in our class, but he took a lot of ribbing from the other guys.

Looking back, it wasn't really that I wasn't athletic or didn't have athletic potential, it was that I was not a team sports person. Because there weren't any alternative athletic activities (or at least any that I knew of) it was just assumed I was non-athletic and thus an oddball. My 8th grade PE teacher used to love picking on me in class. I still have nightmares of trying to climb that rope that hung from the gym ceiling. I wish I could challenge him to a road race now.

The summer before high school (circa 1979) I decided to lose weight. I went on Weight Watchers and lost a little over 40 pounds. During my freshman year we had to run the mile in PE. The previous year in 8th grade, the mile had been torture. That year I ran the mile in 18:20 (and yes I was wearing plaid pants and wallabees). This time it was different. I ran the mile in under 8 minutes. By no means a world record, but I was astounded. For the first time, I realized I could actually do something athletic. I still didn't have the confidence to go out for cross-country or track. Even after losing weight you still feel like a fat person on the inside, even though the weight is gone.

About 5 years later I ran my first 10K. This was around the time (in the mid 80s) when road races began to gain some popularity with "average runners." I was hooked. I finally found my niche. Something athletic where I could compete against myself...or others if I wanted.

Running has taken me many places and provided me the opportunity to meet many people from all walks of life and eventually has become my career. Who'd a thunk that the fat kid in the plaid pants would become RunnerDude!

Children today as well as adults have so many more opportunities to be involved in exercise. If you're a parent, be observant and foster the activities that interest your child. If you're an adult, be willing to explore different options until you find what clicks. It might be baseball, soccer, walking, running, kick boxing, or hot yoga. Doesn't matter—just get up and move!

I think I'm going to see if I can find me some plaid running shorts. :-)
Posted by RunnerDude at Thursday, March 20, 2014

Wow. Thanks for sharing. I hope your post and experiences inspires other children to become active, and eat healthier. I see so much childhood obesity!