Not Just a Statistic 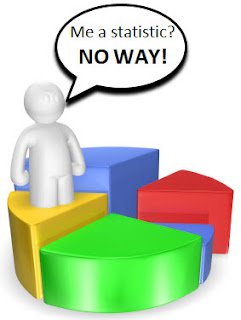 “Statistic.” On the surface it’s a fairly cold word. Bland data. Heartless. Void of feeling. Just a number. About a month ago, during a doctor appointment, I became a statistic. Like a light bulb that shatters from a surge of electricity when you flip the switch, I realized that all those statistics actually represent people and suddenly, way out of left field, I was one of them.
What had begun as a routine follow-up visit at the dermatologist ended up something way beyond routine. The doc was checking to see how the medicine she prescribed for some dry skin on my face was working. She was really pleased to see it had cleared up. Upbeat and chipper, she asked if there was anything else, I needed.  I asked if she would mind taking a look at a mole on my back that my wife had encouraged me to get checked. The previous upbeat tempo of the earlier conversation came to an abrupt halt as if a thief had just walked into the room.
After lifting my shirt, I heard nothing. Silence.  That nothingness was the thief that had crept into the examining room just a second or two earlier, stealing all the air out of the room. I couldn’t breathe. When my lungs finally expanded, I realized the doc was asking if anyone in my family had skin cancer.  I said, “Not that I know of,” but soon realized that no sound was coming out of my mouth. I eventually managed to eek out an audible, response.  She asked how long I'd had the mole.  I told her that I had noticed it about six months ago and at the time had my family doc look at it. He thought it was okay, but said to keep an eye on it.
The mole was in the center I my back; I actually couldn’t see it. So, like so many things….out of sight, out of mind. I had forgotten about it. But earlier in the week, my wife saw me changing shirts and said, “You really need to get that checked again.”  I told this to the doc and she said, “Your wife probably just saved your life.” She had me roll over, injected the area in question with something to numb the skin and proceeded to scooped out a pretty good chunk of me to send off to the lab. She wouldn’t, couldn’t, confirm anything, but said that I’d get the results back next week from the lab.
Luckily, I didn't have to wait that long. The doc called me personally the next day. The news hit me like a brick. Melanoma. The rarest and most aggressive type of skin cancer. Numb, I asked her what the next steps were. She explained that she’d make an appointment for me with a surgeon at Wake Forest Baptist Medical Hospital in Winston Salem. They would more than likely do a more invasive removal of the skin from around the area the mole was located and possibly inject radioactive dye into the area to see if it drained to a lymph node. If it did, a biopsy would be done of the lymph node. If cancer was found in that lymph node, then the surrounding lymph nodes would be removed and probably other types of more rigorous treatments would be implemented. The phone call ended with, “Your wife really did just save your life.”
Stunned….a statistic….a number, but determined I waited for the consultation with the doc at the Cancer Center at Wake Forest Baptist Hospital.
After a long 4 weeks, the consultation finally took place today. Well, I thought it was going to be a consultation. Turned out the doctor at the cancer center wanted to do the procedure today. A little shocked and overwhelmed, I headed to the operating room with my wife. I was a trooper and with my wife's support I did well during the surgery.
With a rather large hunk of me missing, I’m now the proud owner of a 5” incision down the center of my back. I’ll know in about a week if the tests come back negative.  As I tell my runners when in training… "Trust. Believe. CONQUER!” That’s exactly how I plan to tackle this unexpected life-bump in the road. 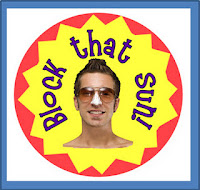 About a year ago, I posted on the blog an article I’d written title “Runners!Block That Sun!" never knowing I’d be writing about me. Please read that article and re-read it if you’ve already read it. Runners do tend to have a higher incidence of skin cancer. I’m proof of that. Also, check your body thoroughly (everywhere) for moles. Have your doc check them out. If you don’t have a spouse or significant other, get a running buddy to check your back. Like I said, I can’t see the spot where mine was located. Don’t let modesty keep you from finding a questionable mole. If you’re a runner, it’s probably a good idea to have your doc check your moles at least once a year.  And heed the words of wisdom my doc gave me as I left the hospital today, “You now love sun block. You will wear sun block every day. Sun Block is your best friend.”
Posted by RunnerDude at Wednesday, December 14, 2011

Wow. Wow. Eye opening. Prayers are with you. I always remind my runners about sunblock, but can't hurt to send out another reminder.

Wow, scary and so good you found it. I'm thinking twice about how often and what sunblock I need to use, thanks for the post. It hits home.

Wow. I'd love to know what characteristics your mole had that promoted your wife to urge you and the derm to react as strongly as she did. Glad you got it checked out and hoping for the best for you!

She described it as looking "angry." It became raised and the borders became irregular.

As someone who has lots (and I mean lots) of moles, I go to the dermatologist at least yearly, sometimes every 6 months to get them checked. I've had over 50 removed, luckily none of them have been melanoma, but many have been pre-cancerous or abnormal and would have developed into something bad. However skin cancer does run in the family...ironically with my mom and grandpa, who don't have any moles. Thankfully your wife urged you to get it checked out! Anytime you have anything suspicious, whether it's a mole that looks weird (or "angry" as your wife called it!) or it's a spot that just won't heal, you should get it checked out. Moral of the story...SUNSCREEN SAVES LIVES!

Thank you so much for sharing this with us Thad. My wife and I will be praying for you and that all goes well. Good thing for you having a loving and caring wife that will notice something like that. My Gradfather had melenoma and was good after treatment (6 years ago) Well, I am glad you went to the Doctor's. Wishing you well.

Thanks for sharing his. I'm one of those runners who tends to not bother much with sunblock. I'll be bothering now!

I hope the test results come back good!

Thanks Lesley, Paulette, Lindsay, Woods1, Kenley and Andrew! Your support means so much!

Best of luck and thanks for sharing this. Good reminder that I need to see my dermatologist, it's been too long. I do have a family history of melanoma, and have had a "dysplastic nevi" before.

Best wishes for you, I'm sending tons of positive energy your way. I actually just got checked out yesterday by my new doctor for the first time. I felt happy that she didn't seem too concerned by anything, and happy that she checked.

My step-dad pretty much was in your same situation, with my mom telling him to get a spot looked at. And thank goodness she did! That was a few years ago and he is now cancer free ... and always in sunblock and long sleeved shirts just to be safe. The good news is they can get rid of it if they catch it fast! So glad you listened to your wife and got checked out!

Take care of yourself! :)

First off, I'm so glad to hear that you caught this and sought medical help, as many people remain ignorant of this potentially deadly form of cancer. I'm definitely sending lots of positive energy your way and hope that your words reach a wide audience to encourage them to get checked as well. As it turns out, I'm running next year's Boston Marathon on behalf of the Melanoma Foundation of New England and encourage you or any of your readers to view my website (http://www.firstgiving.com/fundraiser/billfine/RunningforCover_Boston_2012). All the best!

Prayers for you. I need to get my husband to get some things looked at.

i am wondering if you can tell me about your recovery process. I had a shave excision of a melanoma about a week ago and I will be having a wide excision and it seems similar to yours. I was wondering what your recovery was like? I hope you are doing well with yours as it has been a few years now.

Hi Fenzway-girl! The recovery went really well. The punch biopsy that I had initially was worse cause you had the little crater you had to clean and cover with vaseline. The worst part of the surgery was the needle to deaden the area. I could feel tugs and pulls after that, but no significant pain. After the surgery, I as covered with something ling clear packing tape for 3 days. I could shower like normal. Then I removed that and what remained were the stera strips on top along the incision. I just had to be carful after bathing when toweling off, but that was cool. I thought it would take longer but after a week when I went back, some of the strips had come off (which the doc said they would) and then he took the rest of them off. The incision looked raw, but he said it was healing well. I could lift heavy weights for a while and because it was between my shoulder blades, my back felt tight. It took a couple of months for the skin to relax I guess, but now its fine. I have skin checks now every 6 months. Doing fine. Hoep this helps. You'll do great! So glad you caught it!!