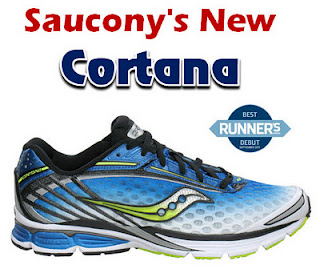 If you're wanting a more flexible responsive shoe, but tend to be a mild to moderate overpronator and still need a little support and guidance, the you may want to check out Saucony's new Cortana. It's gotten rave reviews and won several awards including "Best Debut" from Runner's World Magazine, September 2011 and "Best New Shoe" in Running Network's 2011 Fall Shoe Review.

I've always been a big "the proof is in the pudding" kind of guy, so while reviews go a long way with me, I still like first hand experience to make my final decision. Saucony sent me a pair of the Cortana about  two months go and I've been testing them ever since. In this case the "pudding" is pretty dang good.

While not really a minimalist shoe, this shoe is like a souped-up racing flat. It's very flexible, but also provides a touch of guidance. It contains Saucony's PowerGrid technology the entire length of the shoe which is what provides great cushioning. The other feature that I really like is the 4mm heel-to-toe offset. This "close-to-the-road ride" really helps promote more of a midfoot or forefoot strike. The shoes are very light weight at only 10.7 oz. 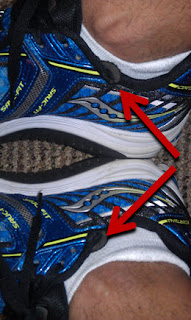 I've run exclusively in the Cortana since I received them in August. I've done short tempo runs, speed work and longer runs up to 14 miles. In each case, the shoes were very supportive while at the same very flexible and cushy. The only thing that was a drawback was the the upper began to fray pretty quickly near the ankle area. For a shoe in this price range ($145), I expected the upper to last a little longer. Now this may be due to my particular stride, but I've not had other Saucony shoes' uppers wear so quickly. I think it's just the particular fabric used. The fraying doesn't affect the shoe's performance at all however and wouldn't keep me from purchasing a second pair.

So, if you're looking for a low profile, flexible, responsive and cushy shoe, I highly recommend the Cortana! And.....you're in luck! Saucony is giving one free pair of the Cortana away to one lucky RunnerDude's Blog reader!

WIN A FREE PAIR! To enter, simply send an email to runnerdudeblog@yahoo.com. Put "Cortana" in the subject line and your full name in the body of the email. You have until Saturday, October 15th to enter! Each email will be assigned a number in the order that it was received. Then the TrueRandomNumberGenerator will be used to select the winning email number. The winner will be announced on the blog on Sunday, October 16th. Good Luck!
Posted by RunnerDude at Wednesday, October 05, 2011

Hi Caratunk Girl! I really liked them. Of the Kinvara, Mirage, and Cortana, I like the Cortana best. Just had that little extra I need.

Great review! I've been thinking about checking out the mirage, but now I may have to check these out instead.

Thad- Great review. Saaucany has come out with some great shoes with minimal heel to toe drop. I've been running in the Kinvaras & absolutely love them. I've run up to 16 miles in them but I'm afraid to run a marathon in a shoe with zero support. So, I just picked up a pair of Mirages, which have a bit of support. I like them, but they're quite a bit stiffer than the Kinvaras. Now I'm wondering if I should be considering the Cortanas. Can you distinguish between the Mirages & Cortanas (other than the Cortanas' heft price!)? Thanks.

Hi Aimee! I like the roomier toebox of the Cortana.

The Mirage is a good shoe too and similar to the Cortana. The mirage has more midsole support than your Kinvara. The Cortana does too. The Cortana is a tad heavier than the Mirage which is about 8.9oz. The Cortana is good for a runner looking to work on form. The 4mm difference from heel to toe really promotes good ground contact and supports a more flat foot strike. The Cortana (to me) seems to have a wider toebox than the Mirage, which I like. Hope this helps.

Thad - Thanks. Sounds like they're all great shoes. I do know that the 4mm heel to toe drop sure has made the midfoot strike easier. The wider toebox on the Cortana sounds nice - I do find the toebox a little tight on the Mirage. Well, I guess I'll just have to win your contest!

I SOOOOOO want these!!! I just ordered my 2nd pair of Kinvara's only because I couldn't afford the Cortana :-( I love my Kinvara's but think that I would love the extra padding in the Cortana. Hopefully they will come down in price some.

That's a great looking shoe! I really appreciate the feedback on these.

good timing for me, as i am in the process of switching from my Adidas to something else. tried asics gel runner 5's, but the gel hits the ball of my foot in a way that makes it hurt after 8 miles. not a good start to a marathon!

I just won a pair of these for best letter in Men's Running magazine (UK).
Can't wait for them to arrive and hopefully they will be here next week so I wear them in a local 10k on Sunday.
I'm a minimalist runner wearing Merrell Trail Gloves so the support in the Cortana will be a new experience for me.